It was a good afternoon last week when I was eating pie with my girls and just kidding around. It was an added joy to have Amara join in our laughter and follow up with her cute "oooo" face that she does so well. Steve calls her little pucker "her blue steel." It's adorable! 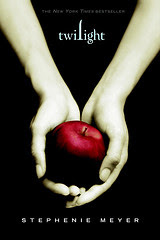 I was convinced by Elinn (Steve's sister) and Mandy (My sister-in-law) to read the Twilight series by Stephenie Meyer. I purchased the book and read it together with Steve. I'd have to agree with Steve that the book can get really ooey-gooey when describing the undying beauty of the vampires (Edward especially). But, that didn't stop me from wanting to read on with the following books (It stopped him, but he went and read a synopsis online for the rest of the books so he knows what happens). I read the 2nd book (New Moon) this past weekend. I haven't read a book by myself that quickly since Harry Potter 1-3. I've got to admit that I'm going through withdrawals while the library is currently out of their 5 copies of the 3rd book (Eclipse). I can't wait to see the movie, but even more, I can't wait to read the rest of the books. Steve tells me that there's a rumor that Stephenie Meyer is writing a sister series of Twilight but with Edward as the narrator. I hope that's true!

Wishing and Hoping,
Lani
Posted by Stephen Christensen at 8:00 AM 2 comments:

This is a must see for those who need a smile. It's a short video I shot after our 1st swimming trip (back in July when we were vacationing). Lily was hungry and Amara wanted to "talk". We are at Steve's parents home.

When she wants to, Amara will stand and walk for us. It's really cute to watch her tiny body move.
Posted by Stephen Christensen at 9:27 AM 1 comment:

Today, Lily wanted to do her own cooking show, so I grabbed the camera and recorded away. It's about 2 minutes long. She called her creation "a long treasure hunt" on camera, but later when she was eating her creation, she called it Raisin Pie. In case you want to make one of your own, here's the recipe.

Spread yogurt on the graham cracker and top with raisins.

She came up with this one on her own. I am quite impressed.

You can't even tell the difference!

I can't say that I've ever been mistaken for Eva, but I think most people realize Eva couldn't afford my clothes and my personal trainer and my naturally-pleasant overall appearance.

Here's 2 of the cutest sisters hanging out. Can you tell what Lily's story is about?
Posted by Stephen Christensen at 2:48 PM 3 comments: