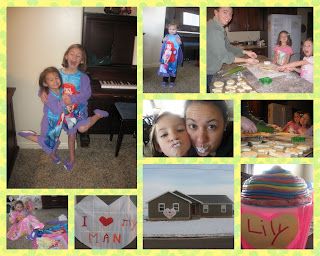 Some people like to read about Valentine's Day in the month of February, but there must be others out there who long for a report on "the day-of-love" in the month of April (ahem, very last day of April to be exact).  For those cherished few, the first third of this post is for you!

There was a lot of love that went on in our home this Valentine's!
---------Moving onto the next topic, HAIRCUTS! 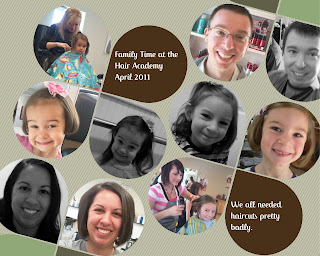 Over Steve's Spring Break in March, we (meaning me) decided that everyone needed a haircut and that it would be a fun family activity to do together.  I scheduled us all for appointments in Vernal at the hair academy there, and for $20 plus tip, we all got our lovely haircuts!  Amara didn't smile most of the time that she was getting her hair cut, but she didn't cry and she was happy as soon as she didn't have to hold still anymore.  Lily enjoyed her haircutting time and surprisingly, she was the first to go back, yet she took the longest to be finished.  Check out our before-and-afters in the collage above.  Click on the collage to make it bigger.

----------------Lastly, But Not Leastly... VOLUNTEERING!
I volunteer once a week to visit a sweet lady named Viola who lives in a nearby senior center.  She turned 101 last month, and I just had to be there on her birthday to say hi.  She doesn't usually remember who I am, yet she is so friendly and acts as if we've been friends forever.  I noticed that she likes to wear an orange flower clip in her hair, so for her birthday, I thought I'd give her more flower clips in other colors, and some fudge- it's her favorite.  She is so healthy and full of life.  She's an inspiration to me and she's a dear friend to all she's acquainted with. 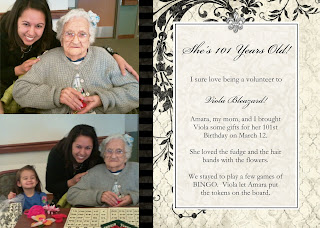 Me, my mom, and Amara showed up while she was playing BINGO, and surprised her with her gift.  Then we stayed, and she let Amara put her chips on her BINGO board.  It was fun and Amara wants to go back and play again with her.
Posted by Stephen Christensen at 7:53 PM No comments:


Shenannigans... April (the person, not the month) inspires fun and surprises.  She came for a surprise visit last month (sorry so late in blogging), and she came to my house while my mom was at work.  Well, we had some time to concoct a plan to surprise mom.  After I put my girls to sleep, it was time for some fun.  My mom had no clue April was in town.  I had called her and asked if she wanted to go out shopping with me and she agreed and suggested that we shop for April and her baby.  So, I disguised April in some of the clothes and accessories I found around my house and I dropped her off at the family dollar.  Then I went and got my mom and we headed to the family dollar to go "shopping."  You'll have to watch the video to see the look on mom's face when April surprised her.  She was shocked!  I was lame and couldn't hold in my laughter.
Posted by Stephen Christensen at 1:22 PM 2 comments:

I know it's been a month ago, but better late than never.
Let me take you two days before Steve's birthday...

Me: So, Steve, your birthday is coming up soon.  What would you like to do that day?
Steve: Nothing.  Just let it be a normal day.
Me (a titch irritated): No way!  You only get one birthday a year and we all want to celebrate you.  Do you want me to make you a special meal or do you want to go out to eat?
Steve (a titch irritated): O...k...  I guess... go out.
Me: Alright, I could make a special dessert for you.  What do you want?
Steve (after a little thought): Brownies with chocolate chips, peanut butter chips, and caramel.
Me: Wow.  Okay, your wish is my command.  What about birthday gifts?
Steve: I don't know.  (Pause.)  How about install a new jack for the modem in the living room so we can bring the computer out.
Me: Do YOU really want to be doing that on your birthday?
Steve: (no response)

Two days later... Steve's birthday arrives!
The kids and I pick him up from work ready to go out to eat.  Granted, there are very few options for eating out where we live, but you know where he chose?  McDonalds Drive-Thru, of all places.   All I have to say is, after 7 and a half years of marriage, I was totally expecting that, and no, I'm not offended that he chose McD's over my cooking; however had this been 7 years ago, I probably would have been.
Next, Steve's birthday gifts...
Through some miracle, the phone company was able to swing their guy over to install this lovely jack, so the modem and computer can now be out in the living room, and Steve didn't have to do it.  It was a good thing too, Steve admits, because we would have had to end up calling the phone guy to come out anyway because Steve had no clue what to do once he got down in the crawlspace. 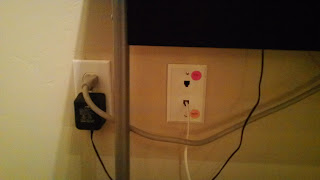 I also bought him some soft earphones for his Ipod.  Their called "marshmallows."
And last, but not least, we ate the mega-brownies he requested.  Steve was really surprised and excited to see that I was able to move the computer out into the living room (thanks for your help, mom) AND, that it was all hooked up to the internet and running smoothly.  He had a happy 34th birthday.
Posted by Stephen Christensen at 6:22 PM No comments: