Lily's Kindergarten Shots (back in June 2010) 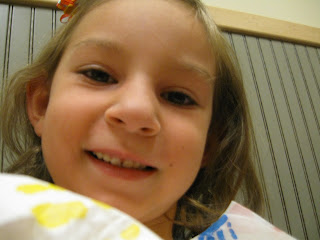 I've meant to blog about Lily's Kindergarten shots (K-shots) ever since she got them a few months ago.  I don't remember how Lily found out that she had to get shots before she went to Kindergarten, but somehow she knew.  "Mom, I don't want to go to school if I have to get shots"  she would tell me.  We talked about her kindergarten shots weeks before she had to get them.  I'd try to make her feel better about getting them.  I told her of when I had to get my shots.  "Back when I got shots, I had to get 5 of them right on my bum.  I was afraid, but after it was over I realized it wasn't too bad.  Plus, I got a sucker when I was done."  My stories seemed to calm her nerves a bit, at least for a few days.  Then, "Mom, are they going to give me shots in my bum?"  she would ask.  I would tell her I wasn't sure where they were giving shots these days, but that she would be fine.

Well, the day arrived and it was time for K-shots.  We got ready to go, and Lily wanted to wear a dress so she wouldn't have to pull pants over a fresh wound.  Steve and I tried to make her happy and a little more calm.  I gave her our digital camera to take pictures to make into a scrapbook.  She liked that idea and it was a wonderful distraction.  If you're interested in looking at the photos she took, I finally compiled them for your amusement:
When it was time for shots, Lily's bravery ran low and we had to break out some of our best bribes to get her to quit her thrashing and kicking on the doctor's table.  I bribed with stickers and movies, Steve promised she could go to a buffet and eat as many desserts as she wanted.  Lily eventually held still enough for the nurse to poke the 4 shots in (the nurse held her legs down and I held her arms).  She let everyone know of her pain and frustration by channeling all her energy into her scream.  Amara looked on with concern and then told her dad, "Is Lily freaking out?"  Ha ha ha!  To say the least.
Posted by Stephen Christensen at 7:01 PM 1 comment:

Slideshow of Jake and Kelli's Wedding

It's about time I post something about my youngest brother getting married.  Jake and Kelli got married August 21, 2010 and it was a beautiful wedding with lots of family and a great luncheon and reception.  We're so happy to add Kelli to our family.  She is an absolutely adorable and genuinely kind person.  Here's the slideshow:


...AND to exercise your smile muscles, here's Jake's engagement story revisited (from his blog).  It's worth a thousand reads.
"I'm engaged.
Now, for 25 whole years I have lived a life full of fun, full of memories, and now I'll have a new one, of a girl, a girl, that's right, a girl.

I met this girl one day at a classroom where I work. As she entered in, her hair blew like a model in a magazine, her eyes fluttered like butterfly wings, and she looked at me, and "eye" at her. She didn't smile, but I did. Then she returned it. And I was happy. A year and a half past by where we were friends, words were exchanged on facebook, hangouts were arranged and implemented, and much to my surprise she still didn't like me. She left to London and she took her heart with her, she didn't leave me a piece. I would find her on facebook and ask her how her day was. She would respond. And I was satisfied. The time came when she would return to BYU and therefore be in the valley of Jake Lauret. We set a date to go "hangout." I wanted to surprise her, but she surprised me also by writing her name, full name, in the dirt on my car. She imprinted a name which will never be forgotten in the life and memory of Jake Lauret. I didn't regret it. But she did. A semester past and we did things every once in a while. And I would leave her windshield wipers up on her car every time I was in the area. The time came when she needed a job and I had one in the same classroom as me, where she had volunteered at in the past, where I met her.

I hooked her up with the job. Once again, she walked in through the door, wind blowing through her hair, eyes a-flutter, and this time her smile was at me, instead of the other way around. And at that moment I knew, something was going to be different.

During this time, I had arranged to move out of my parent's house and move into her ward. By so doing, we were in the same FHE group. I knew that I would be having a lot of face time with her and I knew that that was the key to her heart, because seriously, who wouldn't absolutely adore a face like mine? And then, um. Things just got really crazy from there. .

Um. She held my hand first. I held it back. We cuddled, never kissed, but there was much embrace. My stomach was filled with butterflies (figuratively speaking). My knee was shaking up and down like a piston in a car. I was sweating like a weak WWE wrestler before his match. After the meshing of hands, we parted ways and I went to bed with a smile on my face. A couple days later, it was late, we were hanging out, and we were in her car, and we decided that we liked each other. THE END!

j/k. We dated, we did homework, we laughed, we cried, we argued about bugs, and other little things like that. And after dating a couple months, I decided that it was time to move on with my life. I decided, I wanted this girl in my life. Therefore, I came up with a plan to engage myself to this woman to whom I would want to be wed to. I shopped for rings, I planned activities, and I even planned a day to ask for her hand and ring finger in marriage.

The day was April 24, 2010. I decided that I would propose at high noon. So, I texted her at 9 in the morning asking her if she would be willing to go on a picnic. She texted back saying, "Ask me in an hour." I then said, "ok." And then, I called the person to whom I would pick up my engagement ring. I told him I was to propose at high noon that day. He said, he would not be available to do that and that I would not be able to pick up my ring. He continued, that I could pick it up at 3:00. My plans were foiled to propose at high noon. A new plan was devised to go shooting across Utah Lake to pass time. The time past, the jeweler called, the ring was ready and I could pick it up. We finished shooting and I arranged for the picnic. I chose to have the picnic at Utah Lake. One special reason was because we exchanged valentines gifts there. As for the picnic food, I made sandwiches, we had a pineapple, carrots, and drinks. I tried to act as normal as possible as to not deter her mind that she would be proposed to that day, that hour, and that moment. We walked up and down the pier of Utah Lake. We came back to the spot of the origin of the picnic, and there we danced to music coming out of my car. And as we were dancing, it was then that I told her how much that I loved her, and I got on one knee, specifically my right knee, and I asked after reaching into my pocket and pulling out the ring, if she would marry me. She then teared up, paused, like they do on TV before they reveal their answer, and I knelt there until she answered. And she said yes. And then, we were officially engaged in eachother forever until we get married, which is August 21, 2010. There is no reason behind this date besides that it is the most convenient. THE REAL END."
Posted by Stephen Christensen at 9:44 AM 2 comments: