So, for $6 a piece, we could've got our faces painted at the circus.  Well, my daughters begged, and I resisted.  I told them, "I've got paint at home.  We can paint your faces there."  Two days later, family night rolled around and the girls didn't forget that I said we could paint their faces.  I just hoped their expectations weren't too high.  I only had 3 colors of finger paint for them to choose from and I couldn't find a paintbrush anywhere in the house.  So, our activity for family night was "Lani gets to fingerpaint using her daughters' faces as canvas," and the colors to choose from were purple, black, and orange.

Well, Amara had seen some kids have their faces painted like animals, so she wanted to be a pig.  I didn't have pink, so I thought orange would be close enough, and that I would just paint around her nose.  I tried to give the look of a pig's nose by using black to enlarge her nostrils.  She turned out looking more like a tiger?  Maybe.  Actually, the only resemblance of a tiger was the colors I used, orange and black. 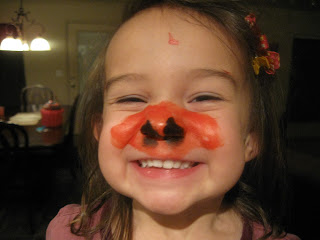 Lily, wanted purple on her face like a flower.  I started painting and things just got ugly from there.  I tried to go for the look of a sweet purple pansy, but she ended up looking like... well, if an exploded eggplant got together with a luchador from Nacho Libre and had a baby, that's what Lily looked like. 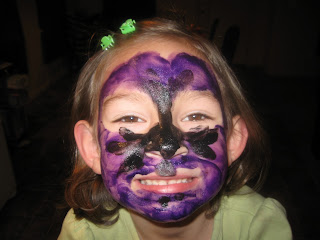 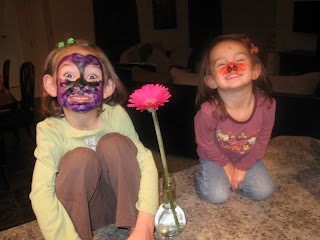 I was laughing so hard inside I would've pulled a hernia if I didn't at least burst a few laughs out.  I just hoped they would find as much amusement in their mother's 60-second finger-painting escapade.  Then they ran down the hall, headed off toward the mirrors.  Their reaction is was documented by both our Canon
Digital Camera and Steve's new Ipod Touch.  Comparing the 2 videos, I think the Ipod has better color, sorry Canon.  So, without further ado, their reactions as recorded by Steve's Ipod Touch...

Posted by Stephen Christensen at 9:43 PM

OH MY GOSHH! This is so stinkin' hilarious!!! Especially the part that you told them this was permanent paint. ahaha! The look was C.L.A.S.S.I.C more like DEER.IN.HEADLIGHTS. Lani, I wish I could blog you as my daughter coming up with such quirky fun times as part of watching you grow up. lolol! Great clip Steve!

Okay, I have to tell you that I seriously laughed so hard when I read this post! That is hilarious! I still crack up when I read your description of what you thought Lily's paint job looked like.

Getting your face painted at the circus- $12

Spending at night at home painting faces and freaking your kids out- priceless!