Here's a picture of Lily with the winner of the pinewood derby, Lani Christensen.  Actually, my car didn't win the derby, it won the "most unusual award," an accomplishment I'm thrilled to have acheived.  The box of Capri Sun was my prize.  Yay! 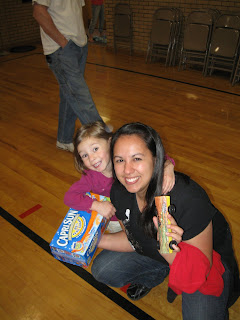 This past Friday, the Elders Quorum held a pinewood derby.  Everyone was invited to participate.  Steve and I both made cars to race, and we had a blast.  Steve's car was carved in 20 minutes (or less), approximately 2 hours before the derby started using his survival knife, then he had Lily and Amara use markers to color it.  I had hacked at my car with some useless excuse for a knife until it had some curve to it and so many imperfections that my design options were grossly limited.  I used finger paint and markers to take my rustic wood carving to it's roots, the woods.  See for yourself... 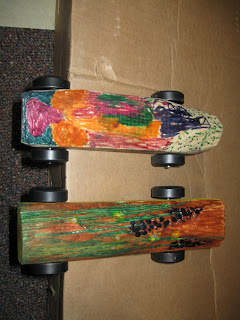 When I asked Lily what I should name my car she simply stated, "Probably you'll name it Tree Hope."
We had a good turn out at the pinewood derby.  It lasted a couple of hours and there was an all-you-can-eat dessert and pop bar.  We consumed enough sugar to last us to the end of the month.  Then they had so many treats left over they begged us to take some home.  Those treats didn't last 24 hours in our home.
Take a look at the video below to see Steve's car take the win (1st heat).  Although my car stayed in the derby longer than Steve's, a final race between the two of our cars at the end of the derby determined that his was the faster car of the two.
Posted by Stephen Christensen at 12:46 PM 2 comments:

Lily hasn't eaten her banana oatmeal all gone in... well, let's just say a very long time.  Well, good old St. Patrick's Day did the trick.  A few drops of food coloring into the girls oatmeal and VOILA!  Suddenly, banana oatmeal became incredibly appealing.  Both Lily and Amara were asking for more only minutes after I dished it out. 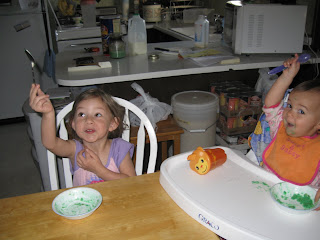 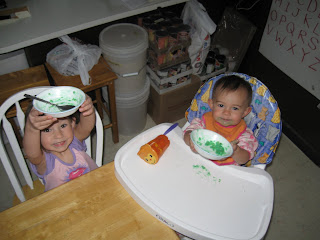 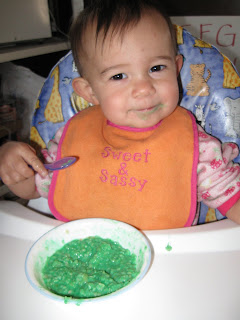 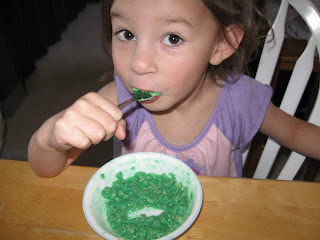 Stephen turned 32 yesterday.  His only requests were:
Every wish was granted.  He also got some phone calls from family to wish him a happy birthday (nice singing everyone!).  After pizza and cake, the girls went down for the night and he ended up having to watch an online class from last week to catch up.  Then he stayed up until midnight with a bag of popcorn watching a bunch of shows on hulu.  He was tired this morning, but I'd say he had a happy birthday.
Posted by Stephen Christensen at 8:25 AM 2 comments:

The Ability of Trees

Sun., Mar. 1, 2009
Tonight in Lily's bedtime prayer she said something so profound that I still don't know what it means.  In the middle of her prayer she stated, "and I know that trees have ability."  Then she went on praying about other things.  I thought it was cute.  Her prayer lasted awhile and when she was done I forgot to ask her what exactly it means that trees have ability.  I would like to know her answer to that.
---Update:  Mon., Mar. 2, 2009
So, this morning, I asked Lily what it meant that trees have ability. I was expecting a cute answer that didn't make much sense, but instead her answer reminded me that I have yet again underestimated Lily's ability. She's just so smart. Here's what she said: "That means they have dirt to grow in and the ability to have leaves."
Posted by Stephen Christensen at 7:58 PM 2 comments: