We are big Tommy fans and we try to FaceTime with him several times a week. 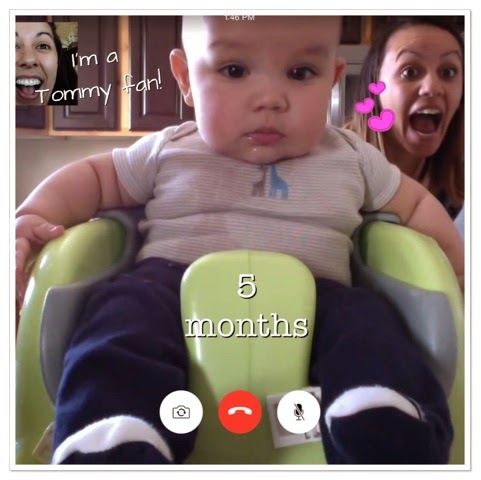 I think I see some family resemblance between him and Amara. 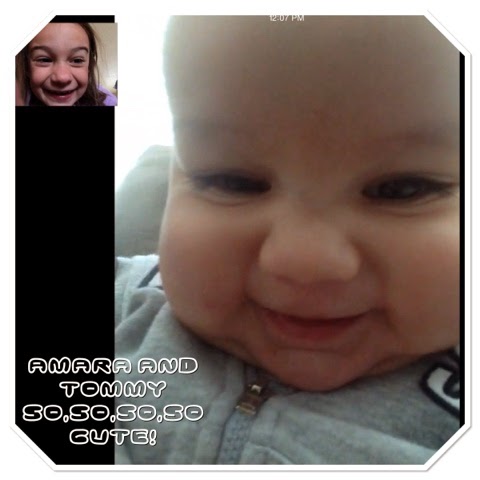 Tommy came to our house a few days ago with his mom and brother. We had fun playing with him and watching him bite his elephant toy. 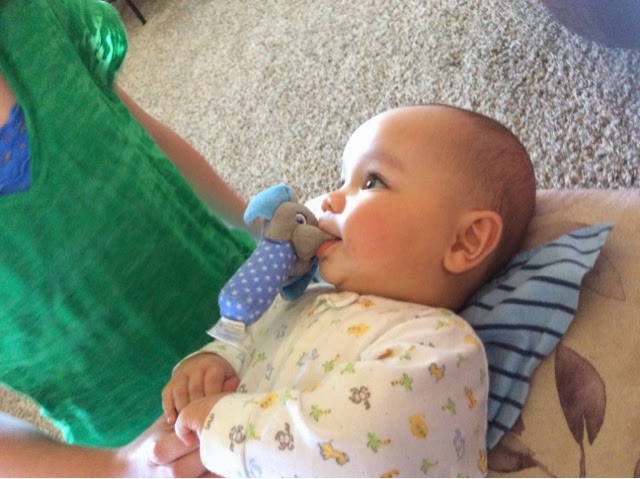 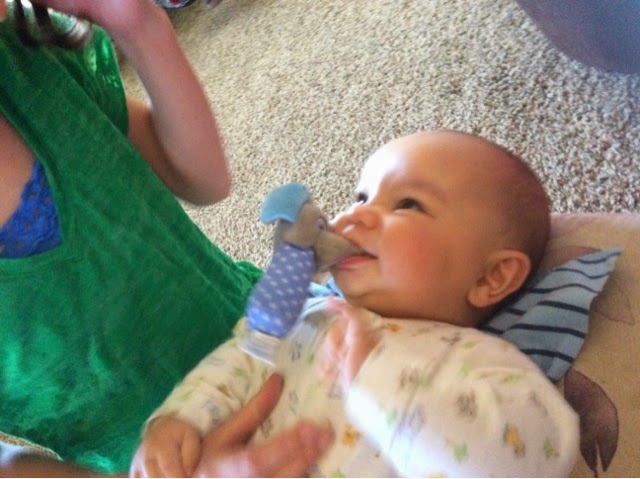 Posted by Stephen Christensen at 10:24 AM 2 comments:

We love when my mom comes over for lunch. She only has a one hour break, and it takes 10 minutes to drive to her work, so really we only get 40 minutes with her, which flies by faster than a perigrin falcon in a dive for prey. 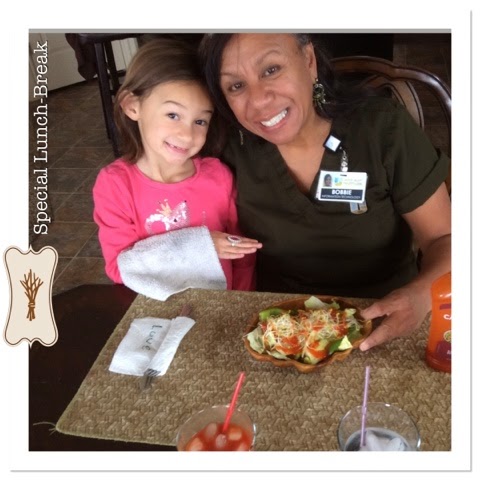 But we make the most of the time we get with her. One day, for lunch a few weeks ago, we decided to serve her a special lunch. It really was just our leftovers made to look fancier (homemade V8 to drink, beef n broccoli, fried brown rice, salad with sprouts, and cheesecake) Lily wrote the word "love" on her napkin, and Amara was her personal waitress. We filled her with all the love we could. We hope she'll be back for more soon!
Posted by Stephen Christensen at 10:03 AM 1 comment:

In our rural town of Ballard, we had a new business open, the Tractor Supply Company. At their grand opening, they had a petting zoo and free pony rides, which I found out about via a friend on Facebook. I mentioned it to my husband and my children overheard. I'm sure you can guess what my kids were begging to do. They love horses!  So away we went, and the girls had a blast. 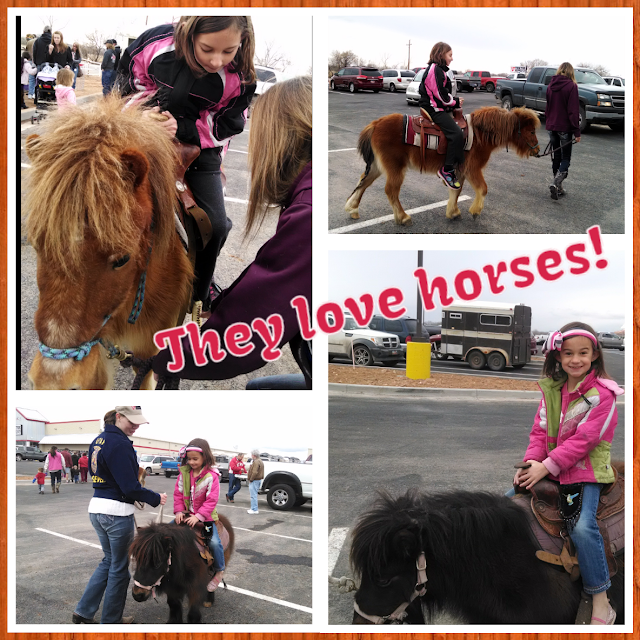 I took pictures with my phone camera of Steve, the photographer, in action. 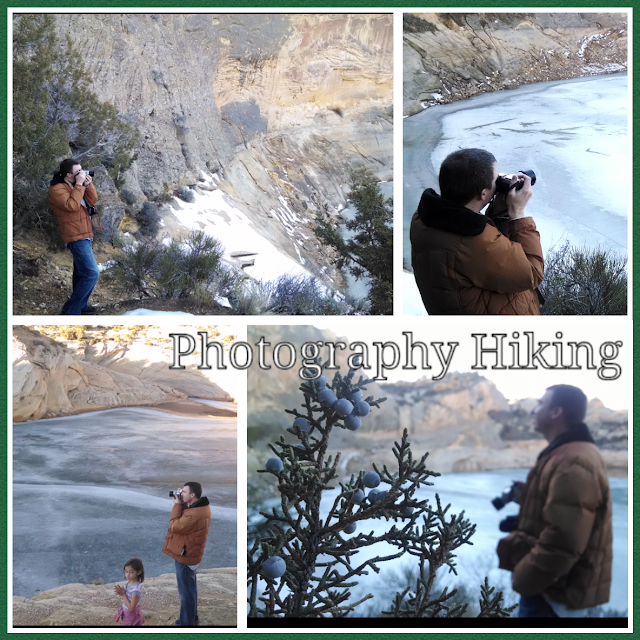 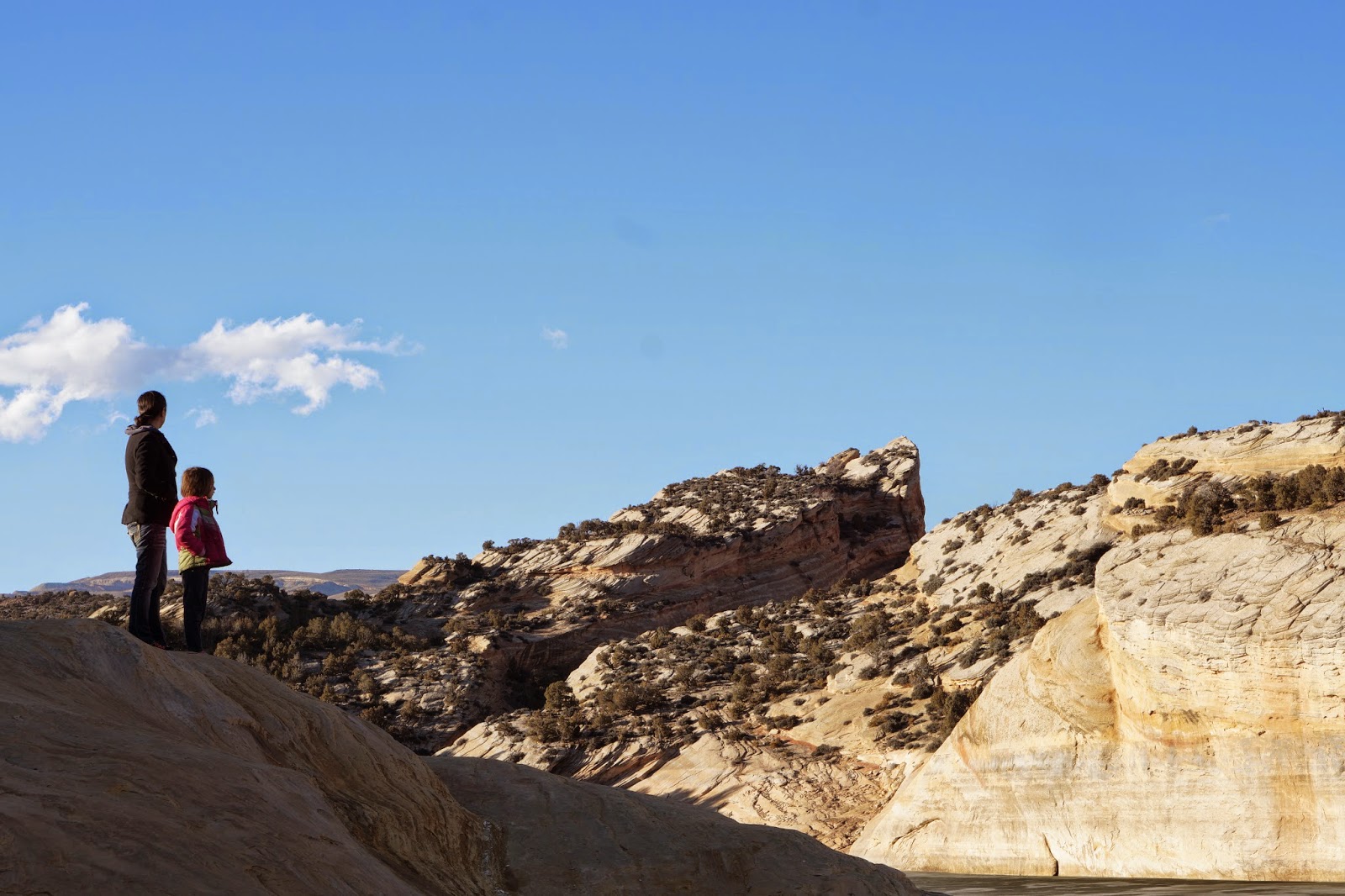 The mountains in the Uinta Basin are really fun to explore.  This past President's Day, it was so warm, we thought we would go on a hike.  This winter has been uncharacteristically warm.  My kids really didn't get much of a chance to go sledding.  I think we had 2 snow storms all winter.  We've loved the warmer weather, though.

Since Steve had school off, we thought we would go take some pictures up at Red Fleet (15 minutes past Vernal up Hwy. 191).  The reservoir was frozen, there were no noisy boats, no cars at all, no entrance fee, the skies were blue, and it was just us and nature on an absolutely gorgeous mid-February day. 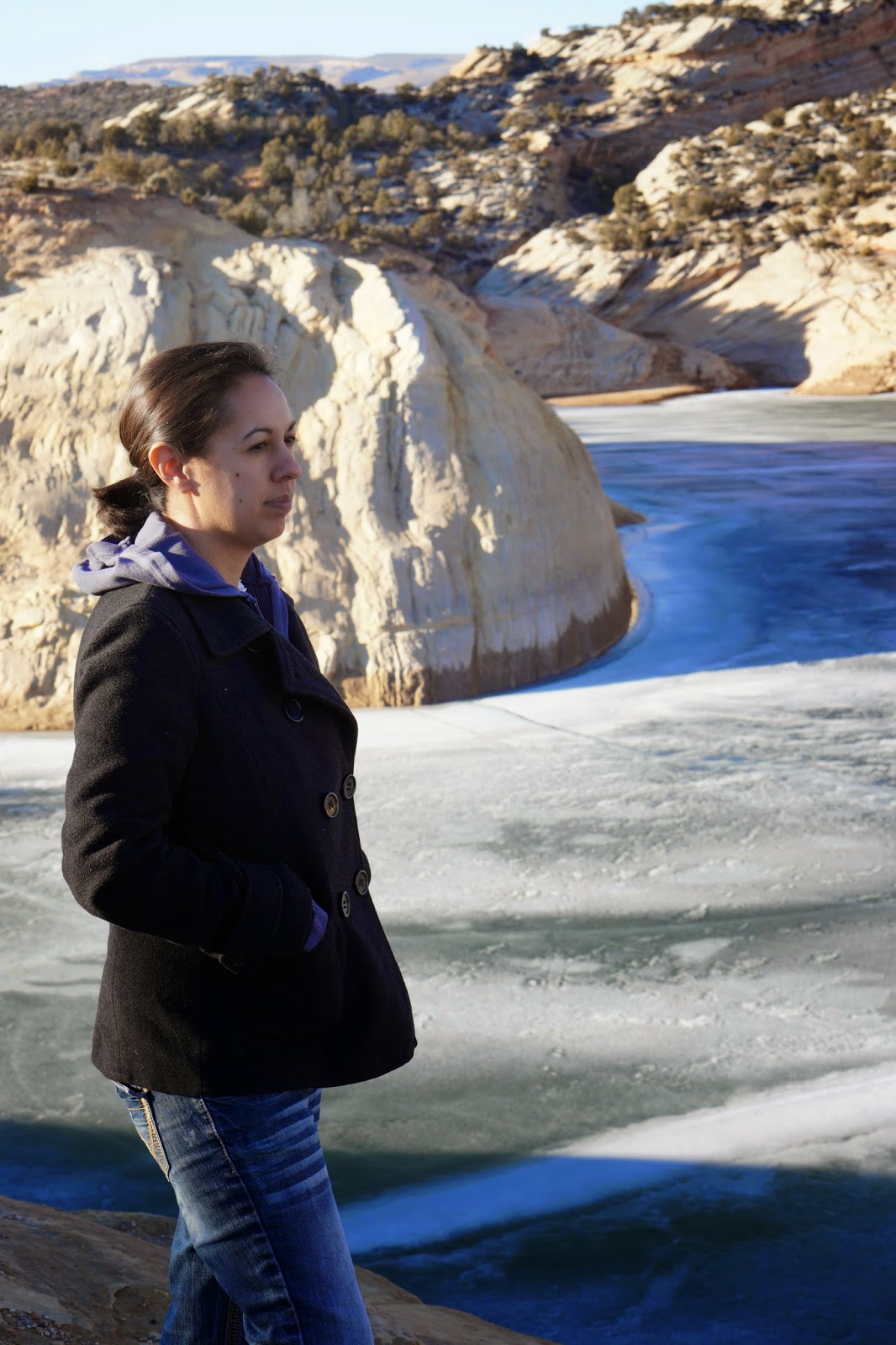 We had fun hiking around.  The girls enjoyed playing in the sand and on the rocks. 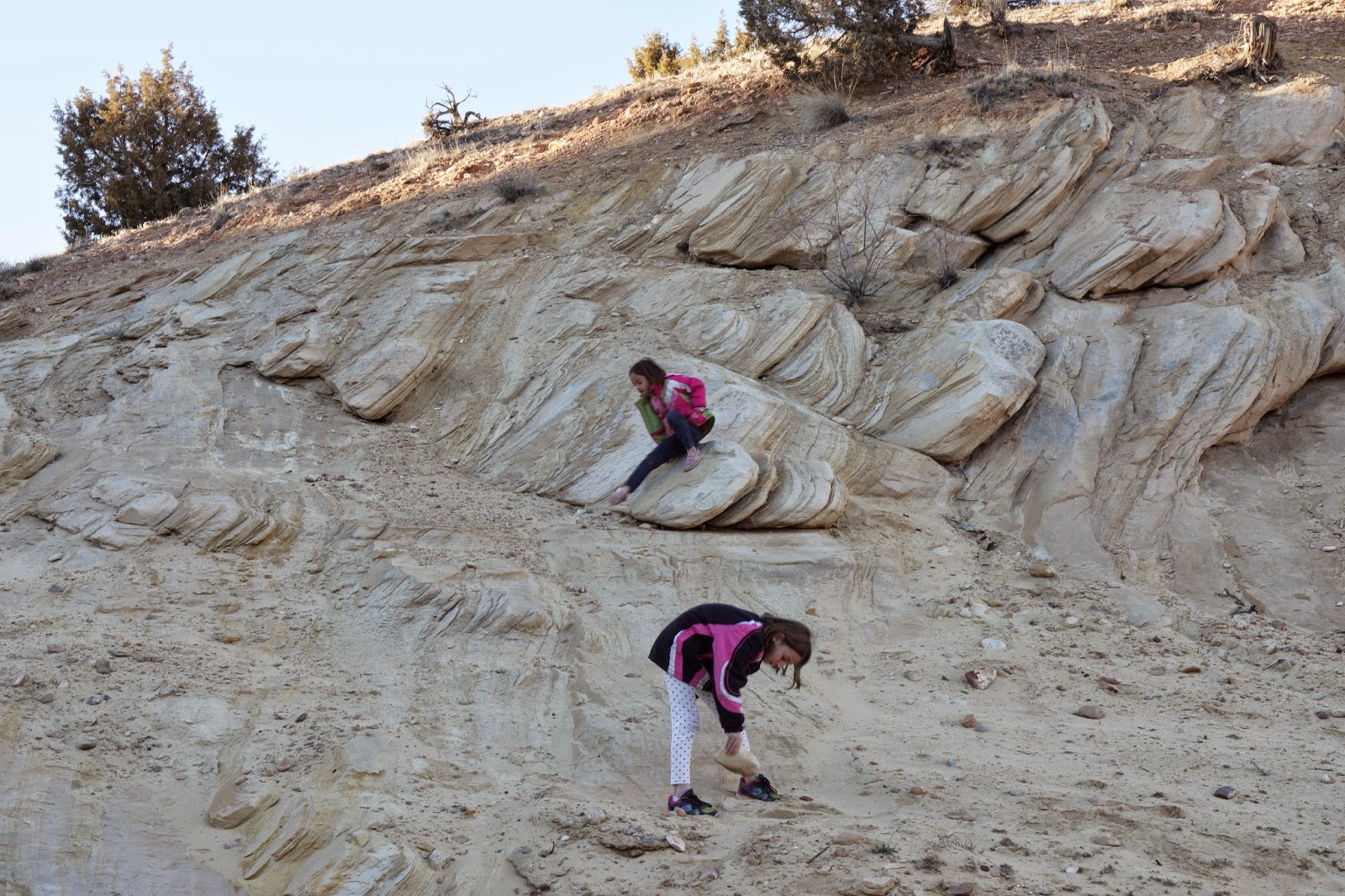 The scenery was stunning. 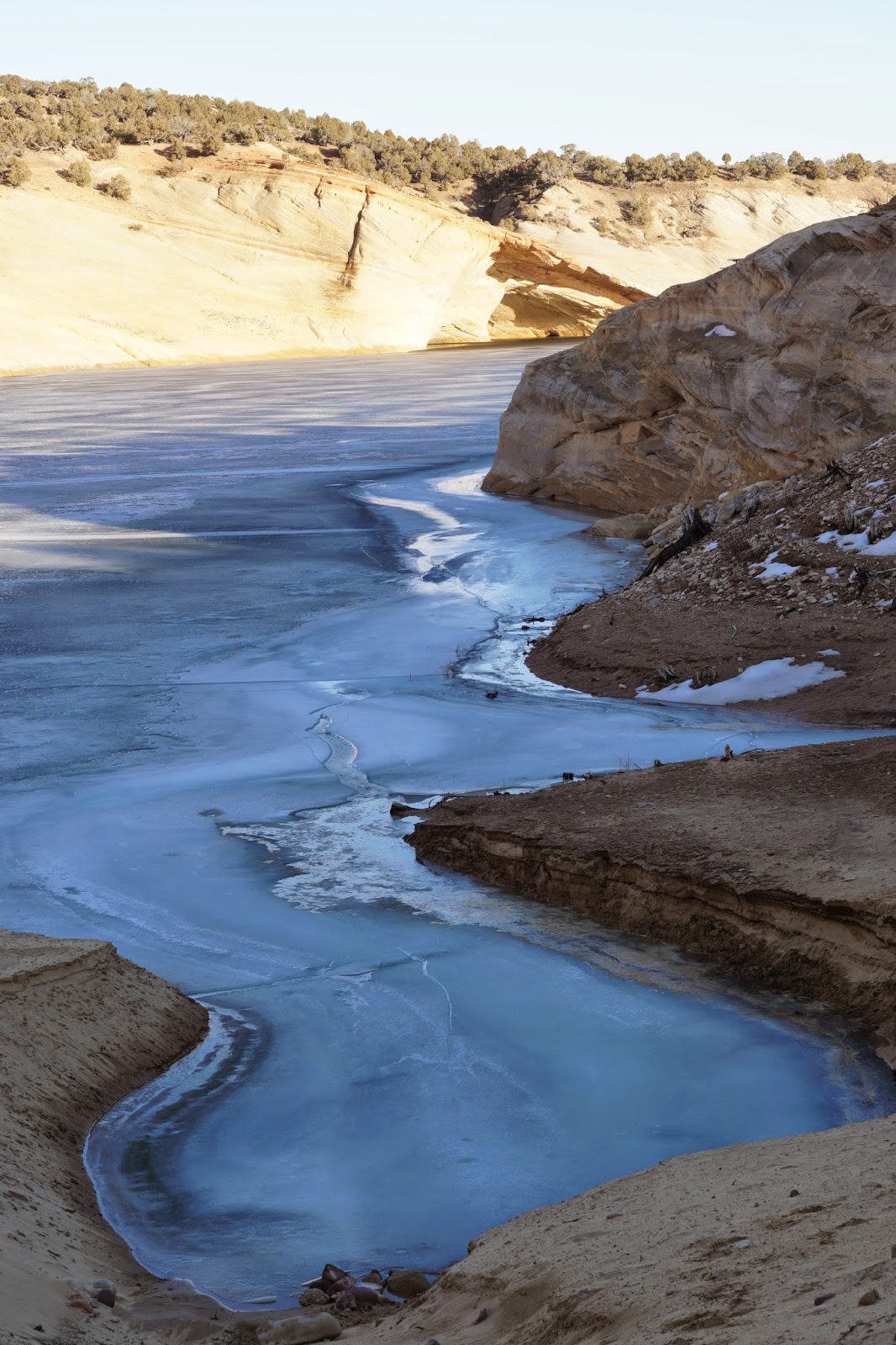 I liked this little tucked away portion of the lake where there was some ice and some water. 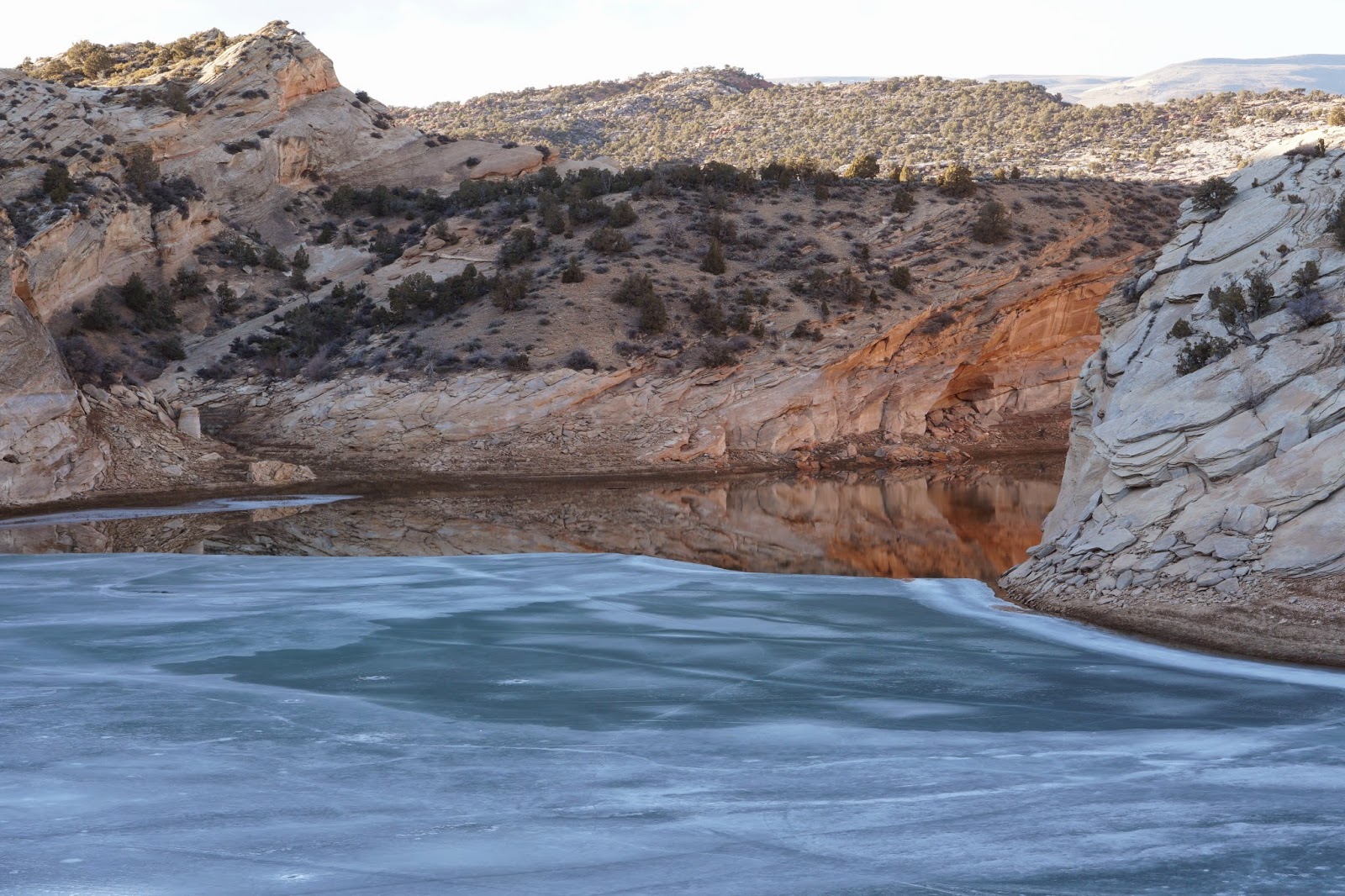 Hiking and exploring nature is by far one of our favorite family activities. 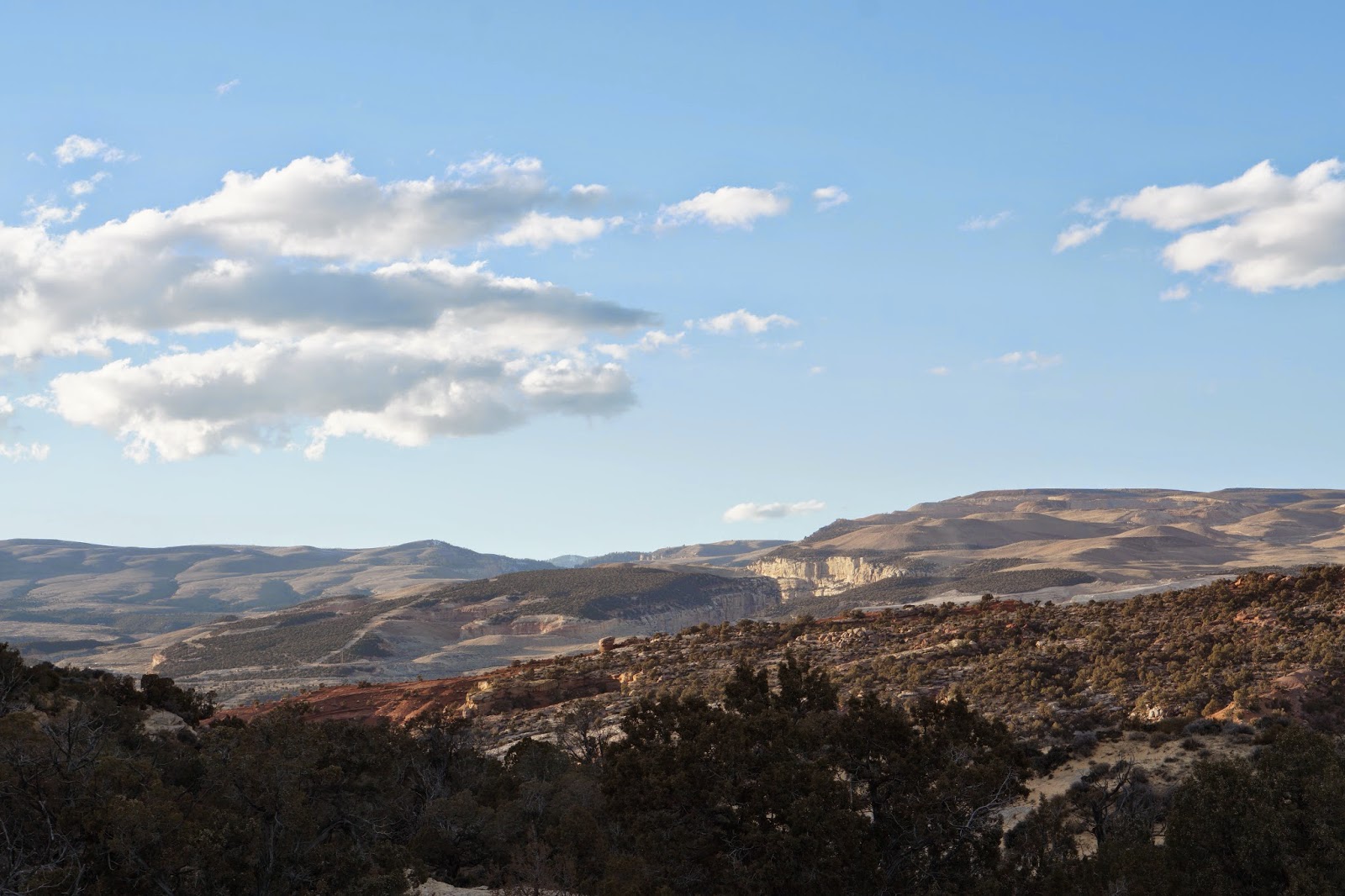 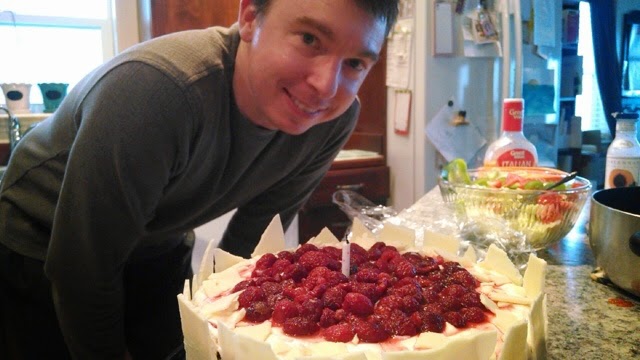 He's 38 now, but he tries to forget that because of how old it sounds. "It's too close to 40!"  He tells me. He wears it well, though, and in the scheme of things, 40 actually isn't that old. That's what I gotta keep telling myself when I think I'm getting old.
Steve likes us to keep things simple when we celebrate, so that's what we did. I made a yummy cake, and the girls and I put together a card with candy bars. 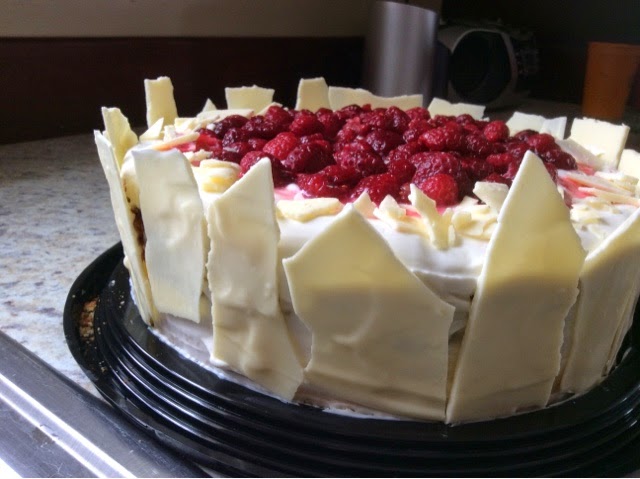 The bottom layer is cheesecake and the top layer is key lime cake. 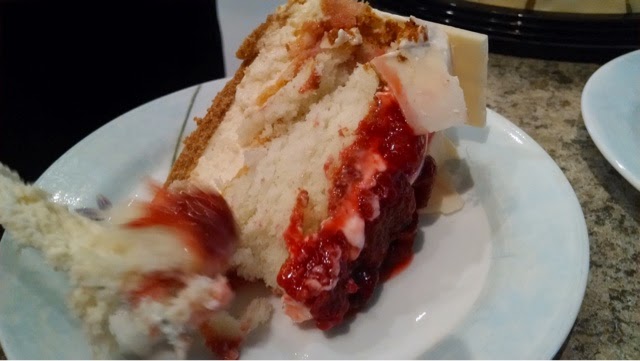 It's all covered in raspberry-cream and the top is piled with raspberries drizzled with lemon syrup. We decorated the sides and edges with white chocolate bits and planks.
His card front says "happy birthday Steve!  Your wife thinks you are so very 'dark and luscious'". The girls thought that was hilarious. I told them, "there was no candy bar that said light and luscious."  Then I explained that "dark" in this case meant handsome. 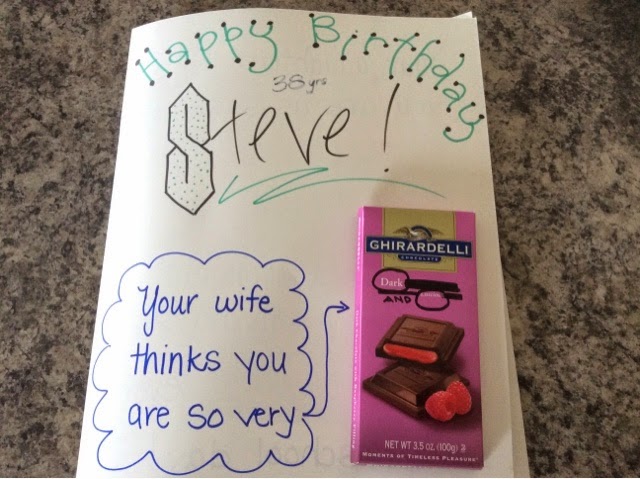 The inside says, "your daughters think you are as sweet as "buttercups"!  "You are a community hero for  solving so many "Utah scuffles" every single day" 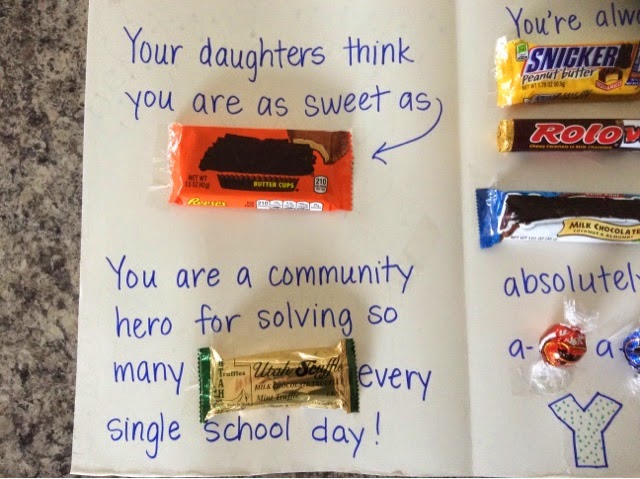 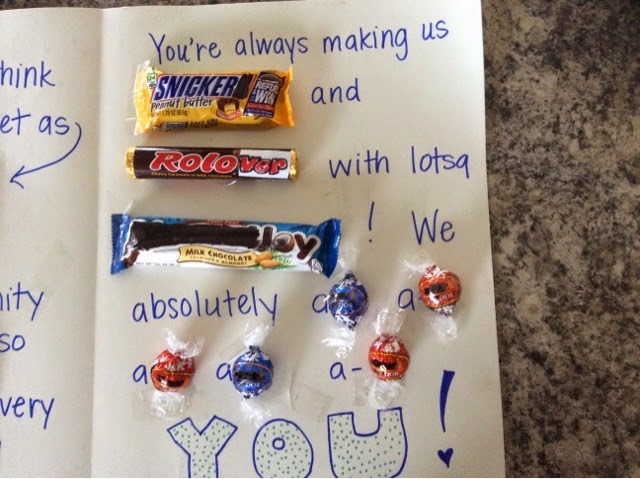 For another birthday gift, the girls, my mom, and I worked together in the early afternoon to give his (our) bedroom a makeover.  Aren't surprises fun?  I thought this one would be a good one for Steve. It was high time that we reclaim our bedroom as a sleeping place rather than a storage unit. The girls did a great job washing the windows dusting all the surfaces and wiping down things, and my mom was a huge help in cleaning and organizing as well.  We cleared the walls of the kids artwork and filled a large 3-ring binder with them. I washed all the bedding, flipped the comforter for a new design, and the room looks brand-new again.  Steve was surprised to see the room so clean and organized.  It was a fulfilling gift to give.
Later that evening, we had angel hair pasta and meatballs for dinner, one of his favorites. After dinner, Steve brought out his cake and was about to dig into it before I reminded him that we needed to sing to him first and have him blow out candles. He insisted that he only blow out one candle, so that's what just what he did. Only, he didn't blow it out. First he tried flicking it out with his fingers. He flicked and flicked and flicked, but the fire burned on. 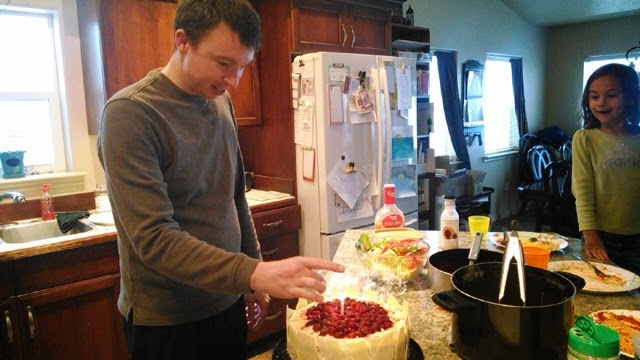 When that didn't work, he extinguished the flame with one quick swipe of his hand over the candle, and it was out. 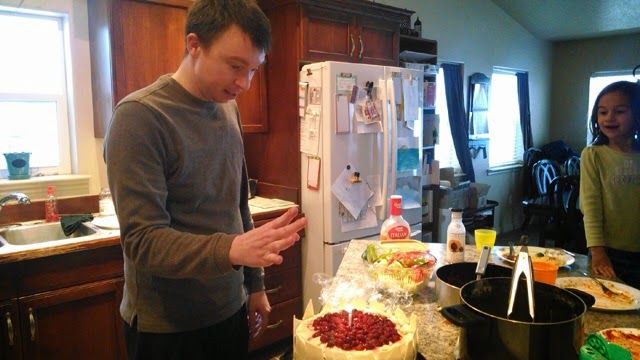 Then we relaxed and watched several episodes of Road to Avonlea while gorging on hefty pieces of birthday cake. It was a relaxing and enjoyable evening.
A couple days earlier, on the Saturday previous, we went out to eat at Pelican Cafe for his birthday. Steve ordered a burger and onion rings and was too stuffed for dessert. Later that night though, we made peanut butter bars, the kind he loved from elementary school that the lunch ladies used to make.  He's been eating and raving about how good those were for days now.
So, his birthday celebration we actually celebrated over the course of a couple days. We were pretty sure Steve would rather not go out to eat on his actual birthday because he'd be tired from all his work at school and Monday meetings. We were right, and this worked out great. Happy Birthday Steve!  We love you tons!
Posted by Stephen Christensen at 11:06 AM 2 comments: