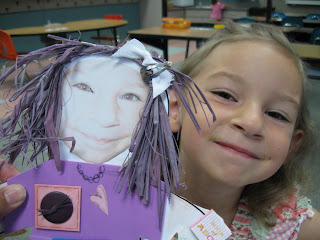 Here's a close up picture of Lily's first homework assignment (due her first day of school).  She was to cut out the cardstock gingerbread-shaped person and then decorate it to look like herself (with the help of a parent) using things around the house.  She loves the color purple, if you can't tell.  She made the clothes out of foam sheets and cut it out herself.  I helped her staple the purple raffia hair to the paper.  Then she decorated with stickers I had. 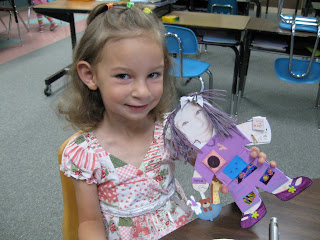 Lily loves her teacher.  She really is a very sought-after teacher, requested by almost everyone who has a kindergartener.  We're so happy Lily got her! 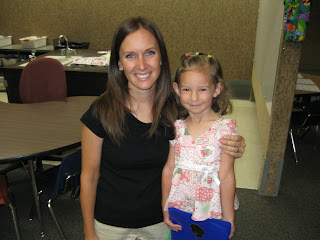 We had Lily's first parent-teacher-student conference a while back and she tells me Lily is far ahead of any of her students (It's not surprising to me.  She was the one that was initiating her reading lesson everyday so she could learn to read when she was 4.).  Lily is enjoying all the fun things she's been able to do in Kindergarten like field trips, art time, library time, P.E., and playing on the playground.  I've started volunteering in her classroom once a week for an hour, and it's fun to see her at school and meet her classmates as well.

So, I know I'm two and a half months late with this post, but better late than never.
Posted by Stephen Christensen at 8:42 PM No comments:

Our Autumn Adventures and Halloween 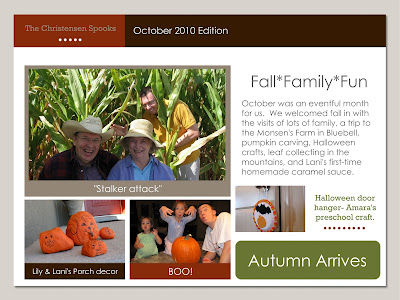 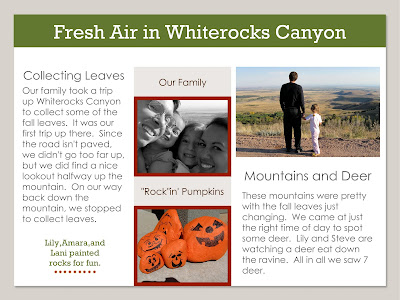 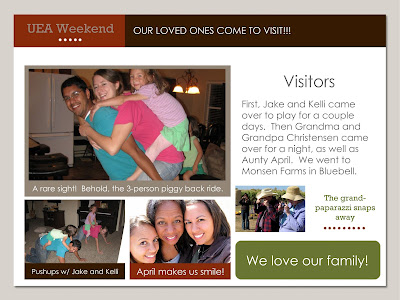 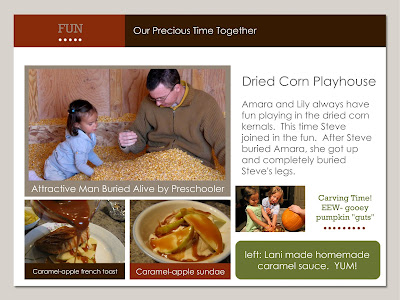 Halloween  has recently past, and this year we went to spend the creepy day with some of our favorite spooks.  We stayed with Steve's parents and enjoyed seeing them as well as his brother, Matt and his sisters Bev and Laurel and their families.  Lily and Amara had some good times with their cousins, grandparents, and Aunts and Uncles.  On Halloween, Steve and I got to go to the Desert Star Theater with my family to watch "Welcome Back Potter," a comical play about Harry Potter's 10 year high school reunion.  We all had a great time!  Unfortunately, I forgot my camera at home, so I don't have pictures of Halloween.


Later that night, Lily, Amara, and I got dressed up to go trick-or-treating.  Lily was a bumble bee, Amara was a ladybug, and I was a snow princess.  We brought Tamsin with us to Aunty April's neighborhood to trick-or-treat.  It was lightly drizzling rain the entire time, but it didn't get the girls spirits down.  In fact, Amara had the greatest endurance of the 3 trick-or-treaters, staying out a half hour longer than the rest (thanks April for taking her around).  The girls came away with plenty of sweets.  As the night got later, our little girls decided they wanted to see if the Candy Fairy would come, so they put their bags of candy on the dining table and sure enough, the next morning their candy was gone and there were 2 toys for each of them.  Candy fairy was a huge success, and the girls don't miss their candy, and they love their new toys.

Steve and I went to Micah's house after the girls went to sleep (thanks to Steve's parents for babysitting our sleeping children), and we had tasty homemade doughnuts shaped like ghosts, and played a rousing game of Cranium with Dad, Debby, Micah, Mandy, April, Spencer, Missy, and Mandy's mom, dad, and brother.  Our dream team (Steve, me and my dad) led the game the entire time up until the end, then the slow and steady "Oldies but Goodies" (Mandy's parents and Debby) pulled through the finish line first.  Wish I had more pictures.  Boo hoo hoo!