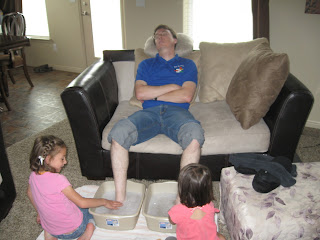 A couple weeks ago, Steve had a campout with the scouts from Friday to Saturday night.  I know how camping can really take a toll on your energy, so I was fully expecting Steve to be on the couch much of Saturday, which he was.  Well, while Steve was out braving the wilderness on Friday night, my mom came over and joined me and the girls for a "girls night."  They gave me a foot massage using a scrub my mom had brought over.  May I just say, Amara and Lily have tiny hands and their massages were cute.  So, the next day, when Steve came home, he showered and sat on the couch, his eyelids already half-closed when the girls came up with the great idea to give daddy a pedicure.  I think it helped proposing the idea when he was half-out because he was willing to surrender.  So, I helped gather the items and I helped with some of the massaging too.  Here's how it went:
Step One: Use the handy wooden scoop to gob out a bunch scrub.
Step Two: Spread onto wet foot.
Step Three: Massage like you mean it!
Step Four: Repeat on other foot.
Steve was a little ticklish with the girls massaging, and I loved watching him squirm as they were trying to push harder.  I'm glad I got pictures! 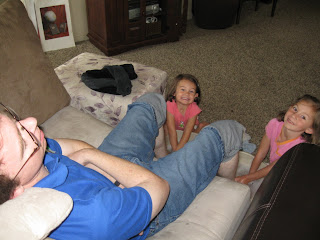 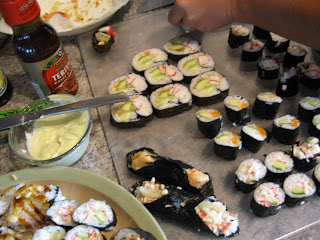 A couple of weeks ago we had a delicious sushi night.  While I was making the sushi with my mom, Lily was snapping some pictures.  She did a good job of capturing the food we ate and just browsing through them makes my mouth water!  The Smilebox presentation at the end of this post features her photos.

We made Christensen-Family-Friendly rolls.  In other words, all our sushi rolls were raw-fish-less.  We are greatly limited in our fresh fish selection here in rural-ville, but I'm not complaining, at least not today.  The way I see it, I'm lucky that I can make tasty sushi minus the sashimi, and at the same time I get to save money for my family!  My mom and I made a variety of rolls mixing-and-matching these ingredients~
Everyone loved dinner and we ate until there were only 3 small pieces left.


Posted by Stephen Christensen at 10:04 AM No comments:

The alarm goes off at 6:45 a.m. and Lily is dressed, her hair brushed and ready for breakfast in 3 minutes time.  I'm thinking~ Huh.  That's unusual.  Last school year it took her 30-45 minutes to just put her clothes on.  Then I would scramble to do her hair while she glared and poked at her breakfast, then we'd grab her shoes and backpack on our way out the door and I'd wrap her toast in a paper towel for her to eat in the car on the way to school. 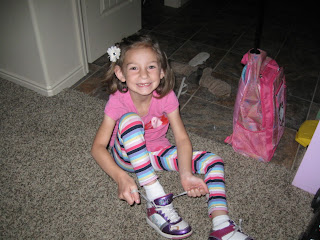 So what's with the remarkable enthusiasm?  It's the magic of a new school year.  It kicks us into gear- and by "us" I mean all of us.  After our joyous summer devoid of alarm clocks, routines, schedules, and deadlines, school comes knocking at our door and we're back in business.  And yes, we were out the door in no time on the first day of school. 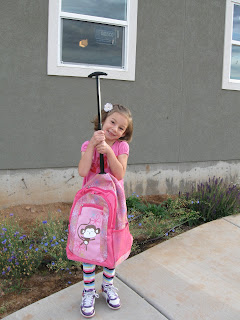 Now it's been 3 weeks since school began and morning routines are a bit of a drudgery again.  But that's what I expected.

Lily unmistakably has a rough time rolling out of bed, but she loves school.  She tells me that she has a very nice and beautiful teacher, Mrs. Brinkerhoff. 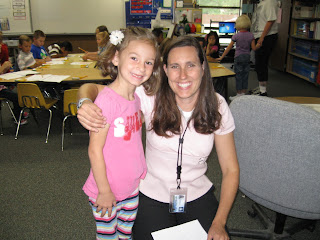 She likes everything about school except disrespectful students who talk out of turn.  I can understand that.  She's also made some friends and has a great time at recess playing.

Me: What do you play?
Lily:  We play the same thing every recess.
Me: And what's that?
Lily: Oh, just like we're dogs.

That doesn't surprise me.  She's wanted a dog since forever ago.  Her favorite shows are Martha Speaks (on PBS, a cartoon about a talking dog) and Dogs With Jobs (BYU-TV).  And any gift-giving holiday she makes it known that she wants a puppy.

One day I drove by the school at recess time and saw Lily holding her friend's hand and running around the playground.  It makes my heart happy for her, especially since I've been tragically weighed down with her being gone from home (me) for such a long part of the day.  Amara at first would ask if Lily was coming home soon or if we were going to run an errand, she'd ask if we were going to get Lily, but now she realizes that Lily goes early to school with dad and comes home with him close to dinner time.

We all wake up early and get ready for the day at the same time, so sometimes Amara and I will go to the school early and help Steve in his classroom and walk Lily to class. 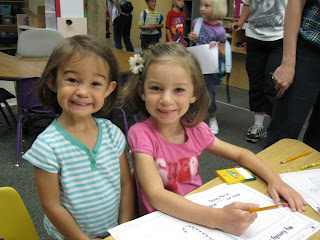 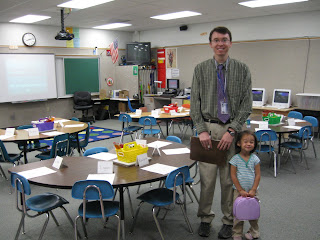 Steve's classroom has changed since last year.  He's switched to tables instead of desks.  In the picture above you see the U-shaped tables- it's all he could get at the time.  Now, he has rectangular tables and his classroom looks more spacious.  Steve's report on how the school year is going thus far is *deep breath* "It going... [insert 30 second pause]... fine."

I've always loved Lily's drawings and she's come home with some great ones.  I'll share one of her worksheets with you, so you can enjoy her artwork as much as I do. 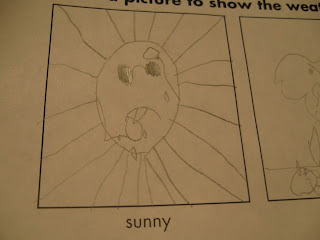 Yes, that's the sun with sunglasses on and wiping sweat from his face!  Nice tongue hanging out, too. 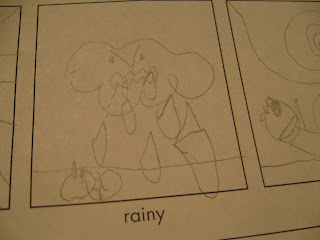 I like how mad the storm cloud looks.  The rain is bigger at the bottom because it's closer to you.  She likes to add perspective to her drawings. 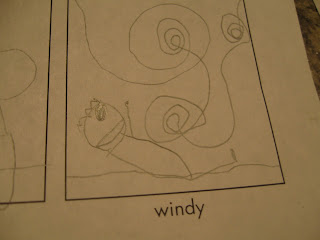 This is a guy getting knocked over by the wind. 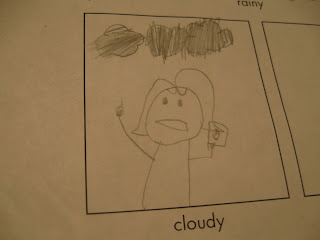 She's pointing to the clouds. 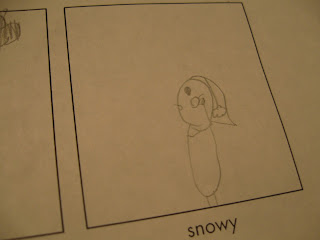 This picture is mostly white, just like a whiteout snowstorm. 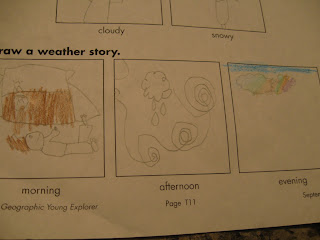 Then her drawings of morning, afternoon, and evening.  I particularly like how groggy the little person is lying on the floor in the morning drawing.  It is an accurate depiction of her normal mornings.  You notice the afternoon is raining, that's because summers in Utah get afternoon clouds and thundershowers.  Then the evening has colorful clouds for the sunset. 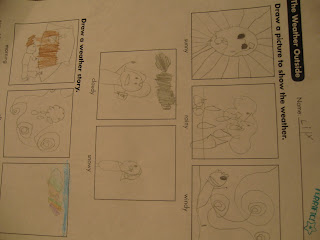