It's Saturday and the sun never came out, so the girls stayed in pajamas all day. 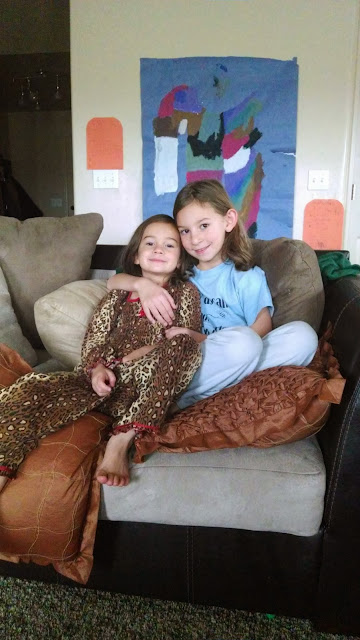 Posted by Stephen Christensen at 7:00 PM No comments:

Amara said she would like to participate in the city's Jr. Jazz league, so on a whim, I paid the $30 and signed her up.  She's never played basketball.  Never ever.  So, I really hoped she would have a fun time with it.  The teams are coed and when we got her team's roster I found out she was the only girl on her team.  I was feeling a little anxious for her and the season hadn't even begun.  I hoped the boys would pass to her.  I hoped she wouldn't hate it.

Well, she's had a couple games and it turns out that she loves it.  Whew! 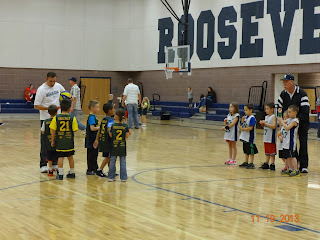 The first time she played I discovered that the kids hardly ever pass.  There are very few "rules" for their league (thank goodness).  Kids can travel, double dribble, and there are no fouls or free throws.  There is a 10 minute practice at the beginning of each game and the game is two 15-minute halves.  They are encouraged the whole game by their coach that spends his time on the court with his team directing them and refereeing.  It's so fun (and sometimes funny to watch- Steve especially laughs when a kid passes the ball to another teammate that is literally 3 feet away by passing it directly into the other teammate's face, which has happened every game so far). 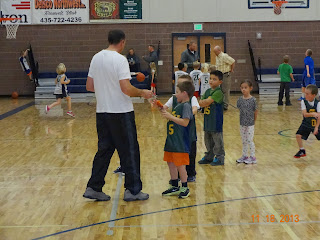 The coach is a good coach.  He encourages his team to "Pass to Amara!"  And he'll even catch the ball and give it to Amara so she can go try to make a basket.  The first game Amara felt pretty confused and she definitely looked lost out there, as she would follow around the person she was supposed to be guarding like a puppy and it's mother.  It was okay though because the other kid was just as lost following the crowd.  We kept shouting from the sidelines for Amara to watch the ball (for fear she may get face-passed to while not watching).  We are happy that she's having a good experience and she enjoys going out there- plus she's figuring things out and improving in only 2 games time.  You should've seen her guard her guy this last game.  When he was trying to make his shot, she jumped up and down with her arms up and moving- and she was between him and the basket.  Improvement!  Even more awesome than that was after the game when she came up to us and said, "Did you see me guarding that guy?  My hands were up and I did a really good job!"  She was so proud of herself and it made me happy to see her having so much fun. 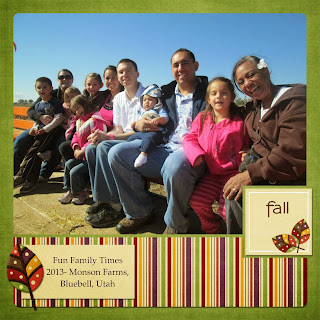 This past October, Joe, Missy, Malia, JJ, Maizie, and Jayden came for a visit.  I have so many great memories of their stay with us!  We visited Monson Farms in Bluebell one day and did nearly every activity there was to do.  It was a perfect day to spend with family! 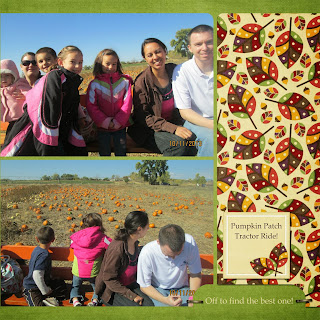 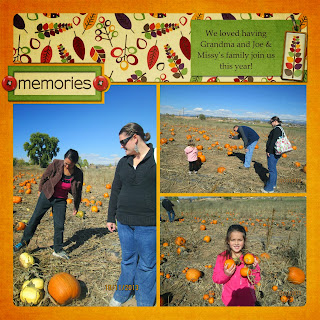 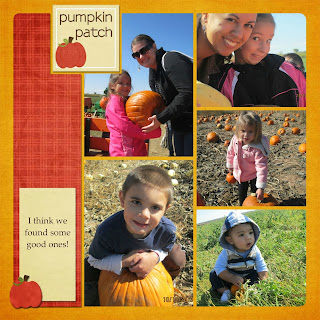 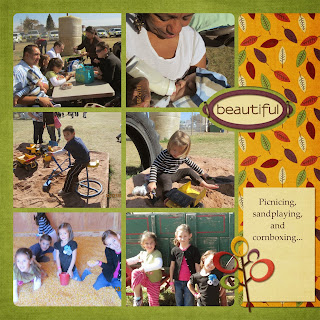 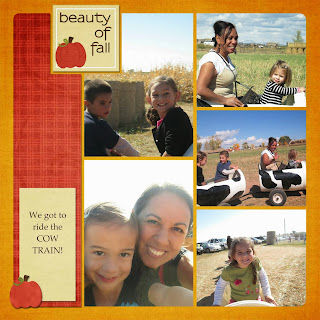 Every time Joe is here I get the hankering to get the grill going.  Kalbi was on the menu and it did NOT disappoint!!! 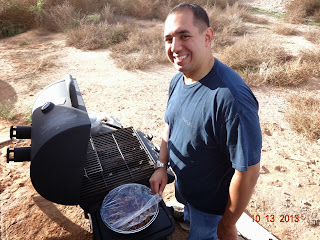 We loved seeing and spending time with everyone.  Come again soon! 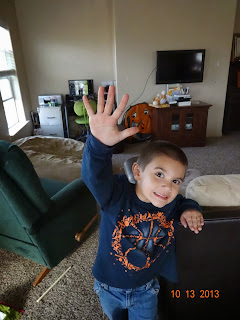 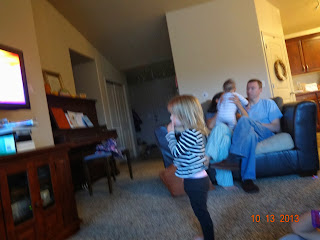 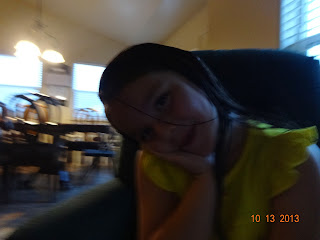 A Visit From Steve's Parents

We always love having people journey to the faraway land of Ballard to visit us, especially our families!  In October, we had a visit from Steve's parents.  We enjoyed spending time with them.  My favorite thing we did while they were here was go on a walk down our street.  It was a short walk, a perfect walk in lovely weather, and we took our time, stopping to look around us and enjoy nature a bit.  There was a whole bunch of butterflies in a field near us, and it was fun to watch them for a time.

Lily snapped these 2 pictures when they were on their way back home and I'm glad she thought to do that because I hadn't taken any other photos. 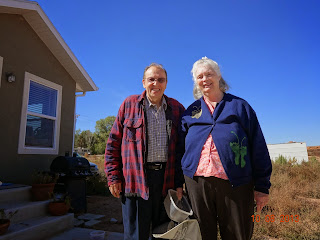 Posted by Stephen Christensen at 11:54 AM No comments: 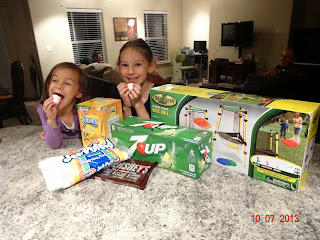 Our city sponsored a family fun night and they had a BBQ and games and a raffle for prizes.  Well, our little Lily just happens to be a lucky girl and she won the raffle for the disc golf set, pack of 7-up, graham crackers, marshmallows, and hershey's bars.  Yay for Lily!  And yay for us! 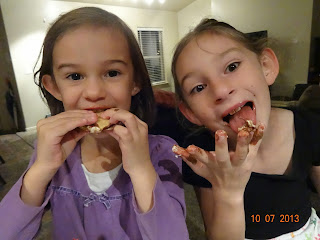 Posted by Stephen Christensen at 12:14 PM No comments: 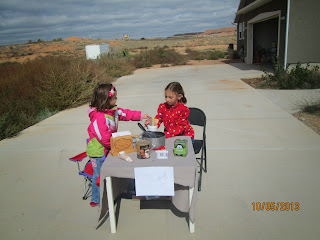 Lily asked if she could sell hot chocolate one afternoon, and it happened to be a good time, so I agreed.  I remembered selling things with my brothers or my friends to other neighborhood kids when I was a little girl and I think every kid should have that opportunity.  So, I boiled some water and helped Lily set up shop.  She made the sign and set the price for 50 cents. 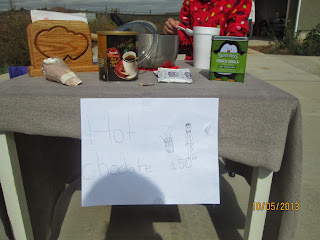 I did tell her not to expect many visitors because we don't exactly have many neighbor kids to sell to.  And sure enough, no neighborhood kids showed up.  But that doesn't mean they didn't make a sell.  Grandma came over and bought their first cup of chocolate (actually she chose the last packet of apple cider) for $10- keep the change.  The girls were thrilled.

Amara dumped in the packet. 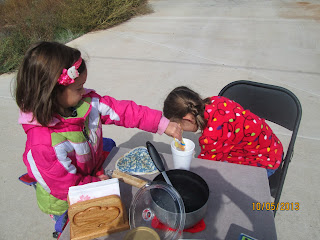 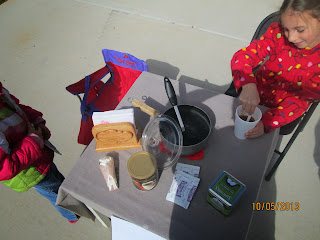 And grandma got her warm cup of apple cider. 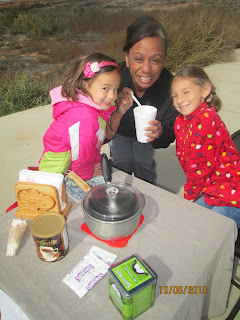 Steve came out a little later and paid 50 cents for some hot chocolate.

The girls sat out there for a couple more hours until it started getting dark (sometimes manning their station and other times playing with the neighbor's kitties).  Amara's job was to smile and wave at all the cars and trucks passing by.

Just as I came out to help put things away for the night I saw a black pickup truck parked in front of the girl's table and he was handing them 50 cents for a cup of chocolate.  I was so touched that some stranger would take the time to stop for them.  They were thrilled again.

After he drove off, I took the hot water in the house, and I came out to get more things when another truck pulled over and asked the girls for some hot chocolate.  It was our new neighbor 2 doors down and his brother-in-law.  I told them that I'd go get the hot water- and I rushed in the house to get it.  He paid the girls all the change he had- $7.50.  They gave him 4 cups of chocolate, since that's all the water we had left.

What a hauling for a few cups of cocoa!  Lucky girls.  Business doesn't always go that good, but for them that day, it did.  Thanks to everyone who stopped by.  It made 2 sweet girls very happy.
Posted by Stephen Christensen at 5:04 PM 3 comments:

How We Watch General Conference 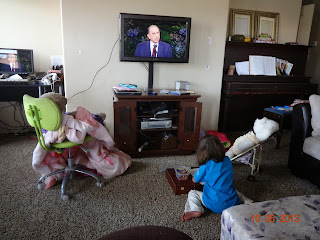 Wanna see how we watched this past General Conference?
My favorite is that Amara set up her stuffed animals so they had a good view to watch the prophet speak.

What it looks like:
The TV is plugged into the computer which is streaming conference via lds.org.  Amara set up directly in front of the TV with her own little desk area complete with crayons and a sturdy hard surface where she could work on her conference packet which she got from primary.  Lily was at the table with hers.  I'm on the couch with my notebook and Steve took the recliner for his domain.


The girls got 10 and a half pounds of candy total.  That's a lot of poisen for growing minds and teeth!  This morning they woke up and the candy fairy had swapped their candy for books and stickers.  Thanks Candy Fairy!

Posted by Stephen Christensen at 1:41 PM No comments: