Some Highlights from the Christensen Reunion (July 23-28)

Each team got points for:
(1) Being on time
(1) Involving everyone
(1) Plating
(3) Presentation (entertaining, introduced their team, introduce the food.)
(1) Include a food storage item
(3) Taste

There were also bonus points issued to those teams who were able to complete their team's secret mission.  Looking back, the points on that got way out of balance, so if I were to do that again, I'd find a way to make it a bit more fair across the board.  The secret missions were fun for me to see happening, though.  The pioneers had to serve others and keep a record of it.  The sherriffs had to catch the outlaws stealing.  The outlaws had to steal ingredients.  The Natives had to teach facts to others.


The Layout and Showdowns:

There were some tables set up for work spaces, the oven and stove top were shared by all teams.  The Natives, however, chose to cook their meal outside over a fire! (Tron had a portable gas burner). Gotta love that!  I designated the space between the tables as "Main Street" so that we would have a good place to do our periodic "Showdowns" with marshmallow blow-guns.  The stairs became the hospital where those who got shot at the showdown or got a bad roll of the dysentery dice had to sit out and couldn't help their team for 2 minutes. 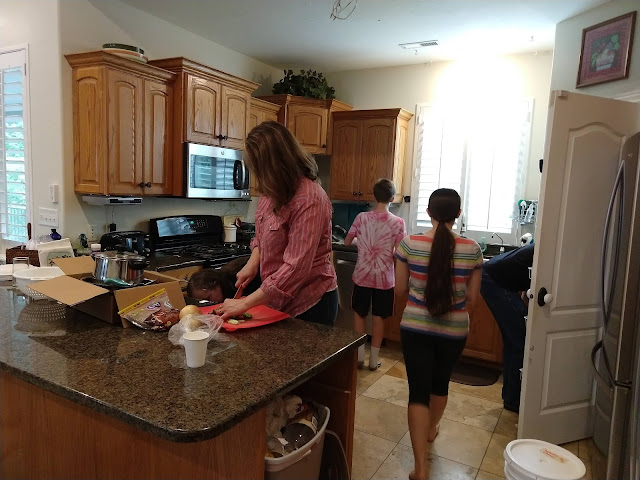 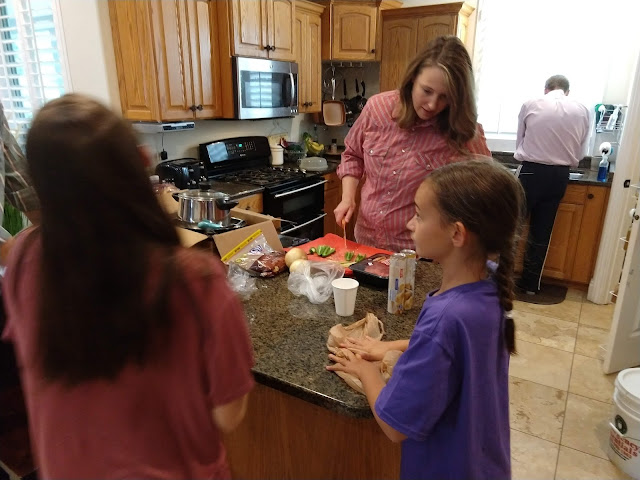 We headed across the street to the park for a quick family picture with as many as we could gather.  Steve grabbed his camera, took the big picture and then got some fun action shots with those who were willing. 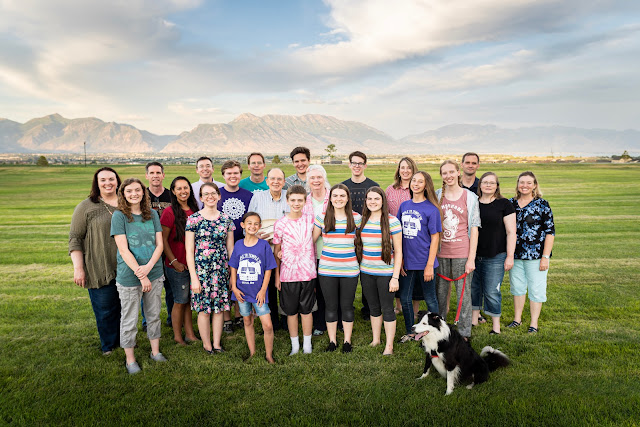 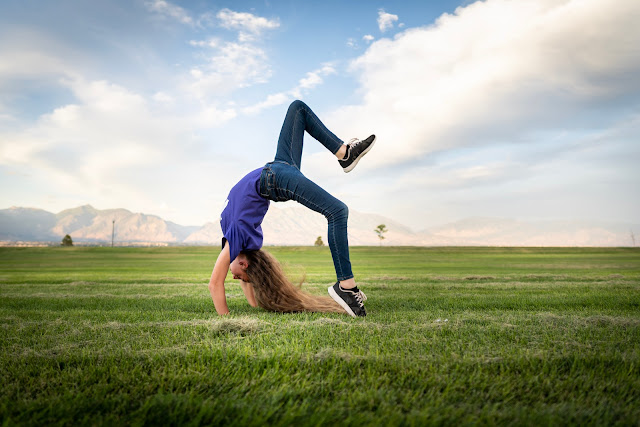 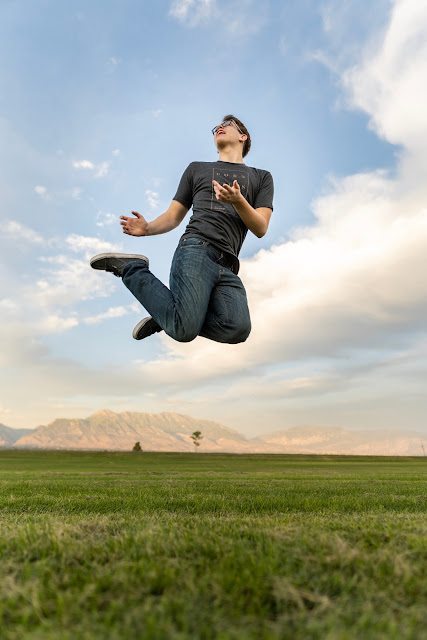 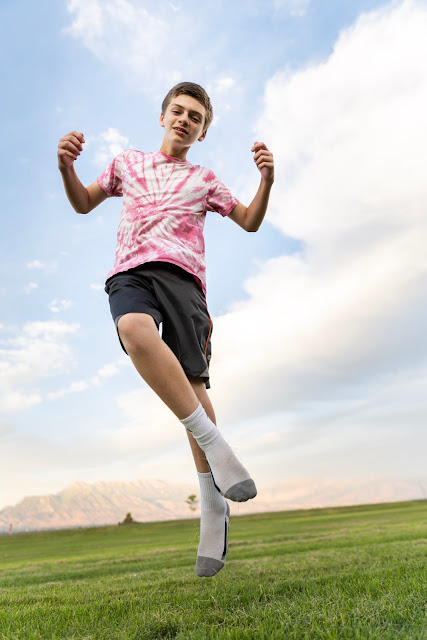 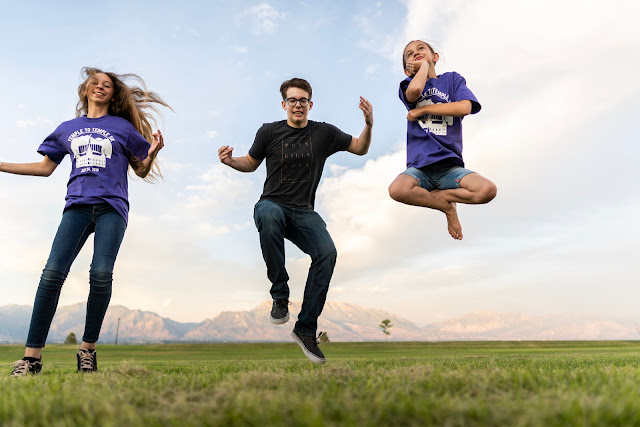 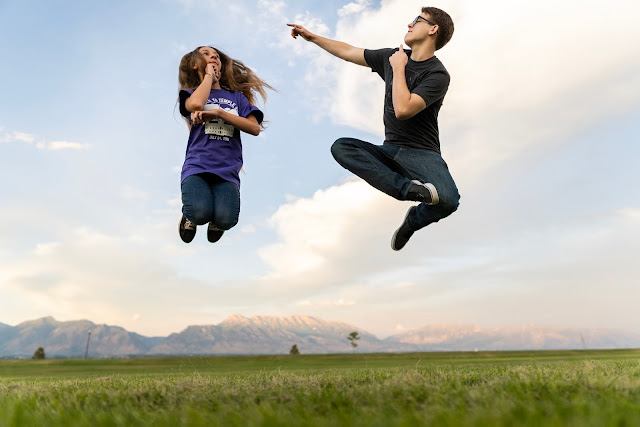 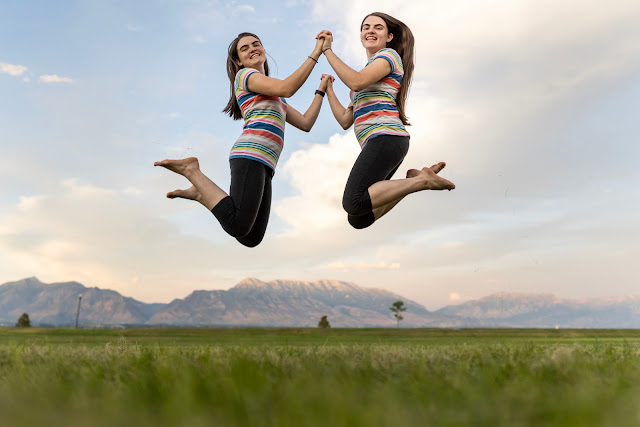 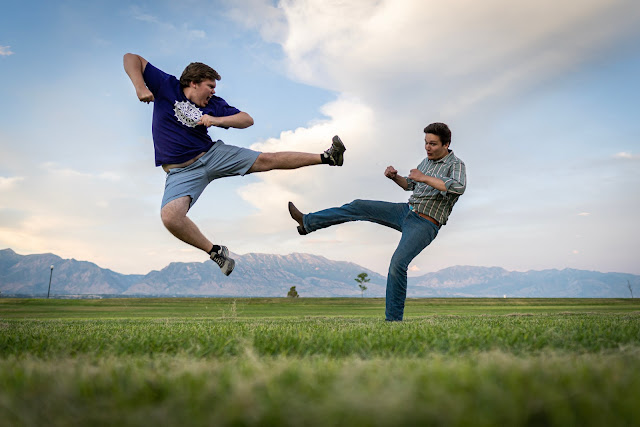 A Day At Highland Glen

We spent all day at Highland Glen.  Amara and Lily loved being out on the lake with the water trampoline or on the kayaks.  I enjoyed watching them play volleyball with their cousins.  For lunch we had build-your-own salad/sandwich bar w/ chips and desserts.  Then dinner we had lots of pizzas.

Something interesting happened.  A teenage boy came over and was driving his expensive remote-controlled truck right next to our pavillion, kicking up a bunch of dirt. Laurel went and asked him to stop because it was causing lots of dust to get in the food and it's bad for those with asthma.  That kid said, "No" and that it wasn't causing a problem and he made all these excuses why he couldn't drive the truck elsewhere.  So, Laurel came back and the teen kept doing it.  So, Laurel took his stuff that he was charging at our rented pavillion and gave it to him telling him he could not use our pavillion if he wasn't going to stop kicking up dirt.  He gave more excuses, kicked up a little more dirt and left.  He came back about an hour later with some friends.  They strapped on a blue smoke firework to the remote truck. lit it, and it spewed loads of blue smoke everywhere.  Then they drove it all the way up to our pavillion and made circles around it and by us who were laying in the grass nearby.  Then they chased a mama duck and her babies with it.  They were being jerks!  A couple minutes went by and I hear this loud explosion and there they are, next to the water, exploding M-80 firecrackers in it.  There were families on the shore, kids in the water, and ducks all around.  Can you believe their gall?  A man yelled over to them that he would call the cops if they did that again.  The kid yelled back, "What could it kill?  A fish?"  He and his cronies started laughing.  Anyway, they got the message and left.  It wouldn't surprise me if they and the cops were on a first name basis already.


After a full and fun day at Highland Glen, it was good to go shower and hang out together back at home.

We were up early to go hiking to Cecret Lake above Alta. 'Twas gorgeous and the cloudy skies only added to the comfort level.  it did rain and we didn't get to see all the wildflower fields, but it was still beautiful!  I love the mountains and the wildflowers. 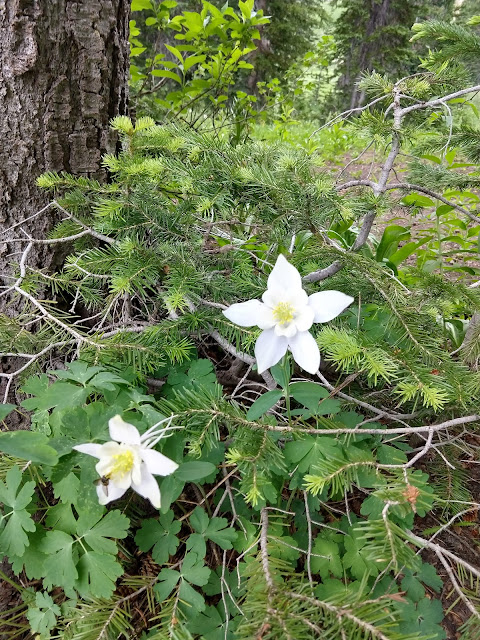 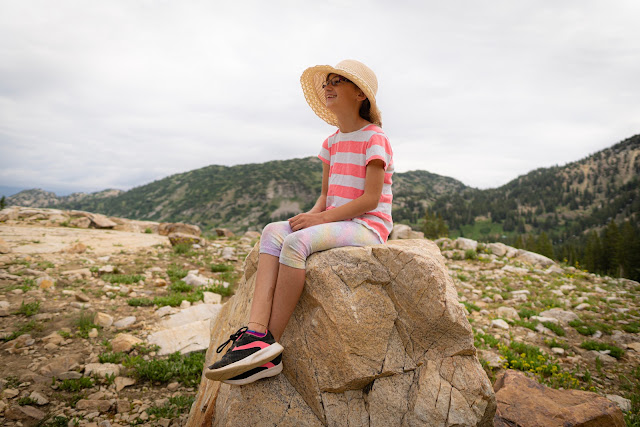 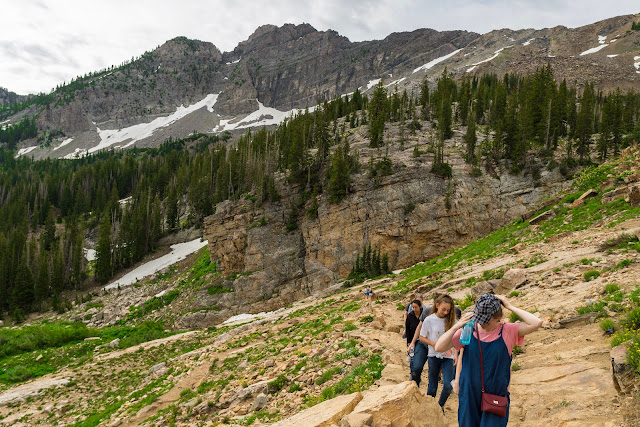 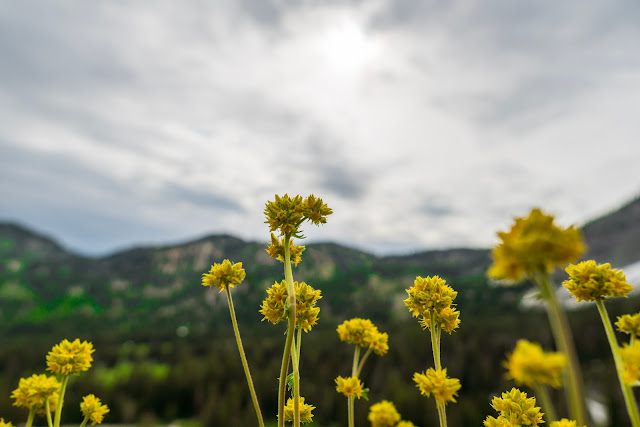 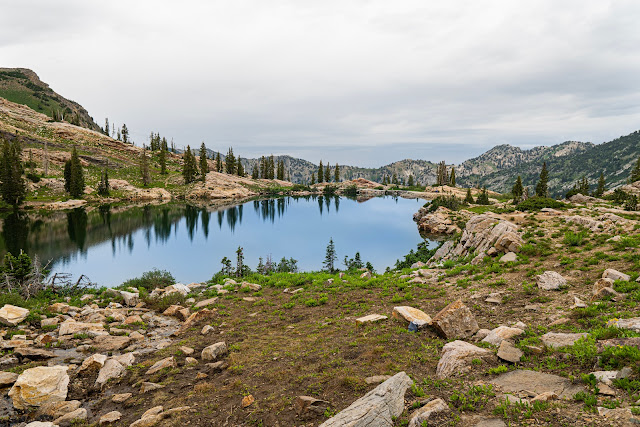 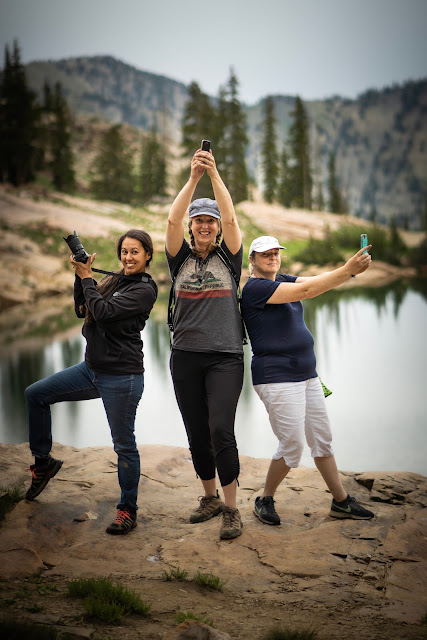 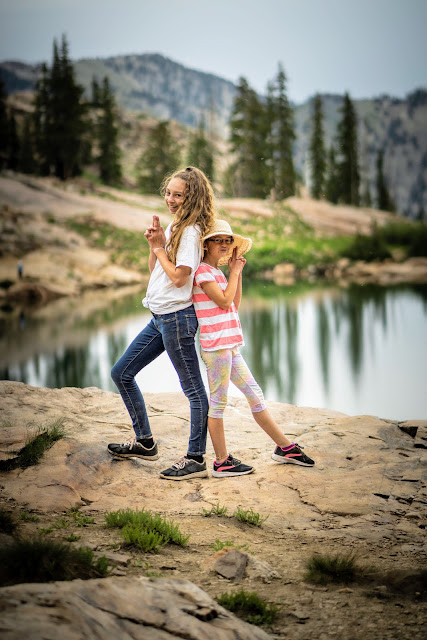 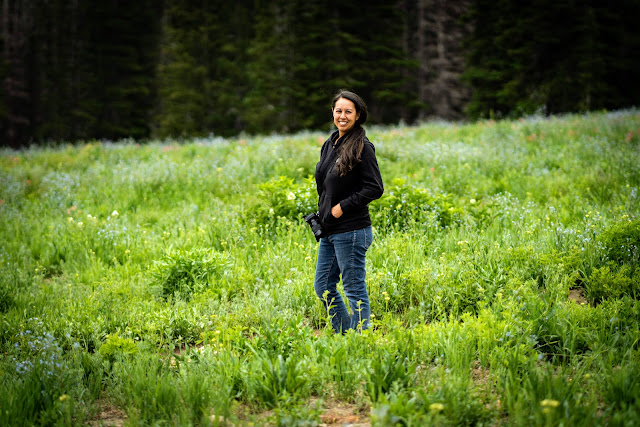 Got home and ate leftovers for lunch, then enjoyed some free time.  I took a nap, blogged our last 4 photo sessions, shucked corn for dinner, which was AMAZING! We had a "Jungle Boil" or "Shrimp Boil.  Tron's co-worker came and fixed it for us.  Potatoes, onions, carrots, kielbasa sausage, corno on the cob, broccoli, cauliflower, brussel sprouts and shrimp all boiled to perfection, then served on butcher paper down the center of the tables and dousted with a garlic-herb butter.  it was so delicious!  We had ice cream for dessert, too! 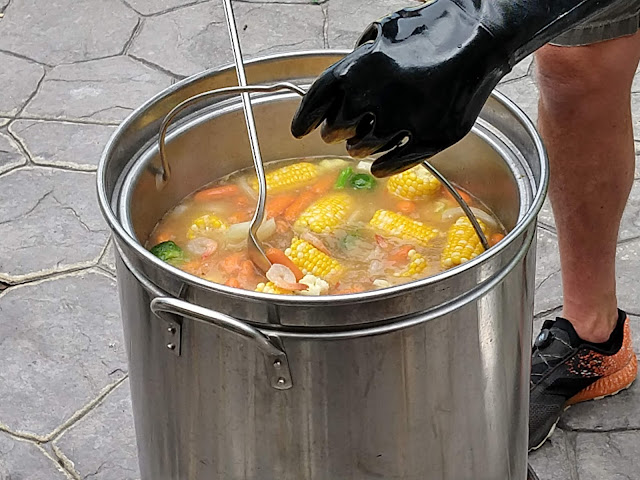 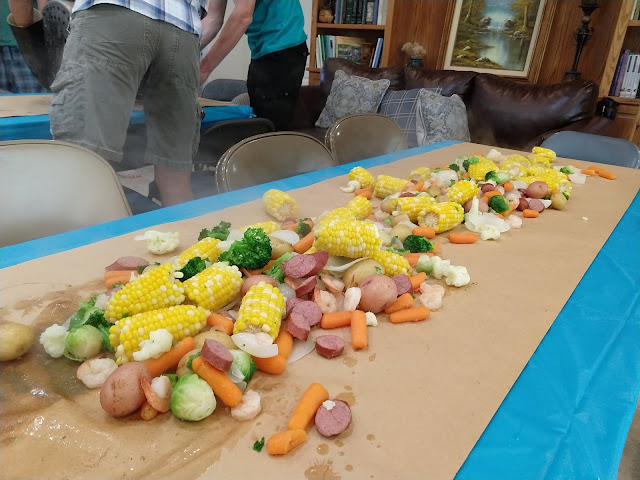 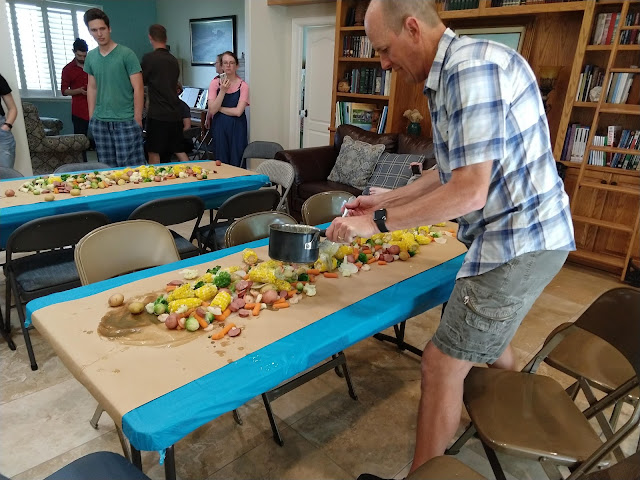 Then it was off to our horseback riding at Oak Haven in Lehi.  It was Amara's and Lily's dream and they loved it!  They had an indoor arena, and thank goodness because there was lotsa rain outside! Our girls got to canter.  Bev and Sam both fell off their steeds, but all was well. 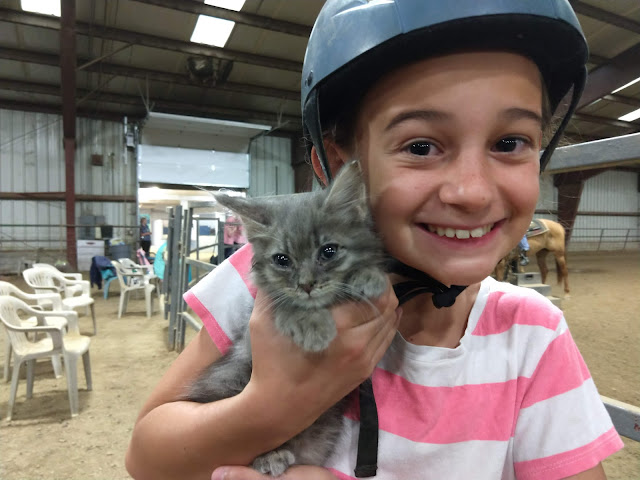 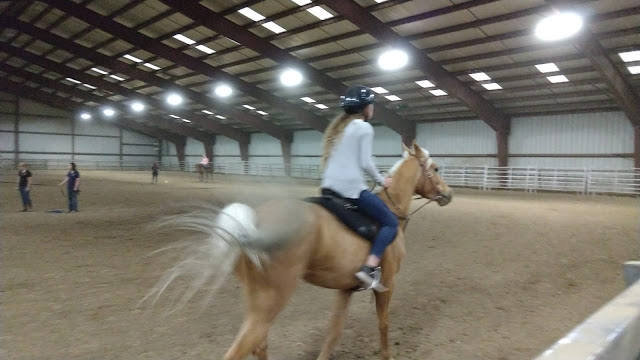 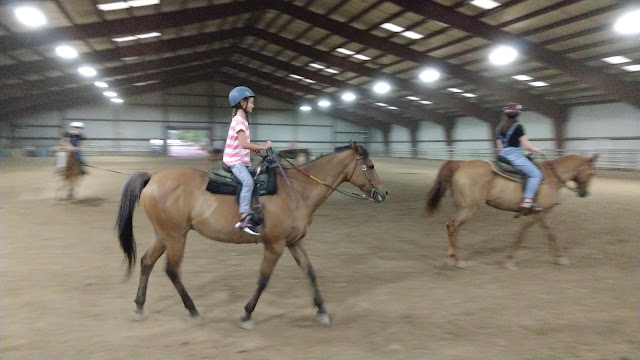 Tron and Bev made a delicious breakfast of pancakes with berry syrup, or brown sugar syrup or maple syrup or honey, AND bacon AND fried eggs.  Yummers!

Later that evening we had a fiesta!  Eva and Daphne made us yummy authentic mexican food- homemade tortillas, carne asada or chicken, topped with radishes, cilantro, onion, and sauces, and limes.  There was optional lettuce, tomatoes, and olives.  Also delicious rice pudding with cinnamon sticks, horchata, tamarind drink, hibiscus drink, and refried black beans.  I LOVED everything!  I want recipes!

Afterward we broke open a pinata outside!  It was filled with yummy Mexican candy. 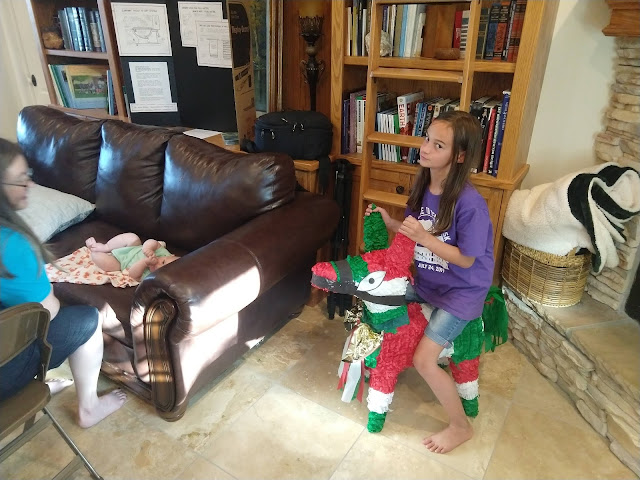 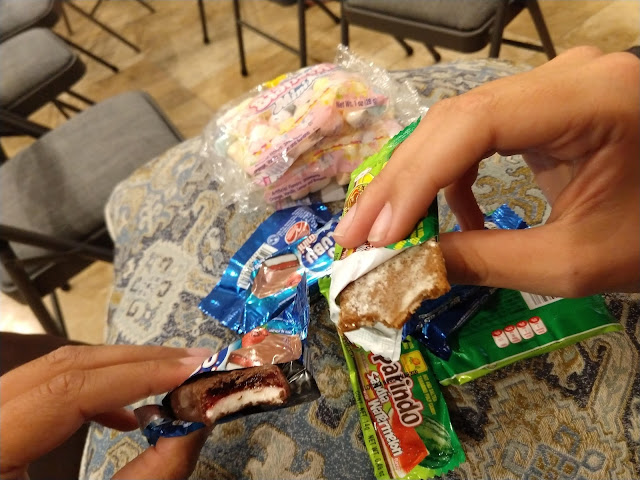 On Sunday was the official end of the reunion, but our family was still around for a couple more days until we headed out to Minersville to visit my step-sister Hayley and her family.
Posted by Lani Christensen at 12:41 PM No comments: