Guys!  I was spoiled on my birthday.  My sweet Amara made me breakfast in "bed," but since I was already up and doing my scripture study in the office, she brought it to me there.

The girls decorated the living room for me!  Amara also surprised me with a shower of confetti as I walked out to start doing Zumba. 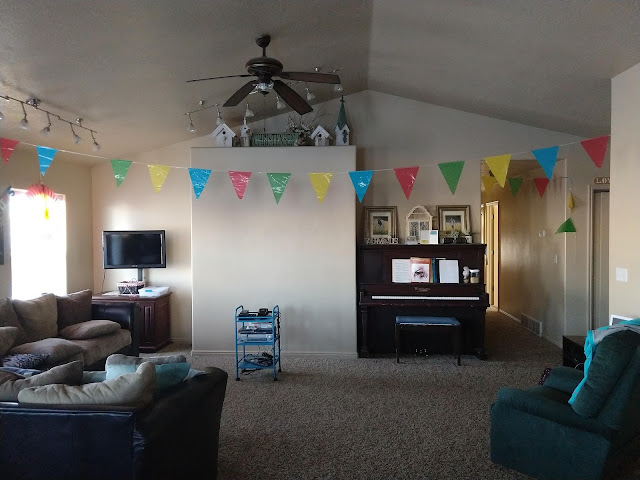 Then my mom and girls joined me for Zumba-ing! 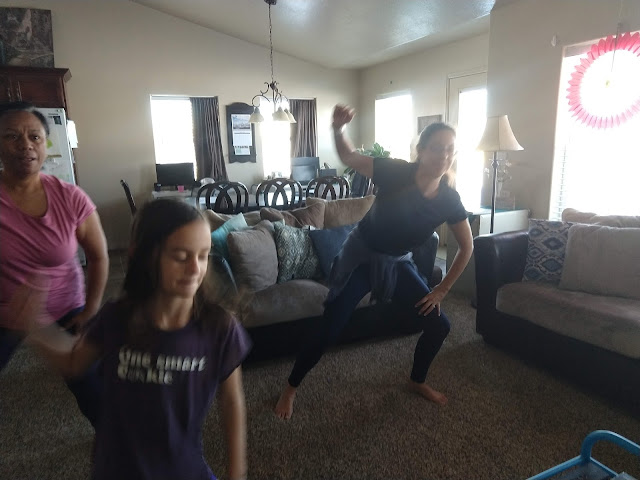 My mom took me out to lunch.  I tried to eat light because I knew we were going out to eat for dinner.  Well even with my "light" eating I was still full when dinner came around.  So, instead of going somewhere nicer in Vernal, I opted to stay close and eat at China Star.

I ate maybe 2 bites and was so done.  I took the rest home for lunch the next day. 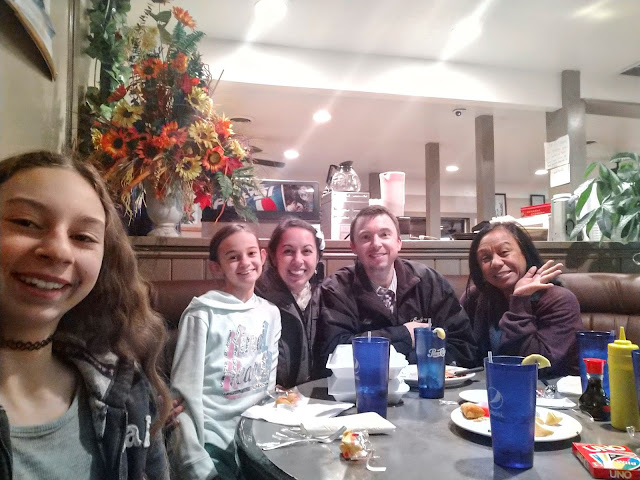 I saved a corner of my stomach for a bite of Amara's cake she had been working on all afternoon.  We assembled it together when we got home.  It was a triple layer red velvet cake with chocolate chips in it, and the middle layer was basically a cheesecake (cream cheese, whip cream, vanilla pudding), and the whole thing was covered in fudge frosting. 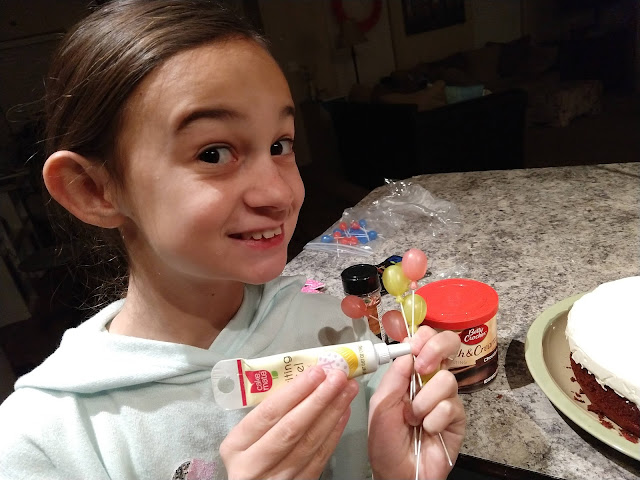 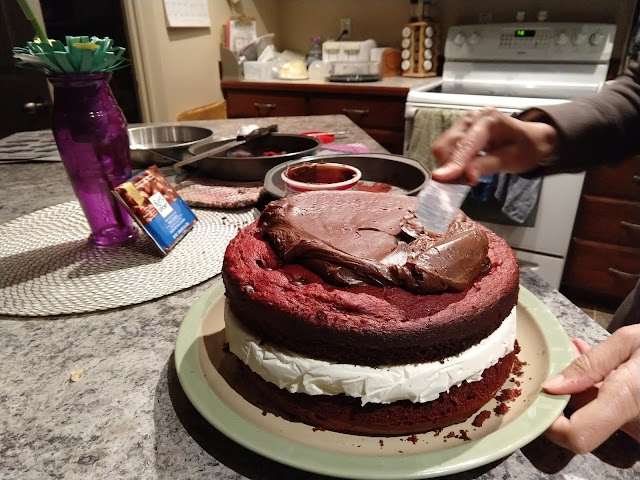 She decorated it so cute just for me! 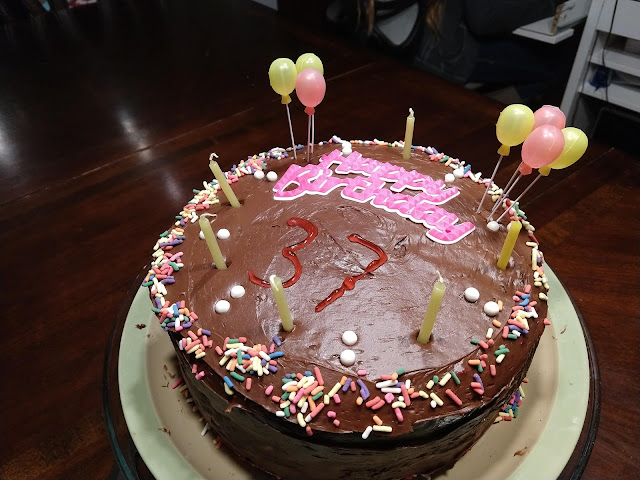 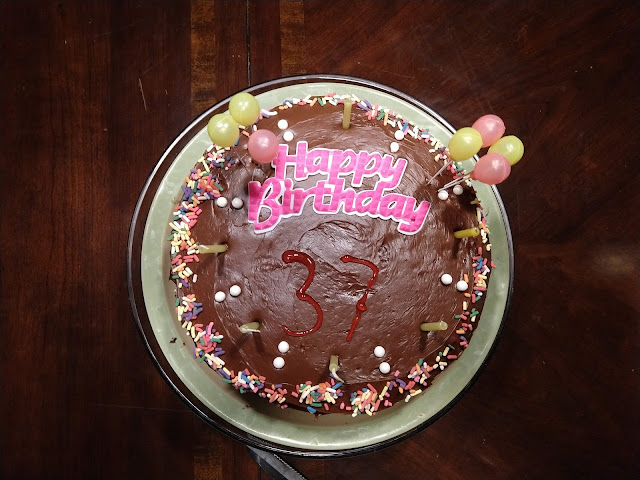 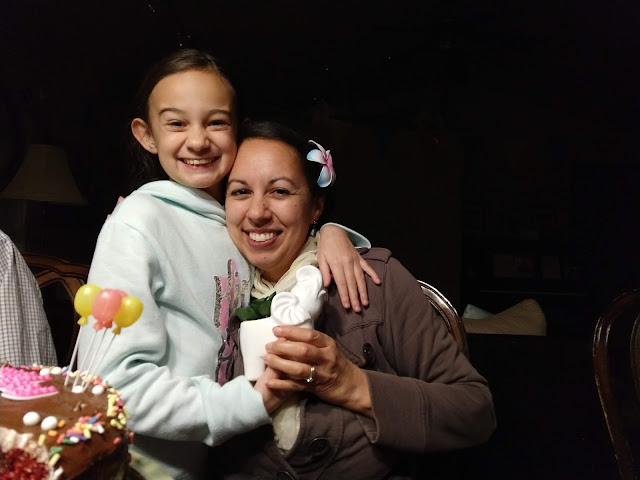 We ended the night with big slices of cake and a couple games of Kingdomino, a fun game we got for Christmas from Micah and Mandy's family. 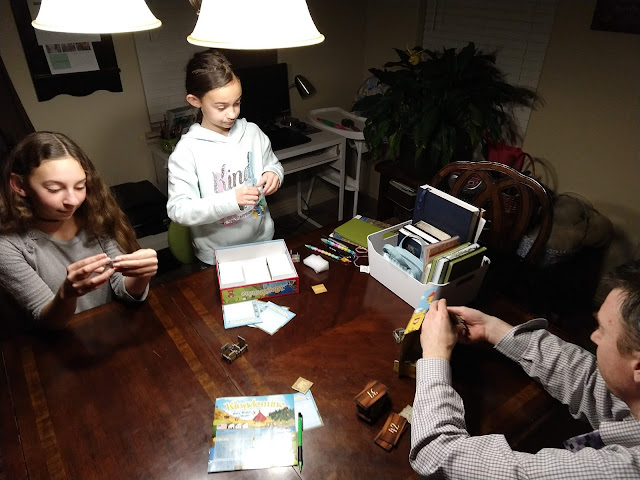 The relief society presidency also took me to lunch for my birthday on a different day. We went to a new place called "High Country Pizza."  I had a calzone and enjoyed the company of my fellow sisters I serve with.  The food was good, too.
Posted by Lani Christensen at 12:17 PM 1 comment:

I'm using an annoying app to type this on my phone. 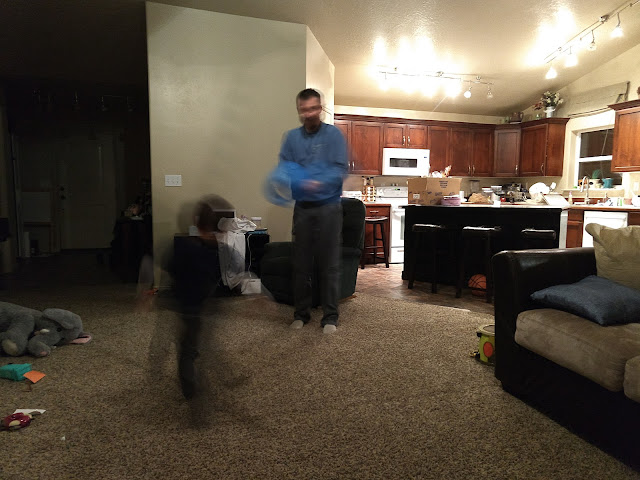 It's going to post all these pictures in random order, so oh well. 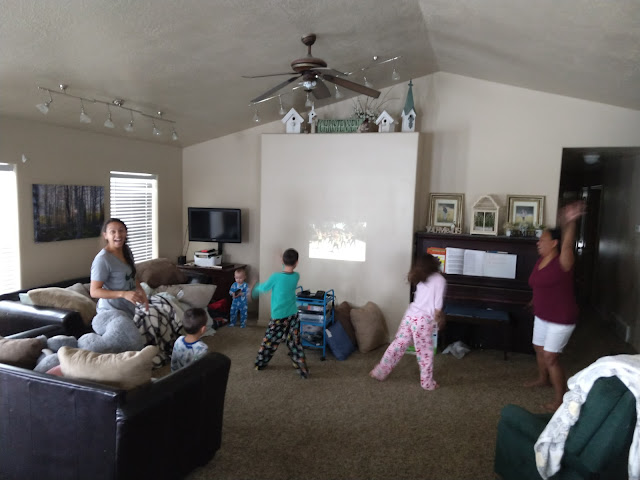 I just wanted to remember forever that my sister came to visit us last week when Devon had a Friday off from school. They arrived around 5:30 pm on Thursday. We ate April's favorite, Hawaiian haystacks, for dinner.

April slept on the couch and had her boys share a room together.  When we woke up the next morning, they joined us for some Zumba!

We decided to take them to the Win-on Buffet in Vernal for lunch, which was awesome! Amara didn't want to go out to eat, so she stayed home and babysat Bridger.  That's right. My baby is babysitting. Excuse me while I check into the geriatric ward...

The buffet was good stuff! Devon was excited to see jello there. He had 3 plates of food, each with a serving of jello.  He also likes the chocolate pudding and beef  and broccoli. Tommy was a good eater too, eating an entire plate of sushi, then dessert. When I asked him what I should go get for Lily, he said, "hot dog, soup, and a marshmellow." The sushi was really good, by the way.

We took them to Gale's bookstore before we headed back home.

Later in the afternoon we hit up the bread store up the street. April's favorite! It sells bread for only 50 cents a loaf!

Dinner we decided to order from Domino's Pizza. (What! A brand new restaurant in Roosevelt!) We made an outing of it by piling everyone in April's truck and going through the drive through, which was so cool they even had that because it was cold, foggy, and snowy outside.

The pizza was good, but the highlight of the evening was when Steve made an appearance wielding his Christmas gift, an Air Cannon. He got the kids running and ducking around the room, challenging him to try and hit them.  My favorite was watching Tommy's straight hair puff up when he'd get hot with the air in the face. Bridger was sitting in his high chair and was an easy target. He thought it was pretty fun and funny to get hit with air!

All in all, it was a really enjoyable time, albeit too short. They ended up leaving at 7am in the cold and fog the next morning.  We love you guys! Come back soon! 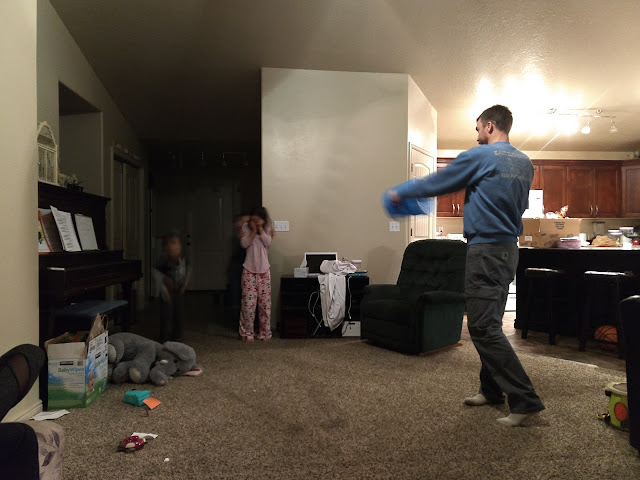 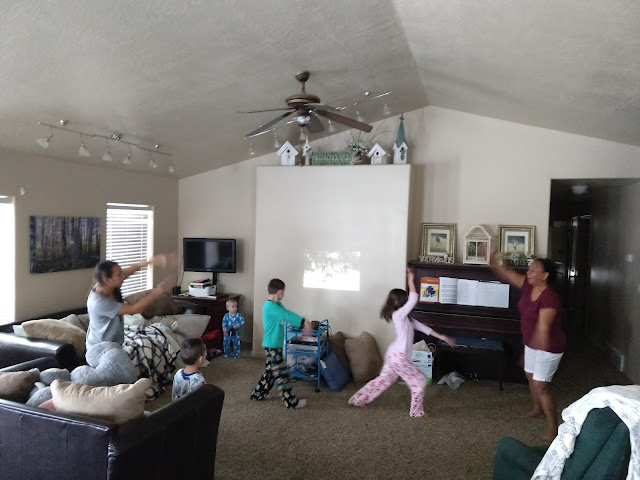 Posted by Lani Christensen at 8:56 AM No comments: 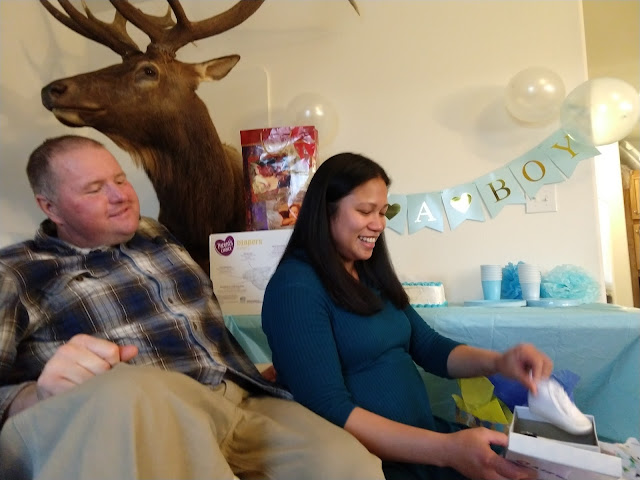 Okay I'm not sure if this is truly a Filipino style baby shower, because I have never been to a baby shower in the Philippines, but seeing as this shower was attended by 89 percent Filipinos, I'm gonna make that judgement call. 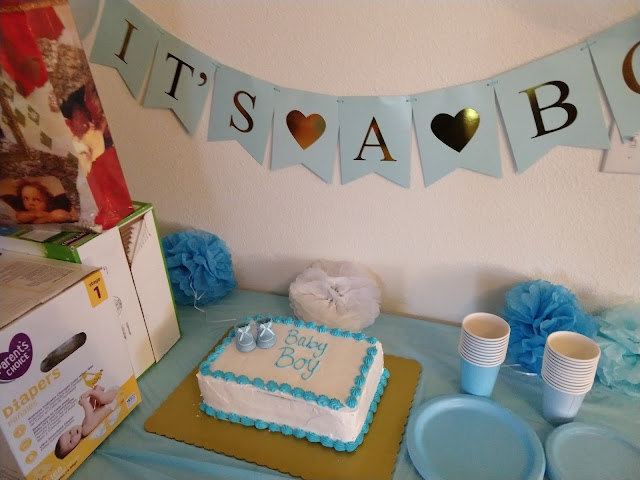 My friend Cris Emmett is pregnant and we are all very happy for her. She has been trying for 9 years to have a baby, and she and her husband are now blessed to be pregnant with a baby boy.  She invited me and my mom to her baby shower. My mom couldn't make it, so I went alone. It was fun to see a lot of the Filipinos that I usually see at Erlinda and Leandro's house. They were all talking Filipino to each other and I couldn't understand a word. They also each brought a dish of food and all their kids. Some brought their husbands as well. I did not know it was a family affair or that we should bring food, but I didn't feel too awkward about that. I would have if I had been told, but seeing as I had no idea I won't hold myself accountable. The only uncomfortable part was feeling left out of the conversations all around me. When people would remember that I was around they would start speaking English but it quickly reverted back into Filipino. It was ok though, I still enjoyed the food and company because I knew I was among friends.

When it was time to eat, there was quite the spread! There was salad, pizza, homemade rolls, Filipino spaghetti, fried Chicken, roast pork, pork adobo with potatoes, lumpia, flan, cassava, and sugar cookies. They were probably about 15 adults and 10 kids. We ate and ate and ate. It was fun for me to watch the little children get spaghetti all over their faces and dig into their pizza and spill their sodas, and scream bloody murder when the cute little house dog would come near them.  It made me wish my family had come. I did get a chance to sneak off to speak with other English speakers and enjoy some conversation with them. 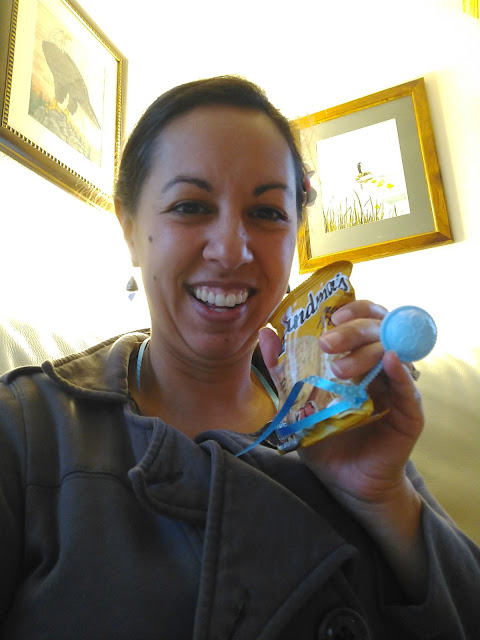 Then we played games. They gave us a baby rattle with some ribbon tied around it for us to wear as a necklace. We were given the instructions to take another person's necklace if they said the word baby. The person with the most necklaces at the end got a grand prize. I did not win, one of the kids did and I think they had five or six necklaces. However, I didn't lose either. I kept my necklace the whole time, so I got to choose a treat from the candy jar. I got peanut butter cookies. 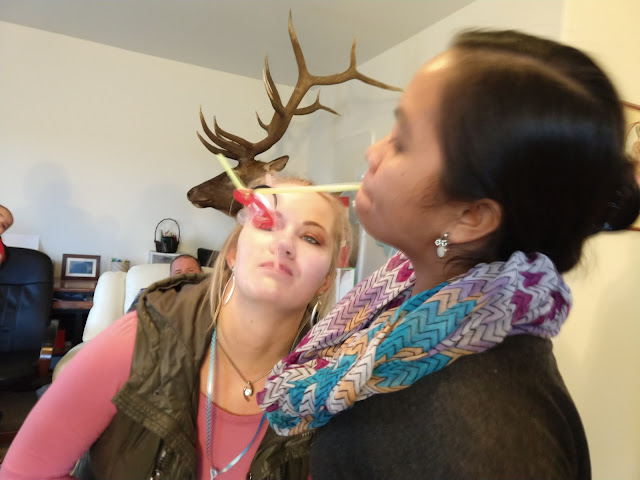 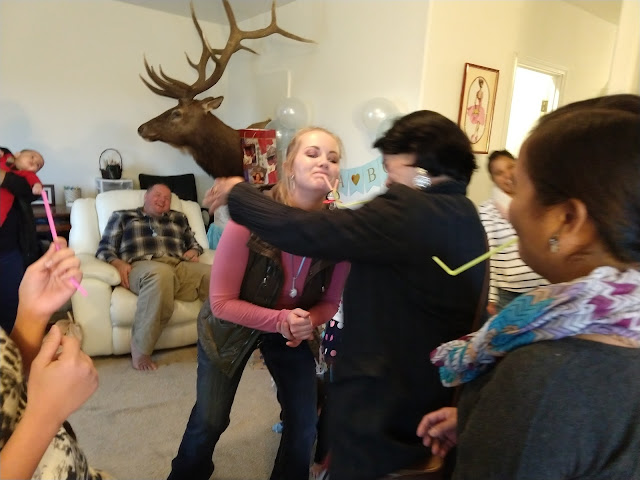 The other game we played was a passing game using straws in our mouths and a pacifier that had a ring on it. I did not win that game either. Apparently we were all making funny faces trying to concentrate on getting the pacifier on our straw. 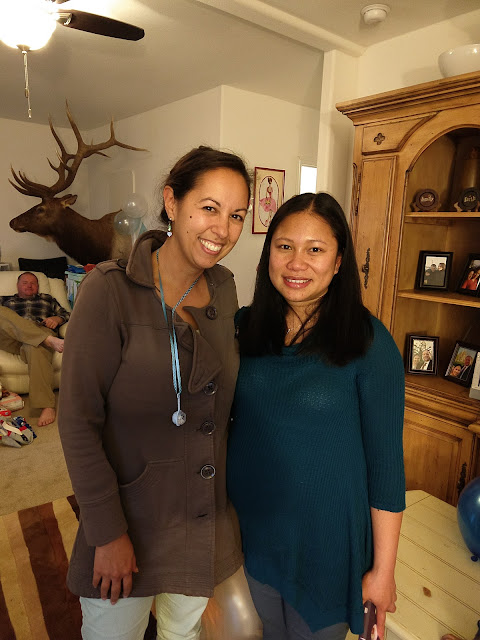 We opened gifts when the games were done.Then we had cake, as if I wasn't already stuffed silly! I made sure to take a selfie with my friend Cris before I left. Her husband did not let me leave without a giant plate of food that he dished up for my husband. It was a wonderful time.
Posted by Lani Christensen at 7:41 AM No comments: