I compiled some pics from the past few months (December 2009- April 2010) that are definite smile inducers, and I just had to share.  Enjoy the slideshow. 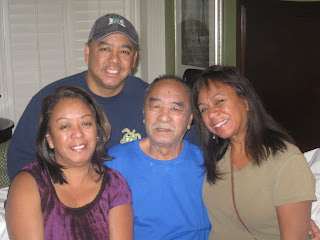 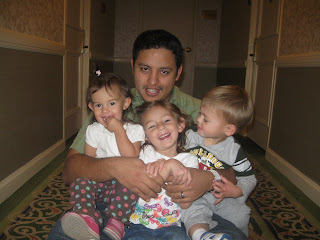 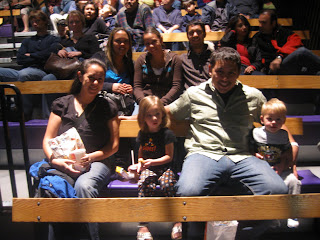 I'm finally getting around to blogging about our trip to Las Vegas a few months ago.  Grandpa Guting, Uncle Joe, and Aunty Leo were all coming to Vegas, as per Grandpa's request.  So, my mom and Aunty Raz both were able to swing their schedules so they could take the trip to have a Guting reunion.  Uilani was going also, and I wanted to take advantage of the rare opportunity to see our extended family from Hawaii and Washington.  Steve couldn't get time off work, so he stayed home; but I was able to hitch a ride with my mom and take Lily and Amara to go meet their Great-Grandpa Guting for the first time.  We stopped for a brief time in Orem to get lunch and to pick up April, who was also able to arrange her schedule to come with us.  Micah, Mandy, Jaxon and even Jacob all drove down late that night after work, so it was shaping out to be an awesome trip from the get-go.
The first night, Mom's van arrived first.  We all stayed at the Main Street Hotel and Casino and ate almost all of our meals there at the buffet.  Mom, April, and I checked into our rooms and I got my girls settled in for bed.  I also laid down to sleep and was awoken around midnight by my mom who said that grandpa had arrived and he had just been taken to the hospital.  He has had blood pressure issues, and the flight over definitely affected it.  I came out in the hotel hallway and could hear Micah and Mandy attempting to put Jaxon to sleep in one of the rooms.  I was happy to see my cousin Uilani, and my Aunty Leo, Aunty Raz, and Uncle Joe.  But Grandpa wasn't there.  I was told that there were almost a dozen paramedics attending to Grandpa and that Jake gave a blessing to Grandpa.  Jake was a little shaken up and told me that it felt like a long time since he was able to use his priesthood in that way.  We all prayed for Grandpa, that he would pull through.  Then some of us went to sleep, and others stood awake, waiting to hear news from the hospital.
I woke up in the morning to find out that around 5 that morning, my mom had gotten word that Grandpa would be alright.  She only had a couple hours of sleep, but my mom is amazing and can conquer a full day of activities relatively well, even when her body is low on energy.  We all ate breakfast, then headed to the hospital to visit Grandpa.  When we arrived, they were getting ready to release him.  So, we waited a little longer, and rented him a motorized wheelchair, so he could join us on our excursion to the mall.  Grandpa seemed to be doing well and having a great time bumping into people and things with his new "sports-chair."  Uncle Joe played Warden and tried to keep him under control for the most part, though.  Let's just say, Grandpa's reaction time has slowed up a bit.
I couldn't help but laugh as I watched Grandpa trying to maneuver all the tables and chairs in the food court.  He full-on pinned a guy against the table he was eating at.  Uncle Joe apologized and helped Grandpa reverse, but he reversed too much and sent a food court table screeching against the tile for several feet.  The magnified noise drew a lot of attention our way, only to have the wheelchair/ sports-scooter thrown back into drive and pin the same man back into his table, this time with a bit more force.  Another apology, another reverse, this time with a little more room, and finally, he cleared the slightly agitated man's chair, however, not without first catching the edge of his table, sending the food earthquake-fashion upon the surface of it, and causing yet another metal-on-tile screech as the table moved enough to get the motorized wheelchair through. It was hilarious to witness, at least for me.
Grandpa had renewed energy when he was around his great grandkids.  He was back to business making trouble.  He grabbed a balloon that was attached to a long straw and weakly stood up from his wheelchair and began to hit Jaxon over the head with it incessantly.  Jaxon was not having fun, but I'm not sure grandpa really grasped that.  Micah put an end to it all by grabbing the balloon and got grandpa back.
The mall was fun.  We rode the carousel, shopped around, and ate at the food court before heading back to the hotel.  Mom slept in my room so she could be with Amara while she slept and I could go out with Lily, April, Jake, Micah, Mandy and Jaxon.  We went on the strip and stopped by the Bellagio and Circus Circus to watch some free shows.  It was fun.
We had breakfast in the morning with everyone before we had to head back home.  It was hard to say goodbye.  I'm so glad we got to see everyone and have a weekend of fun.  Oh, and my girls were a dream.  They were very well behaved both in the car and everywhere we went.  I made a photobook/slideshow using Smilebox.  See below.
Posted by Stephen Christensen at 1:00 PM No comments: