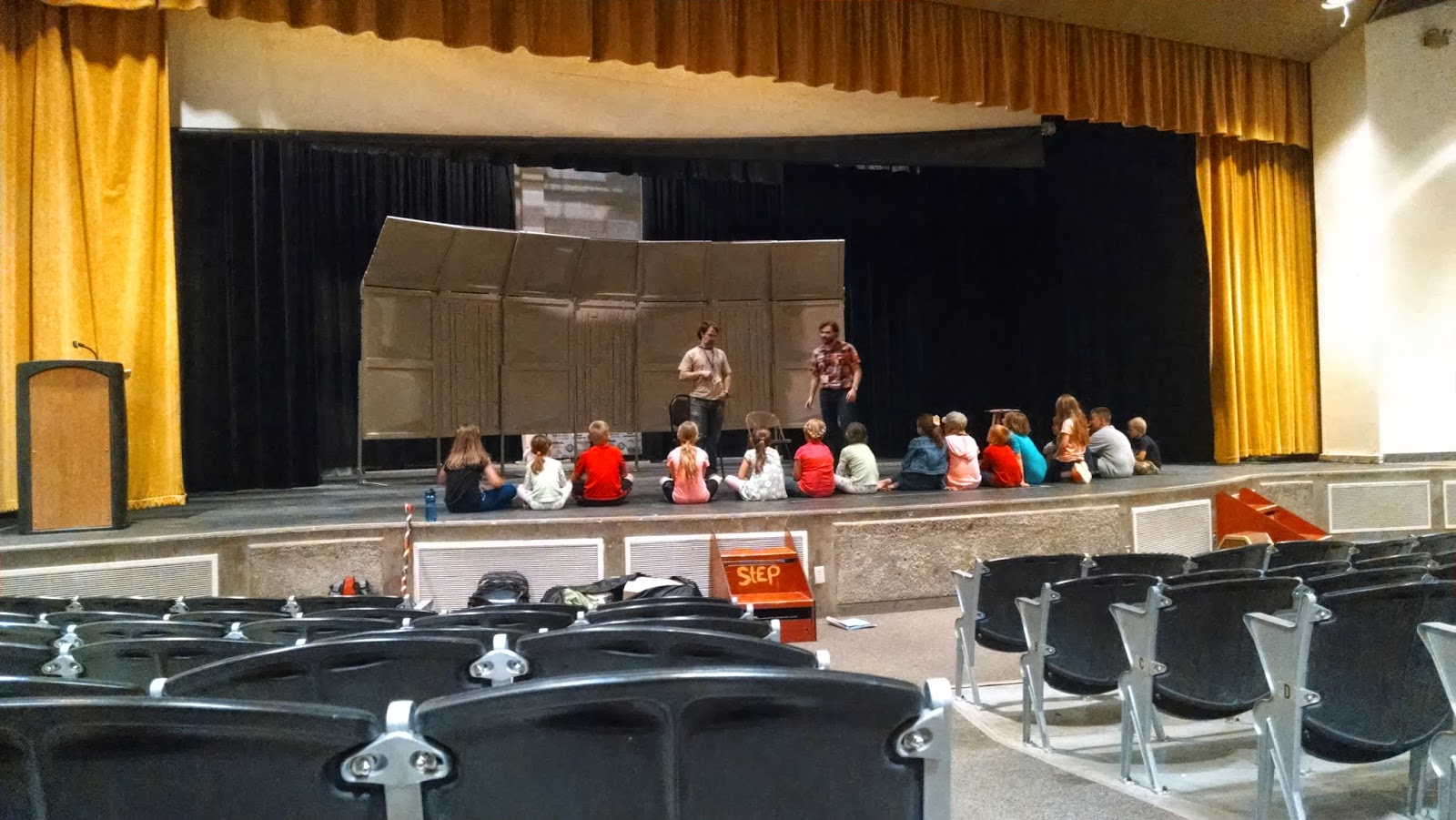 Missoula Children's Theater (MCT) is a renown traveling group of mentors that goes into communities in the U.S. and does everything from auditions to rehearsals to a theater production in one week's time with the kids in the community.  It's pretty remarkable.  At the beginning of this summer, they came to Roosevelt and put on "Blackbeard the Pirate." 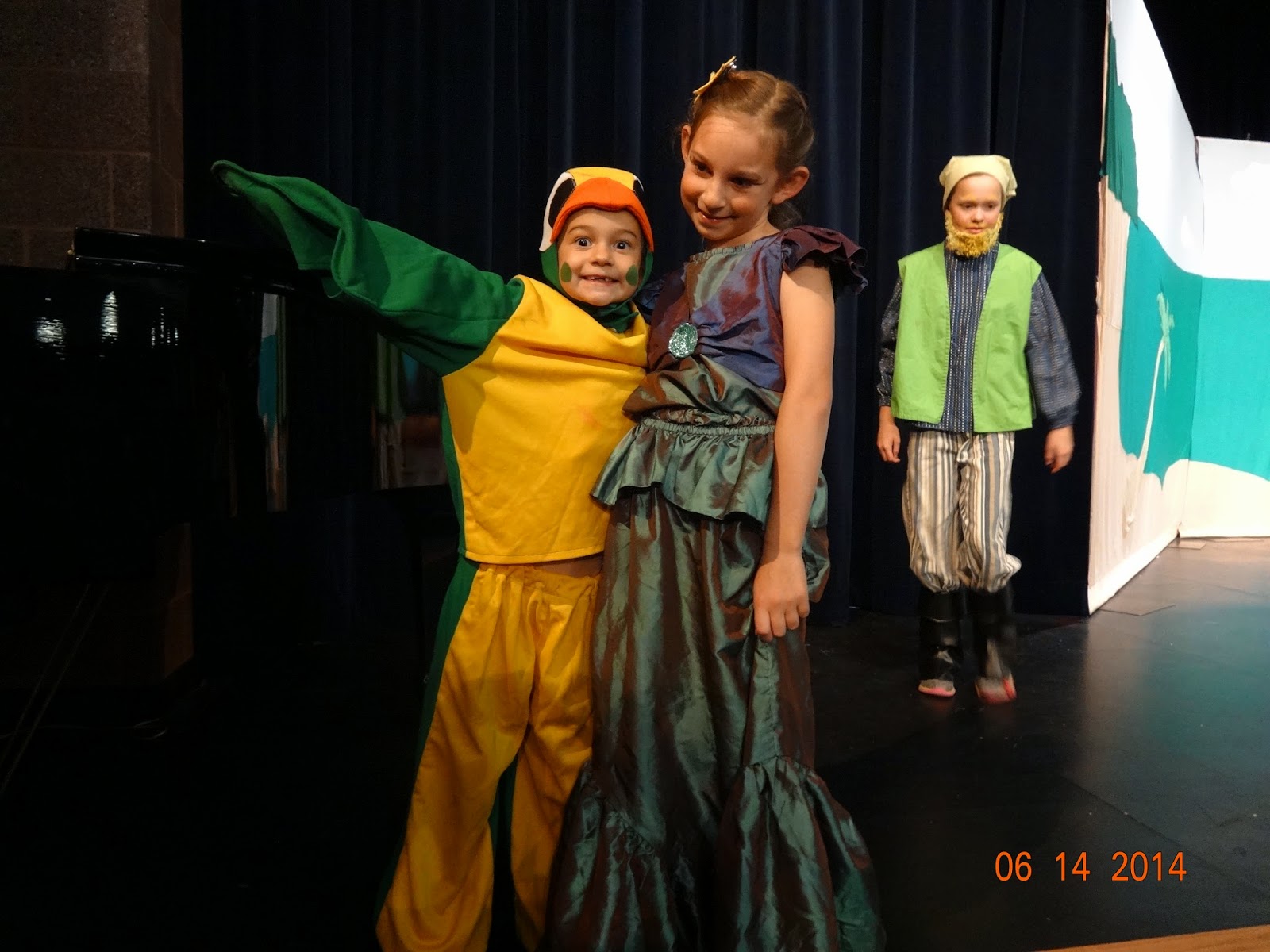 I brought my kids to the auditions and hoped that they would get chosen.  I was so happy to hear that Lily scored the part of Mermaid and Amara got to be a parrot.  I felt bad for the 10 kids that didn't get parts.  Everyone, however, was still invited to attend the acting and makeup workshops during the week. 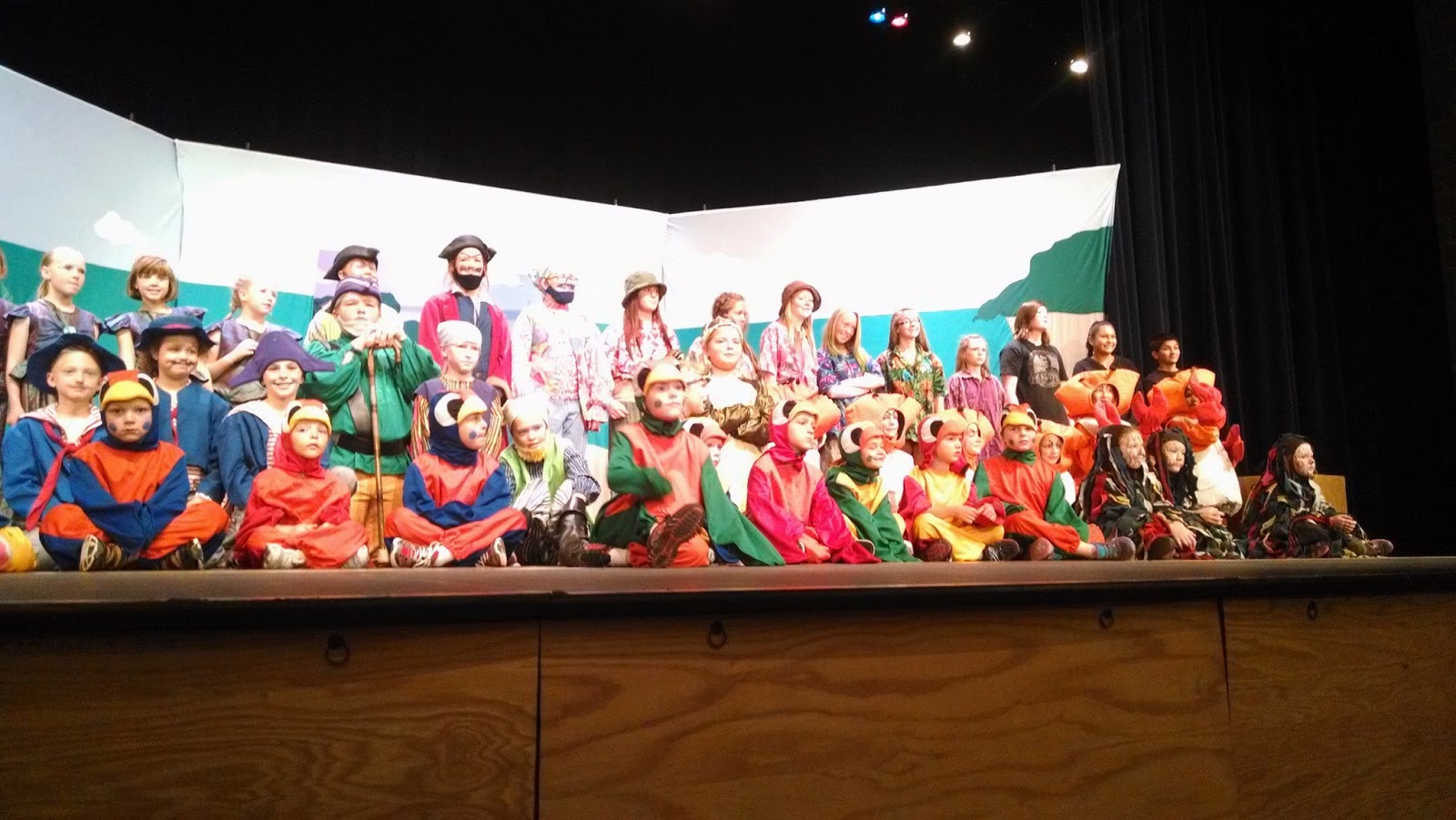 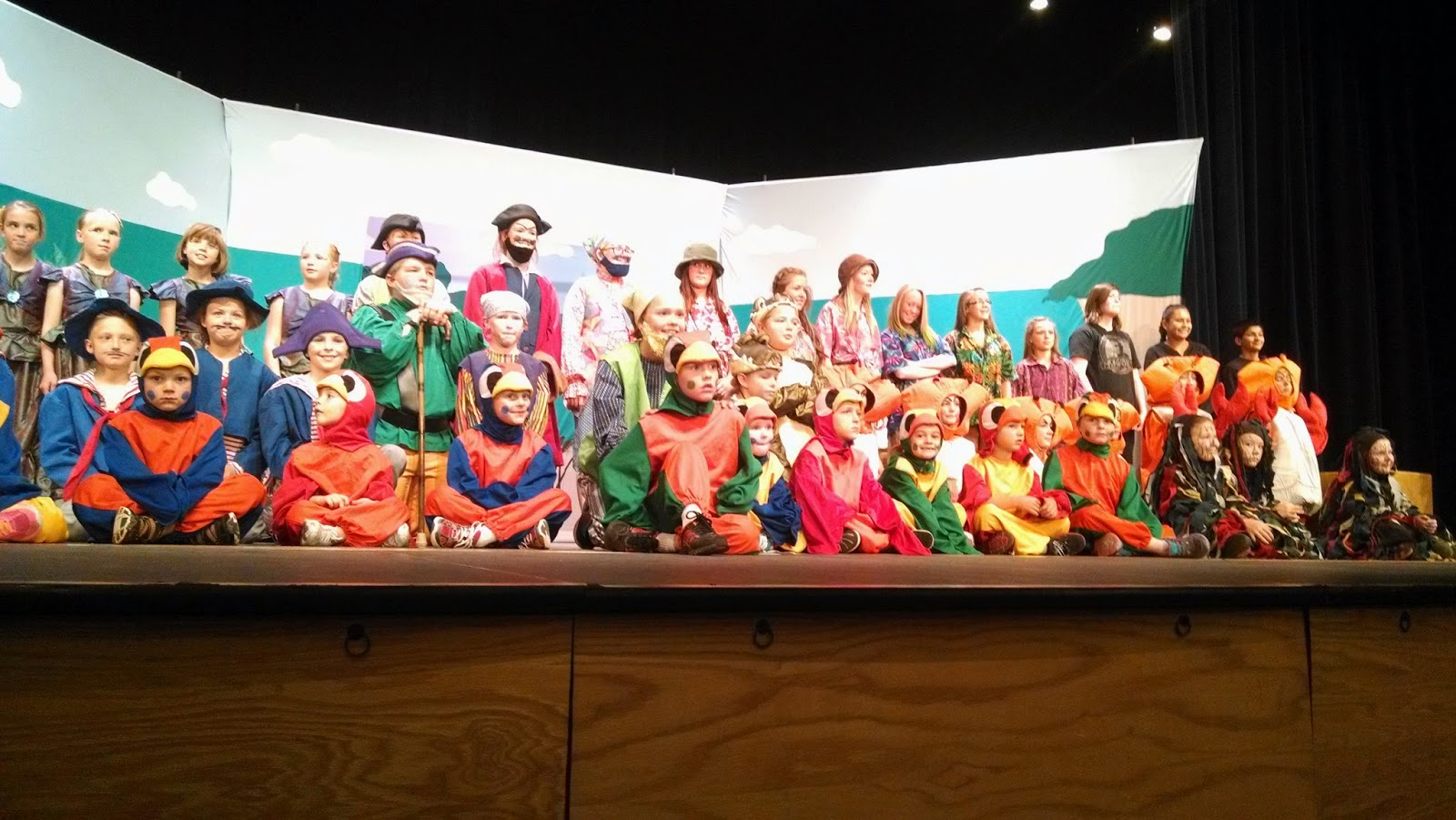 Amara loves to pretend that she is a bird at home, so the part of parrot seemed to fit her well.  Her costume was kinda baggy by her legs, but she said that if felt pretty good.  There were these places where you could stick your hands through the wings that were kinda like mittens so that you could flap your wings. 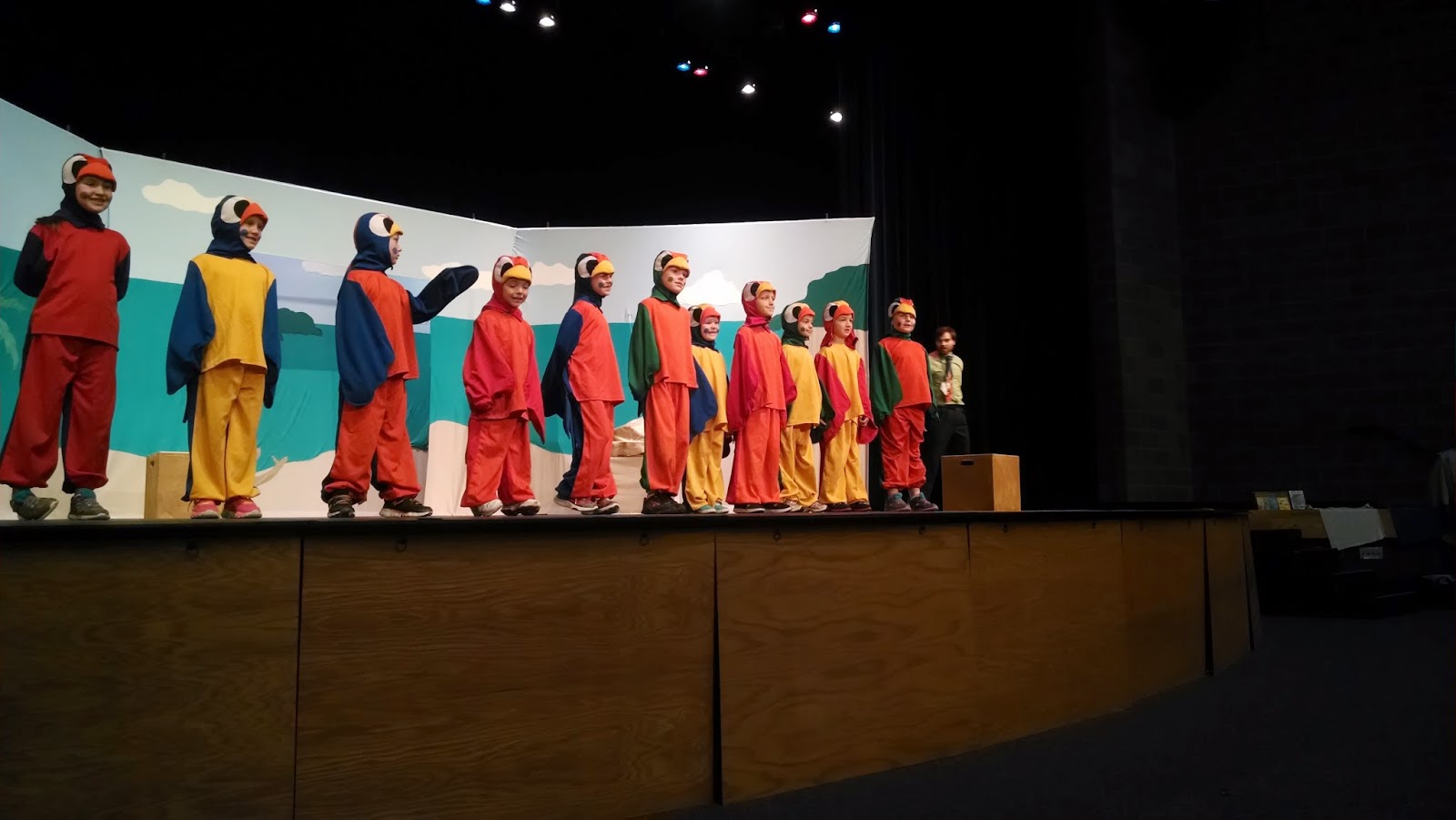 Amara thought it really was fun to flap her wings and be in a parrot costume. 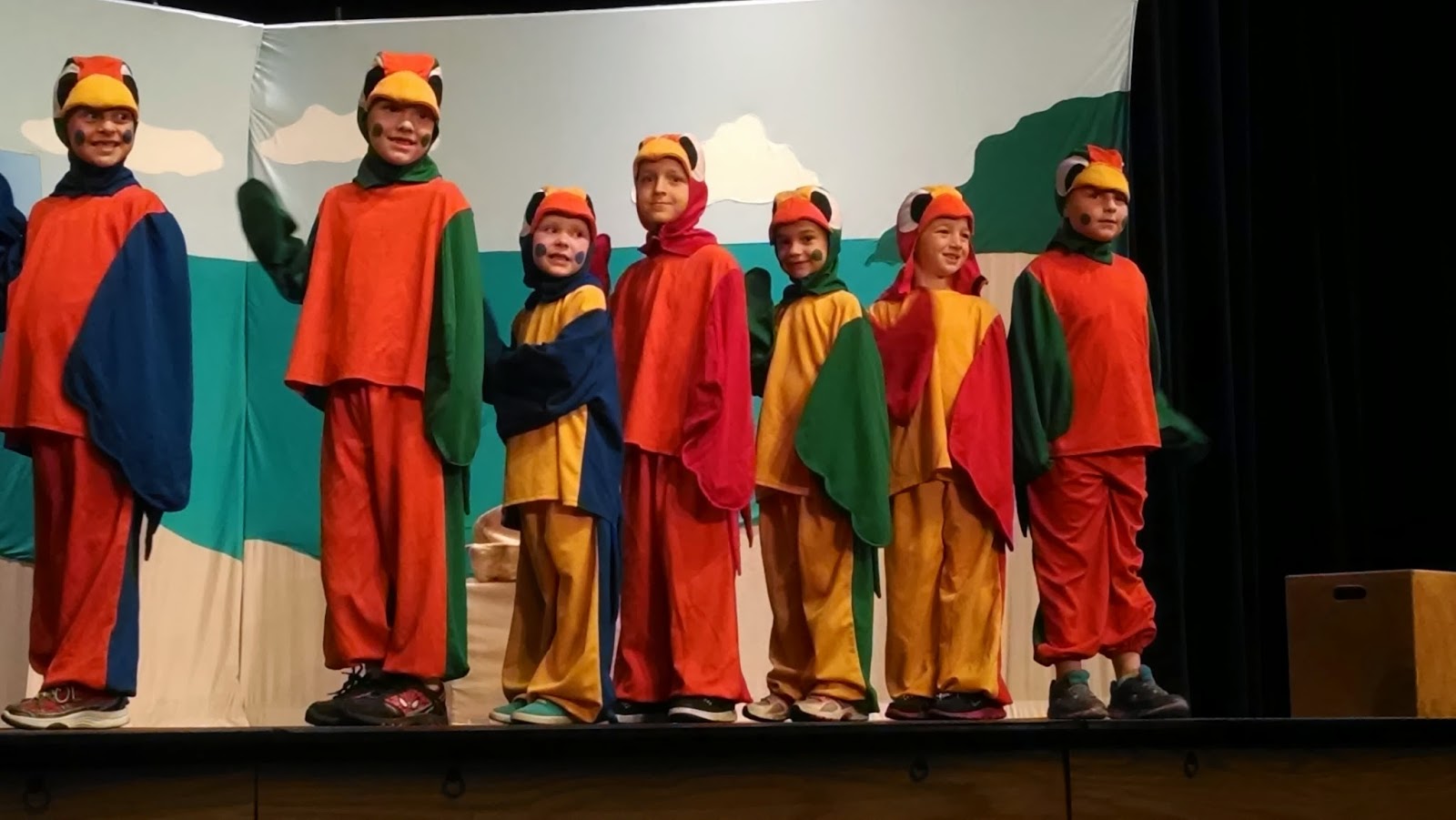 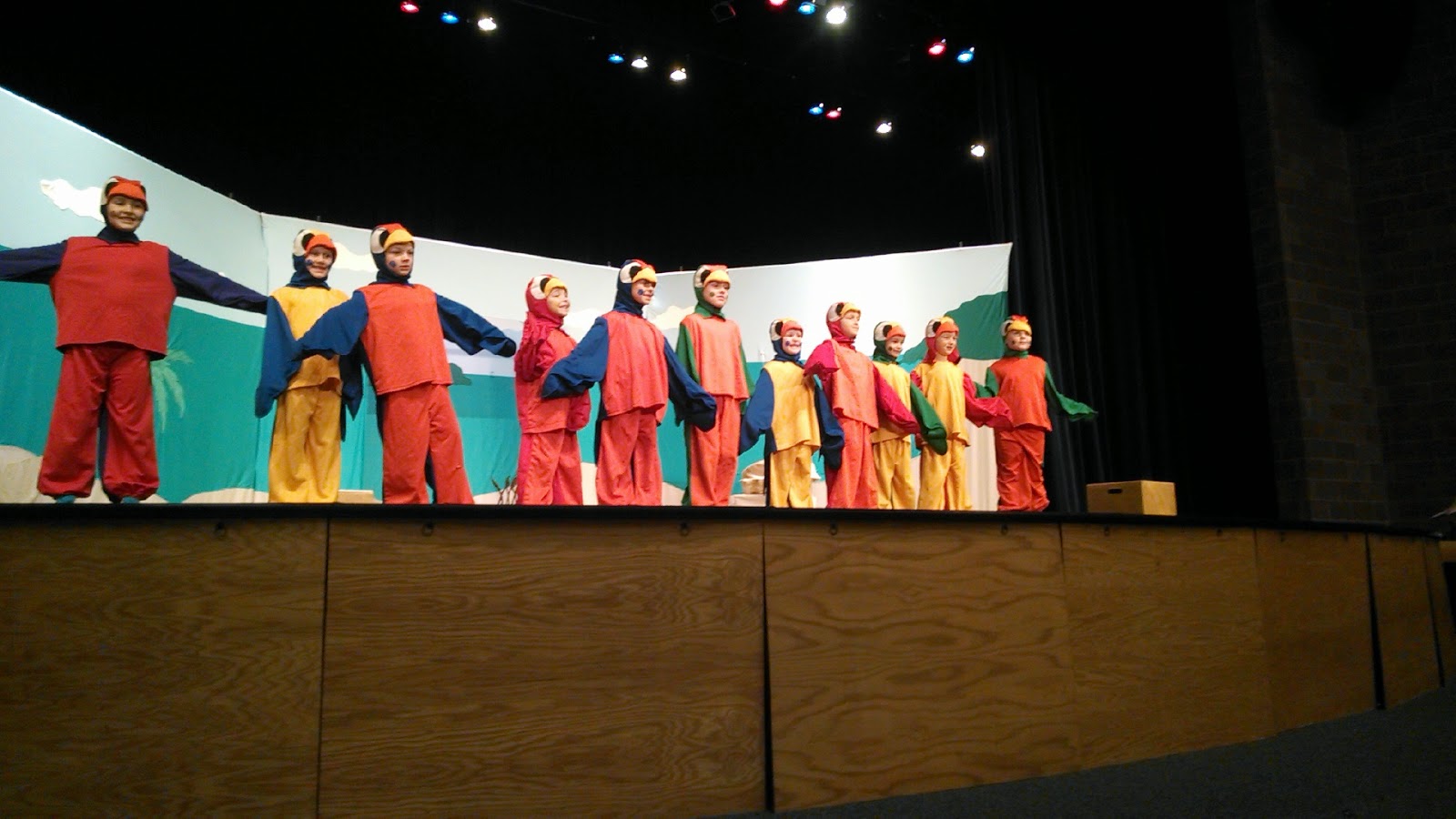 The only other thing that Amara would have liked to have been was a mermaid, like her sister. 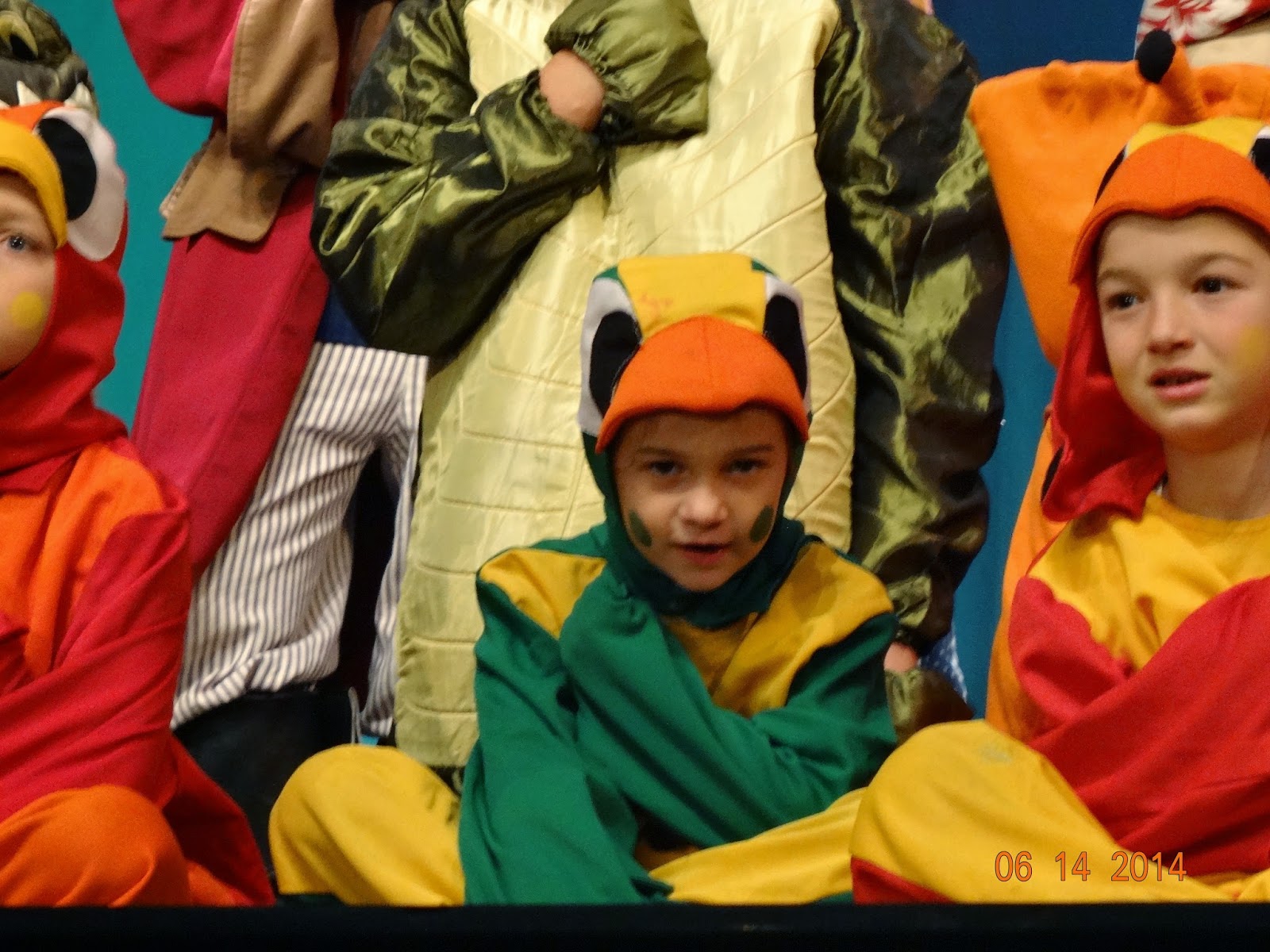 She made friends with a lot of her other fellow parrots. 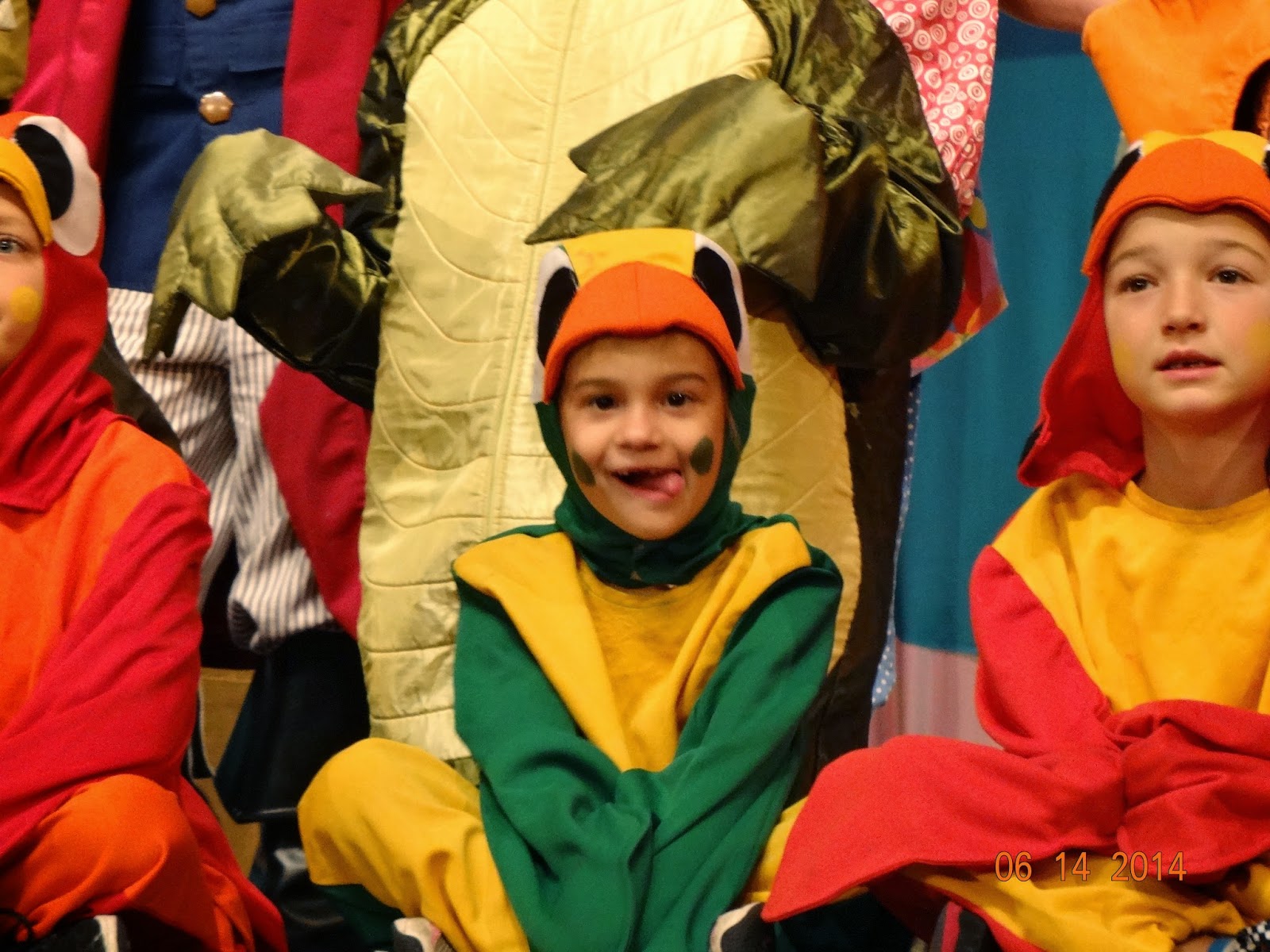 Amara's part was learned completely in 2 days.  On day one she learned all the songs.  Then on day two she learned when to come on stage, and they also rehearsed by going around some chairs to learn where to go, and she said that she memorized it pretty quickly. 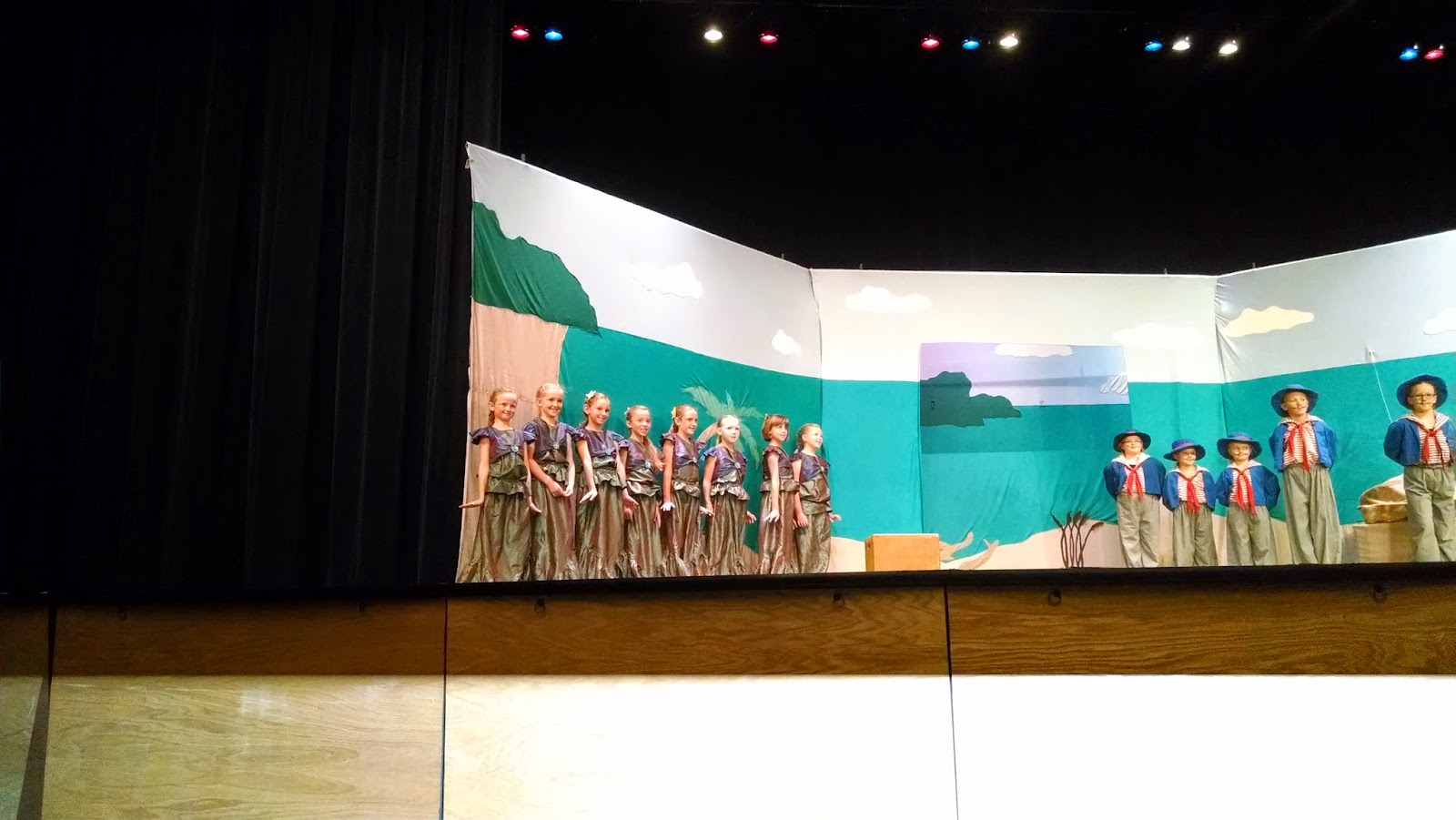 Lily had the time of her life being a part of this production.  She looked forward to her rehearsals everyday and even missed it a lot when it was all over.  The first day it was tricky to remember all the words to the songs, but after that, it got easy.  Mermaids didn't get very many words to memorize, so it wasn't too hard.  Lily's line in the play was addressed to 2 crocodiles that were fighting, she said, "Why is that?"  She said it with such clarity and expression that it would have brought tears to your eyes!  It did mine. :) 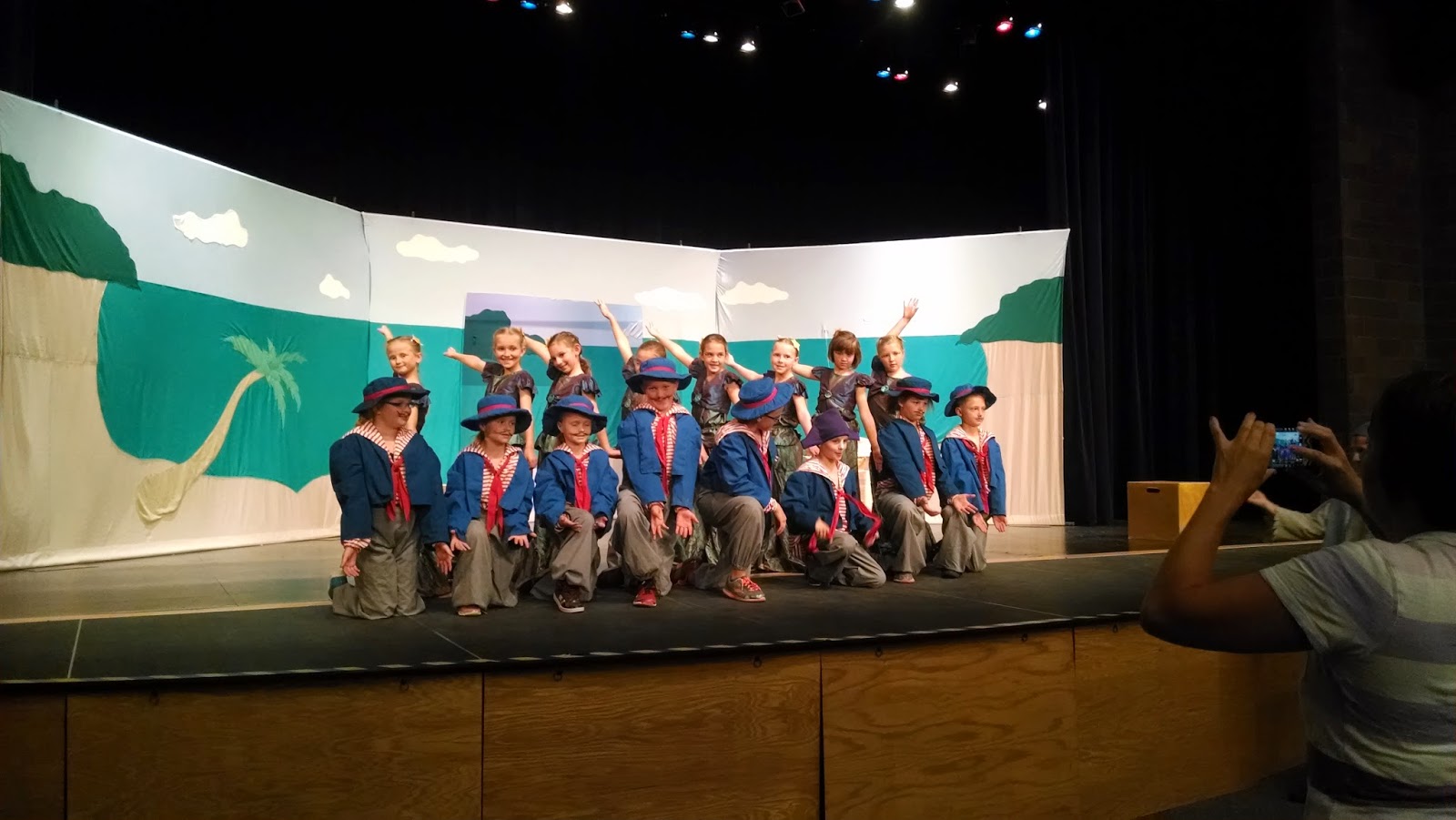 Backstage, Lily told me that they would play rocks-paper-scissors very quietly while they were waiting for their turn on stage.  She had to listen for when it was their turn to go out and sometimes she would refer to the pirates' script.  There was also a teenage helper backstage who was helping the parrots stay quiet, because they were the youngest group, and she had a full script. 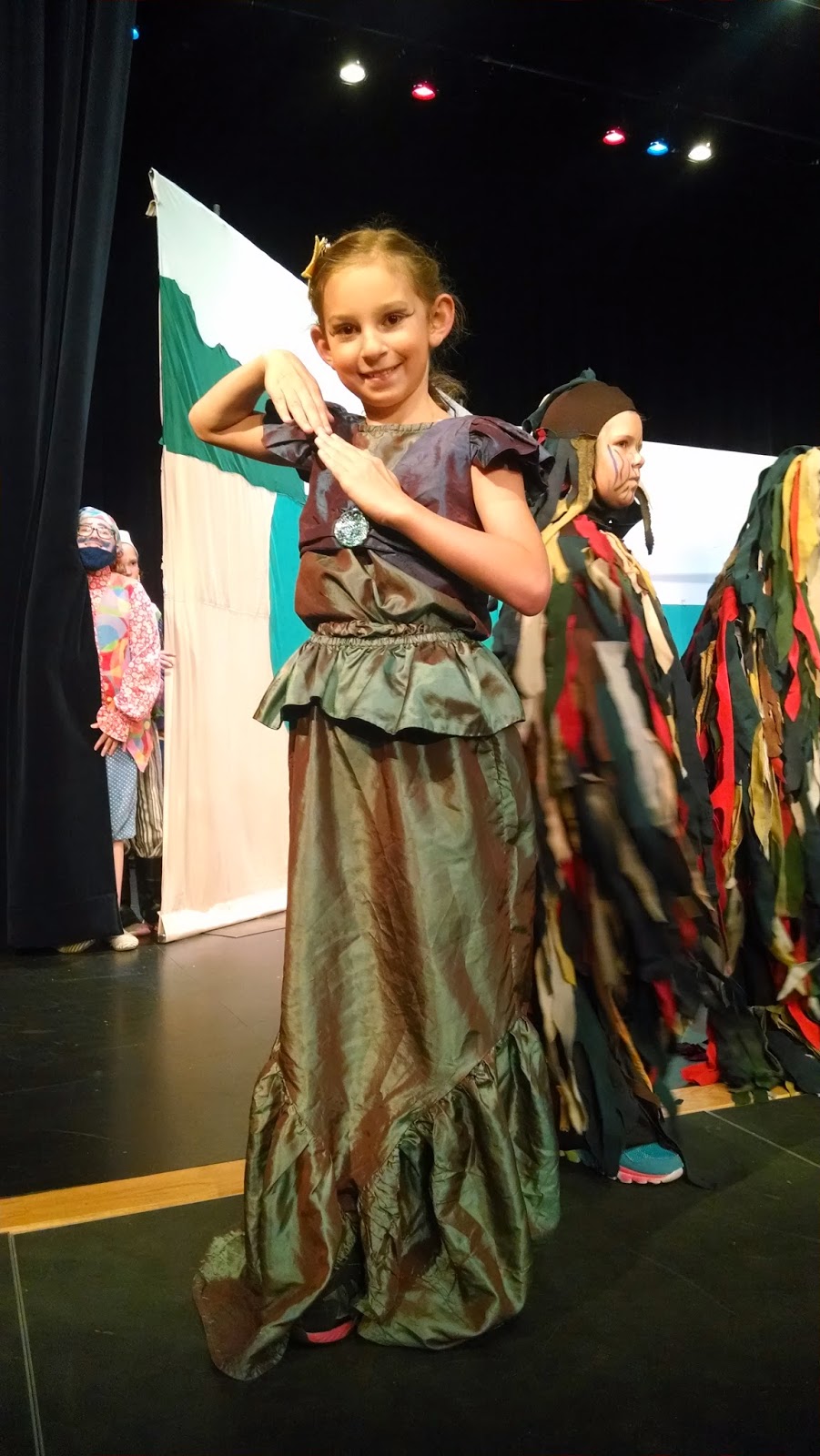 At rehearsals they would practice and learn new parts.  I asked Lily if it ever got boring, but she said, "Not really, because you were either practicing or watching someone practice.  And you could also whisper quietly if it wasn't your turn."  They got to practice walking on stage like different animals like a penguin or seal or monkey, just to keep the kids creative. 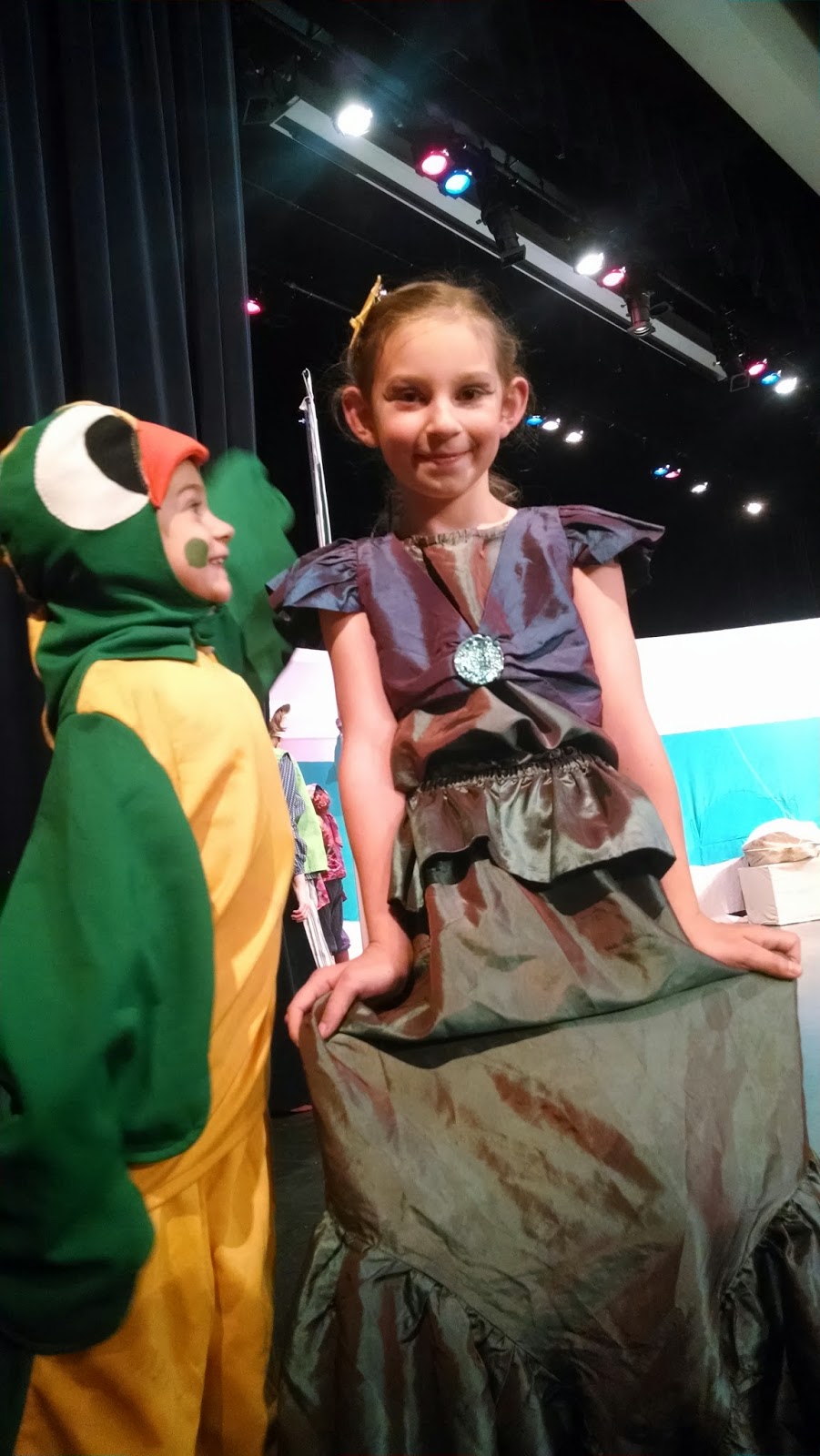 Steve and I attended both of the performances on Saturday.  Lily asked me what my favorite part of the play was- that's easy- any time one of my kids was on stage! 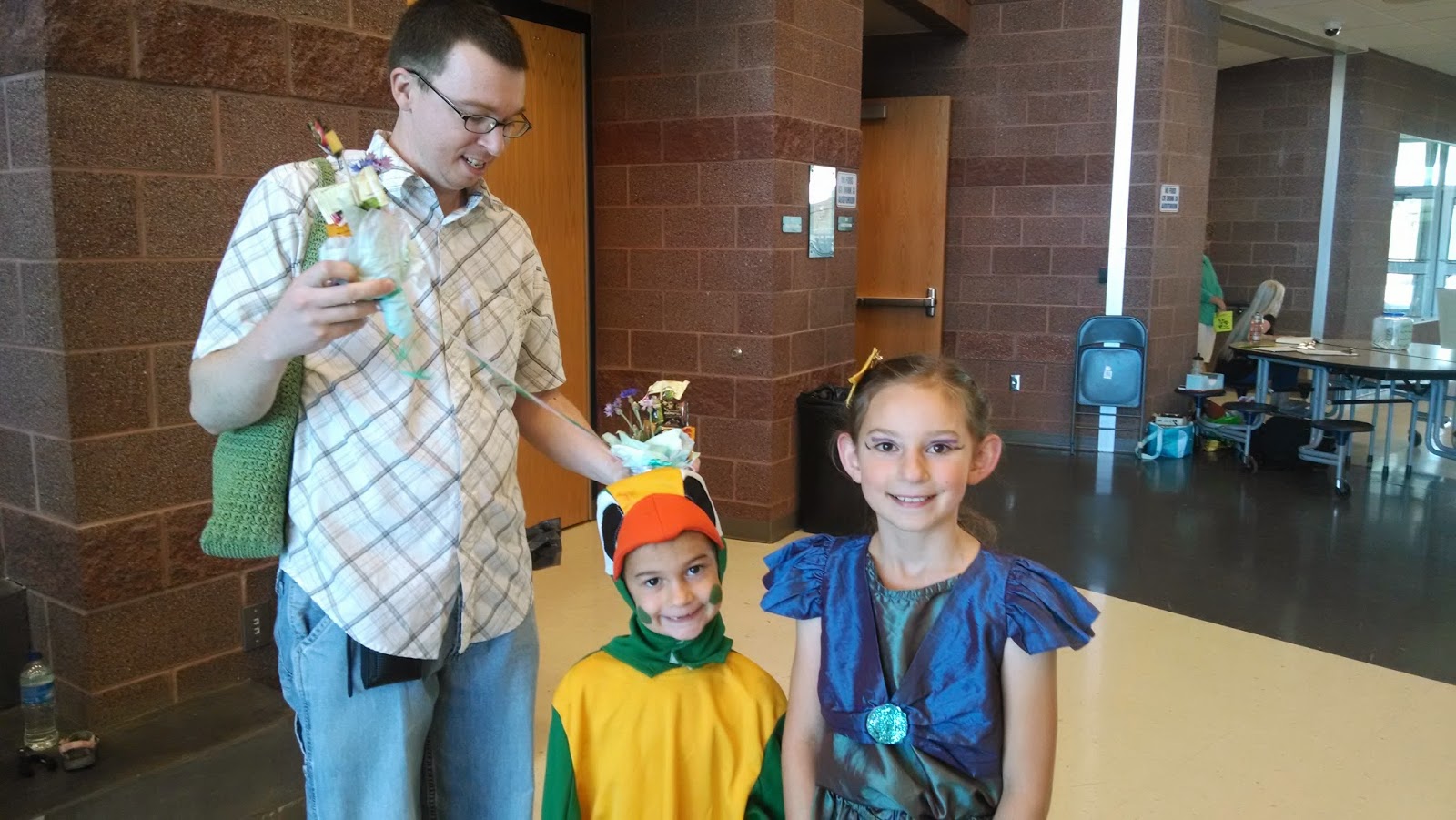 We brought them fresh wildflowers from our patch in the front yard, and a few chocolate treats made into a bouquet. 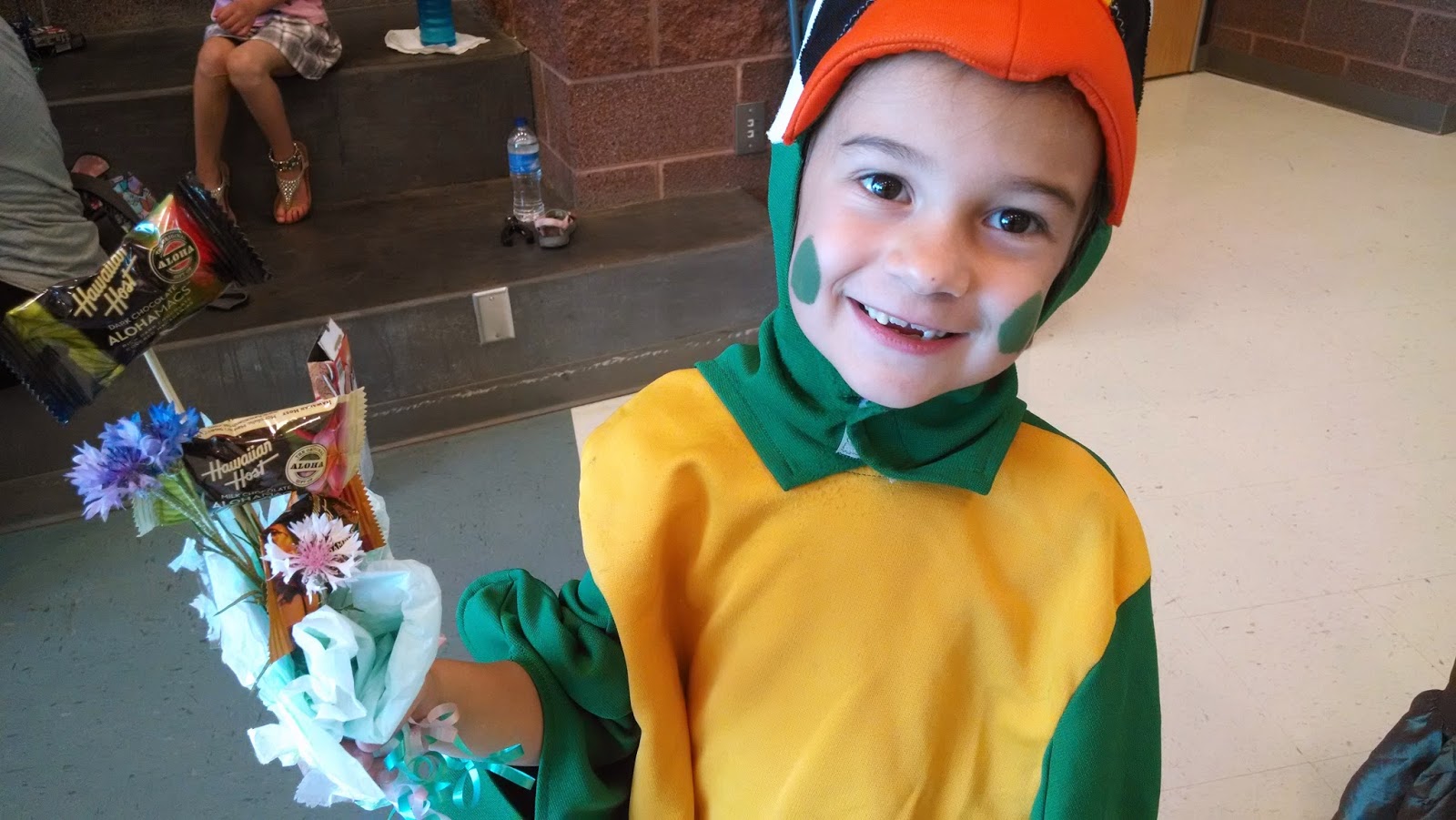 My mom came to the second performance and was so proud of her little parrot and mermaid. 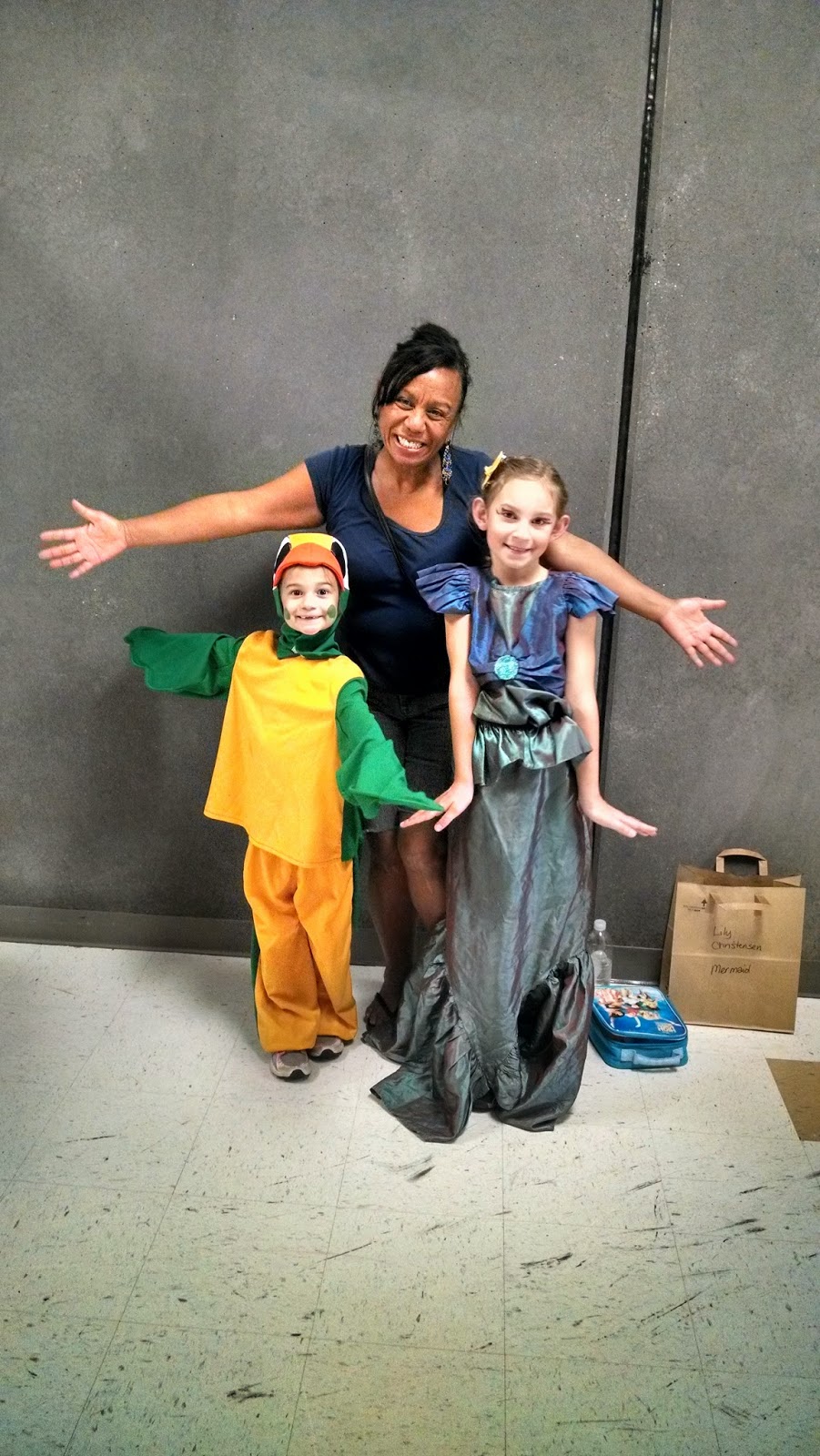 Good job girls!  Until next year! 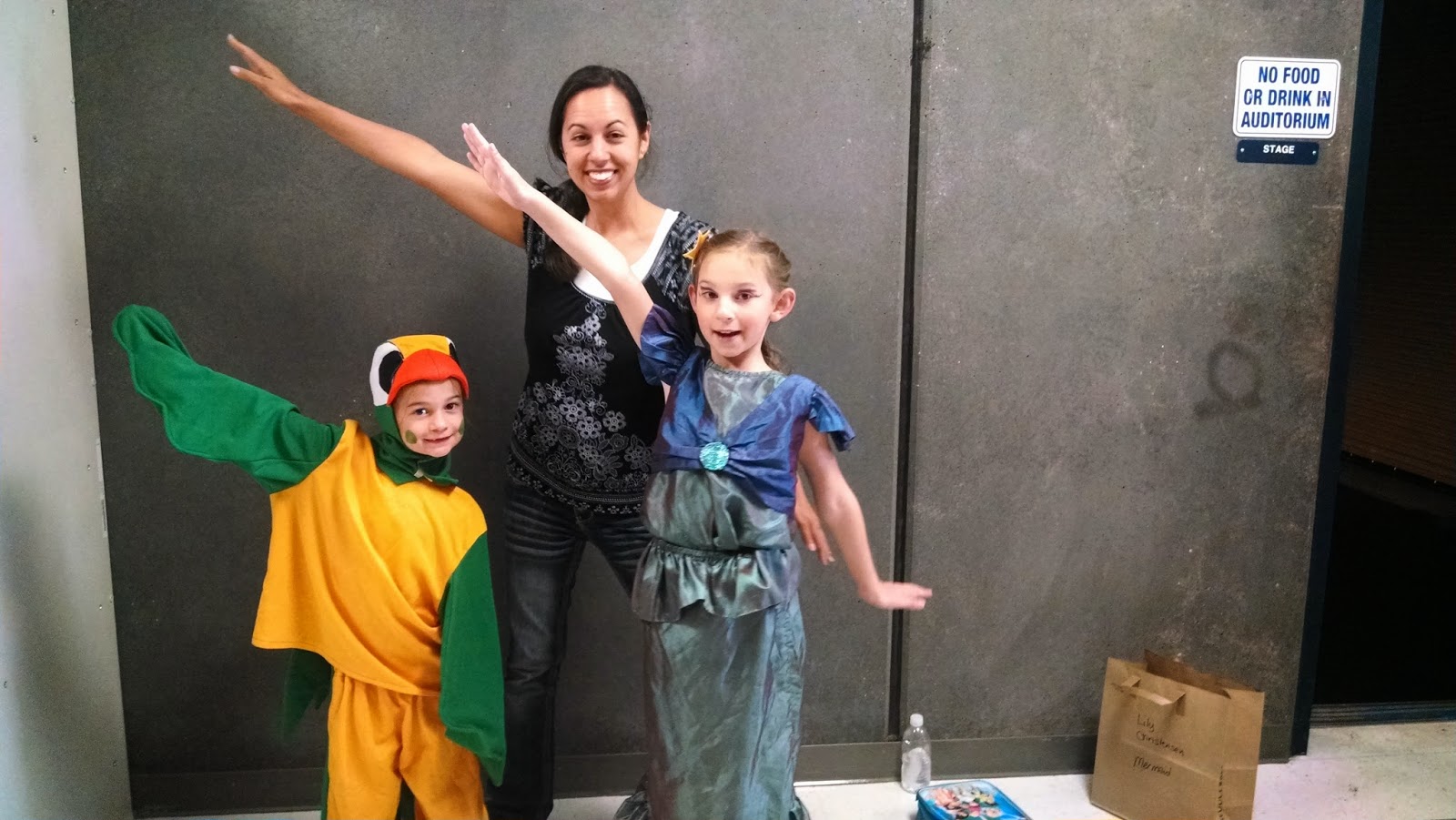 Posted by Stephen Christensen at 9:09 AM

Wow! I didn't know they did this! Good job Lily and Amara- I am so impressed! If they do this again next year you'll have to let us know. I would love to come for the day to see them perform!