Guess what!  We woke up Christmas morning to winter wonderland!  Snow piled 8-12inches (depending where you measured) on the deck, on the cars, on the whole world!  Outside was calm and peaceful, and remarkably beautiful in all the stillness that amount of snow creates. 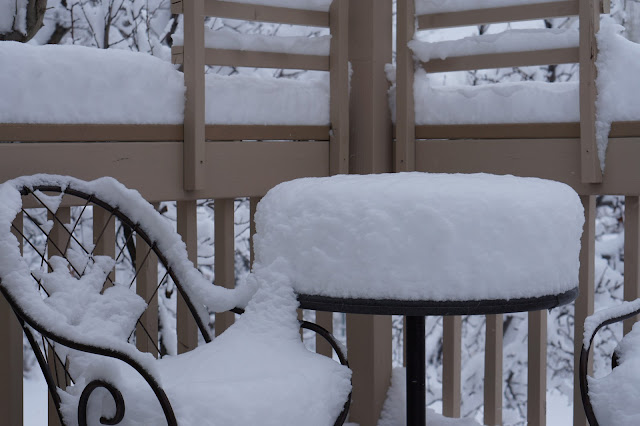 We stayed at Steve's parent's house for our Christmas break, and we had Christmas morning with them.  There were many, many gifts to open this year... 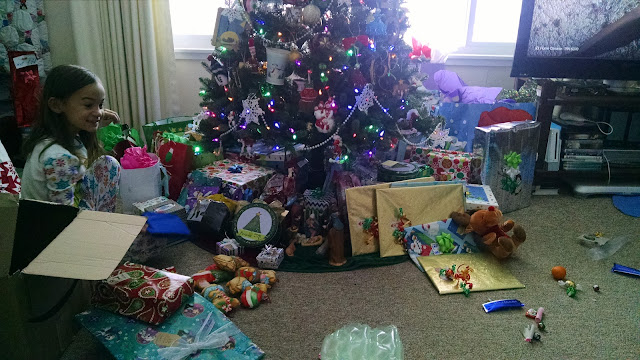 I didn't take a picture of every gift, in fact, my phone camera wasn't working well at all, so I only got a few pictures.  This year, I found so much joy in both giving and receiving.  I was inspired this year by a couple talks given by Dieter F. Uchtdorf.  He said at the 2012 LDS Christmas Devotional,

"This Christmas season and always, I pray that we will see the marvelous gift of the birth of the Son of God through the blessed eyes of a child. I pray that in addition to giving good gifts, we will strive to become good and grateful receivers. As we do so, the spirit of this season will enlarge our hearts and expand our joy beyond measure." 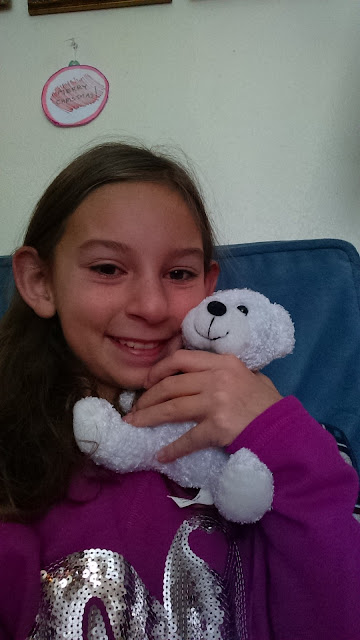 At this year's Christmas Devotional, I was impressed by these words he gave,


"As adults, if we’re lucky, every now and again we can briefly catch a glimpse of what it feels like to be a child once more.

"The thought that someone we love is doing something special for us—and our excitement about the special thing we are planning to do for them—warms our hearts and fills us with love and anticipation. Add to this the glimmering lights, the delightful decorations, the sublime scenes of Christ’s birth, and it’s no wonder Christmas is such a beloved time of year." 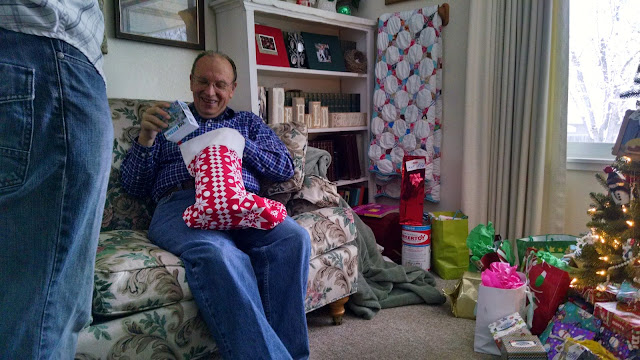 These words rung so true to me.  He talked about the glimmer of lights, delightful decorations, and feeling special in anticipating our intended gifts.  What?  You mean it's okay to say Christmas is also about receiving?  Introspectively, I realized that as a teen and also as an adult, I've focused for so long on giving, giving, giving, that the childlike luster of the season has dulled through the years.  I purposely tried not to even think about the gifts I would be getting.  Some would say, it's better that way, so you're not disappointed, but honestly, it sorta dampers the gift when you open it, even if it was something you really like.  Maybe this sounds selfish, but I discovered this year that there is joy in BOTH giving AND receiving, and I had been missing my opportunity for joy in receiving by blatantly ignoring it.

We are given many gifts from our loving Heavenly Father and Jesus Christ, and our gratitude is of prime importance, but let us not forget that these gifts are given with the intent to make us happy, and excited, and overjoyed, and desire for more.  As we experience the joy in recieving gifts, it changes the way we give gifts as well.  It makes us want to try to have someone else have that same wonderful experience as well.  The gifts we give at Christmas can and should be like that too.  It's okay to be excited to receive, in fact, it's a sign of gratitude to the gift-giver that you appreciate being thought of.  I certainly realize that giving brings incredible joy, especially if you give generously with intent to please or even surprise someone.  Now, this year, I realized that I finally found something that I had been missing for so long.  Christmas this year was so much more magical as I looked forward to not only giving generously, but also looked on with excitement at the gifts I would be receiving as well. 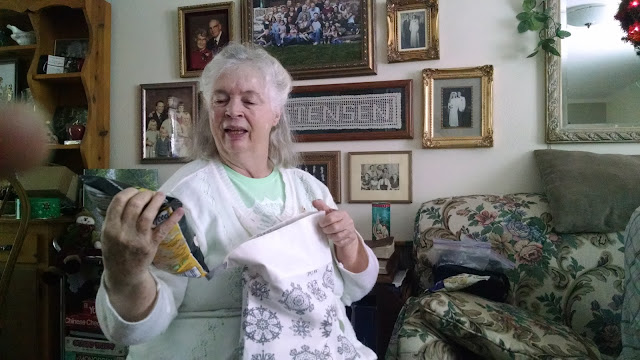 I let my kids secretly go online shopping with me for their sister and their dad.  Amara knew she wanted to give Lily the White Kyerum deck for the Pokemon card game.  Apparently, it's pretty powerful.  What she didn't know is that Lily wanted to give her the Black Kyerum deck, again pretty powerful.  So on Christmas, Amara opened her gift first and was so excited to see that Lily gave her that deck, but she was even more excited to see Lily open her gift, so she found it under the tree, and Lily opened it right away... 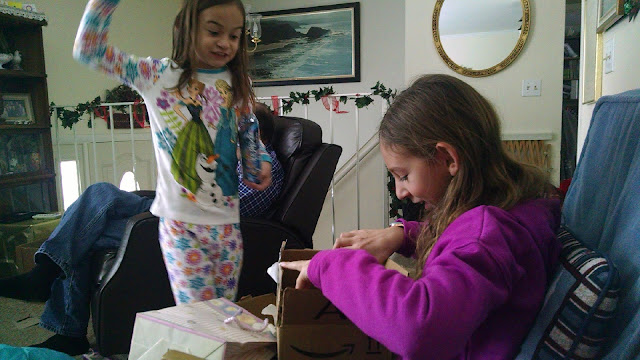 Lily's eyes lit up as she unwrapped the White Kyerum deck, and both girls had a good laugh.  Neither of them were expecting to receive those gifts, and I was the only one who knew that they were secretly giving them to each other. 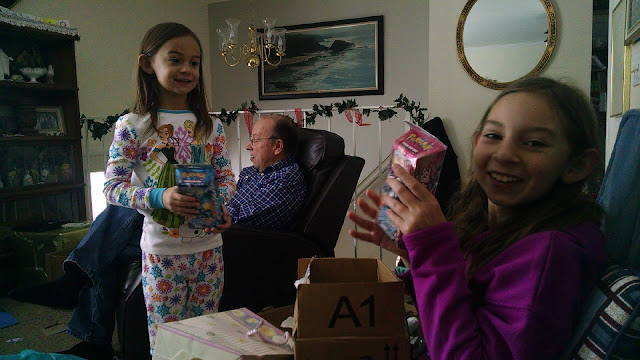 It was the joy of gift giving and receiving! 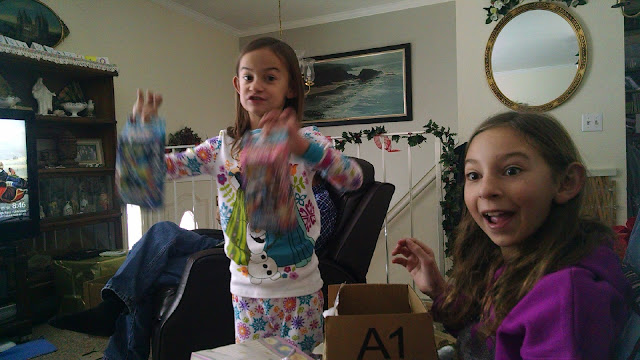 When I asked Steve what he wanted for Christmas earlier in the month, he responded exactly as I had thought he would, with the single word, "Nothing."  But I wanted this year to be different.  Remember, I had been inspired by Dieter F. Uchtdorf, and I wanted to bring back the magic.  So, I didn't take that for an answer.

"No, Steve.  Really, what do you want, if money wasn't an issue, what would do you really want?"
He was a little annoyed that I didn't accept his swift answer as I usually had in the past, so he obliged me with, "You want to know what I really want?  I want five-thousand dollars!"

I thought he was just be short with me, so I prodded, "$5,000.00?  What would you even do with that?"  To which he responded with a short, but costly list of technology that he needed/wanted in order to do some of the cool things he'd like to do with his photography and which he would need if he were to ever start up his own business.

I could tell he had thought and thought on that, because he knew the prices and the products he wanted, but he knew five-thousand was an insane amount to spend on himself, so he didn't even think it could be possible.  I said, "Huh.  I see." And I left him in peace.

I knew we didn't have that kind of money in our bank account, but the thought occurred to me that I should check our other bank account that we hardly ever use, yet we sometimes will deposit in it since it is local, and the bank we actively use is 2 hours away.

I went in to the local bank to check, and HOTDOG!  That account has been accumulating for a few years, and there was Steve's gift.  I just had to withdraw it, wrap it, and wait.  I wanted it withdrawn in thousands, but the bank only carries hundreds, so I had 50 hundreds to give.  Amara helped me, as we bought a really cheap box of chocolates and a tin of cookies at the family dollar, dumped out the contents, and filled the empty containers with folded up hundreds.  We wrote on the box and tin that these were not to be shared, and were Steve's only.

On Christmas, he opened it, saw the containers and fully expecting to find some crappy cookies and chocolates.  Then, I insisted he should not share any of it with anyone else, and he decided to have a chocolate.  He opened the box up, but when he saw the hundreds, his look went from confusion (What the?), to amazement (This is money! A lot of money! How much money?), to confusion (Is this real?  Where did she get all this from?), and then to joy (It is real, and it's for me!).  It was priceless. 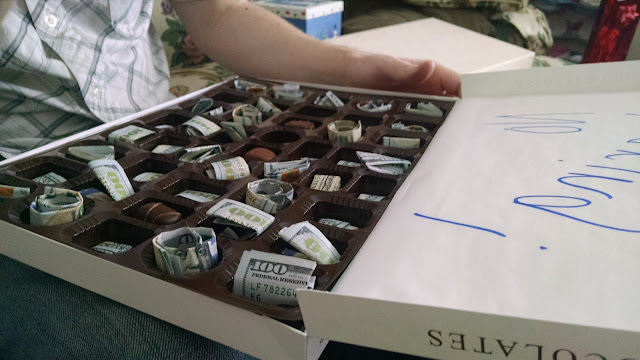 The gift required a little explanation.  I told him and his parents who were all in awe, that the money was ours and came from our hardly-used bank account, and that what he had sitting in front of him was five thousand dollars to be used for those expensive things he wanted to get for his photography or other business ventures.  I then related the story of our conversation earlier in the month, and Steve didn't even remember telling me he wanted the $5,000.  He really thought it was an impossibility, so he never thought about it again.  That made it all the sweeter to see him open this gift.  He loved it, and he's been buying up those few, yet expensive items he wanted. 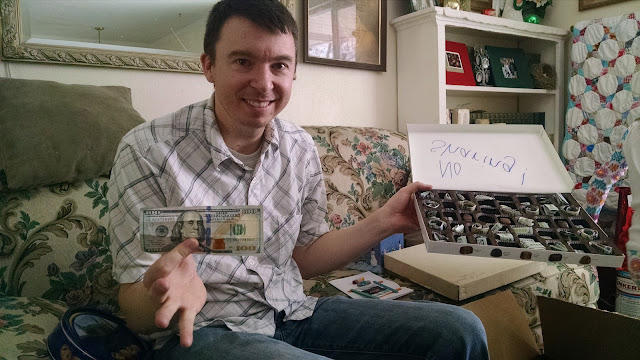 He got all he wanted for Christmas, and some!  We ended up wrapping the chocolates and cookies in another box for him to open last, and it said that, "These can be shared."

Amara asked Santa for this glow pet, but guess what!  Steve and I had already bought her one, so Santa didn't have to :) 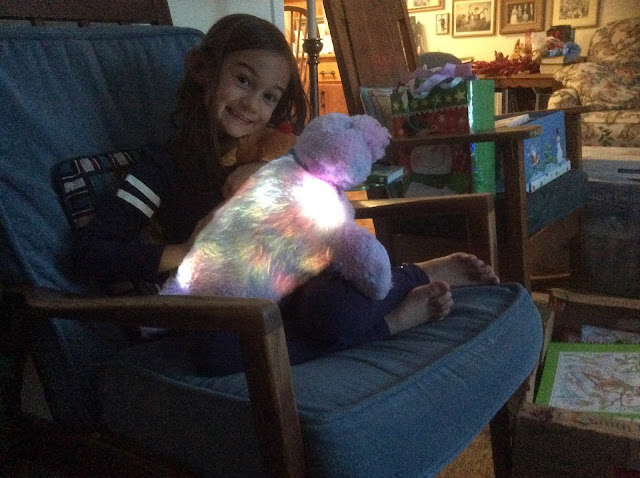 We had a wonderful time unwrapping gifts!  I don't have pictures of what I got, but I was so spoiled this year!  I'm so grateful for all those who thought of me and gave me gifts.  I had requested to my sweet husband that I'd really like to open some gifts this year, and I'm looking forward to it.  I told him he didn't have to spend a dime, but I wanted a surprise to open on Christmas.  Let me tell you, he took that all to heart and spent hours and hours on my gifts.  He created an ebook called, "Lani's Book," and it has poems and short stories he spent hours creating.  When the girls awoke and came in our room Christmas morning, Steve reached over, handed me the kindle, and said, "Merry Christmas.  I made this for you."  It touched my heart as I scrolled through all his hard work and determination to get this done for me for Christmas.  I read through some of it then, and I was not let down by the high-caliber compositions he put together.  I seriously have an incredibly talented, smart, and sweet husband.   When I went upstairs to unwrap gifts beneath the tree, I got all things I love- homemade gifts from the girls, a couple watches from Santa (a beautiful, 2-toned, dressy one, and a really cool PebbleTime smartwatch), A pressure canner (YES!!!), Cutco knives with lifetime sharpening (LOVE!) some undershirts, a cozy blanket, and other gifts I can't remember right now.

Steve told me later that when he was planning my gifts he decided he was going to give me something homemade (ebook), something I need (sharp knives), something fun (watches), and something he thought I would like (pressure canner).  That was clever of him.

We spent the rest of Christmas relaxing at home with family and enjoying our new gifts.  :) 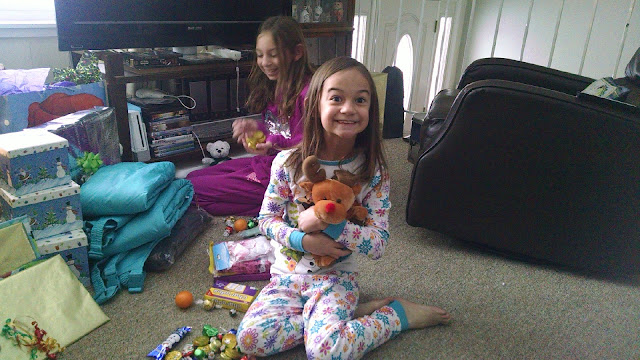 Posted by Lani Christensen at 4:54 PM