Chore Callings in the Christensen Kingdom

We implemented a truly life-changing chore system.  It took a bunch of creativity, but luckily in this household, that is not on short supply.  I bet you're wondering how all this came about.  Well, it went something like this.

So, Steve and I talked about how we were doing a swell job of ignoring the growing issue in our home of chore meltdowns.  It shouldn't have to be this hard!  I've seen kids on TV who wake up before dawn cracks and they are stoking the fire and milking the cow with not a word of complaint.  After a couple hours of chores under their belts, they mosey in for breakfast with smiles on their faces and energy in their souls ready to begin their mile-long walk to school. Why wasn't that happening in my home?

Is it because we don't have cows to milk or a fire to stoke or a mile-long walk to school?  I think so.  So, it was time to come up with some cows to milk and fires to stoke.  A cow on our property would be impractical, especially a milk cow since we only go through about a gallon of milk per week, so I looked around and lo and behold, there was a floor to be swept, dishes to be done, books laying on the ground, shoes in the middle of the entry, and various half-finished projects strewn on every flat surface we owned.  "I think I found our cow." I thought to myself as the momentum began to build in my mind.  We would have a system of chores and we would commit to it as an entire family and it was going to be epic!

I got to work creating what I deemed a fair share of the chores.  I divided them into areas of the home and I created a sheet so we could remember what chores were ours.  Steve goes to work every week day, that's his chore.  On the weekend he is in charge of helping one of his children with their Saturday responsibilities, this way he gets some bonding time doing hard work with his kids, and he also can help train them on what a good job looks like. 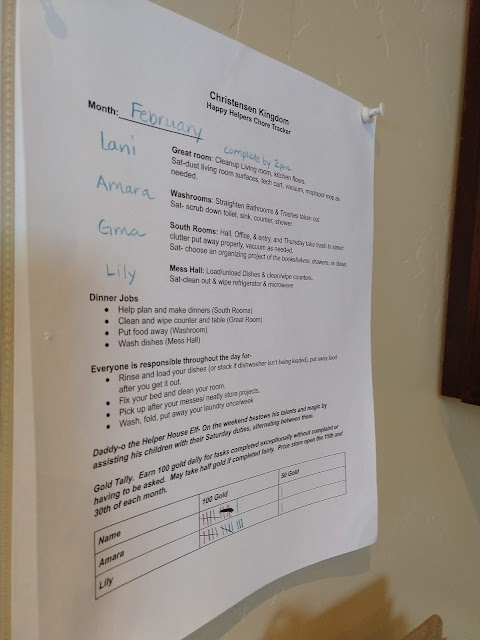 After I got everything organized and typed up, Steve and I talked it over and came up with a way to present it to everyone.  We called a family meeting on Saturday morning, which piqued everyone's curiosity, and we made sure to keep things secret so we could reveal it as a big surprise.  We brought out our book-safe and in it contained 4 small rolled-up scrolls of paper.  This was very official and everyone could tell we meant business!  Amara could hardly contain herself.  She couldn't wait to see what was on those scrolls!  Lily looked less than impressed, I think that's because she saw me printing our old chore prize sheet earlier that morning, so she had a clue-in on what this might be.

So, we let Amara go first.  She took a scroll and read, "You are hereby called to serve in the washroom region of the Christensen Kingdom..." She couldn't finish.  Steve and I began cheering loudly with much excitement for her.  She paused and realized this "surprise," was somewhat disappointing. Her smile turned from genuine to fake in about .3 seconds.   She went on to read, "You are assigned to labor in this region for this month.  Your responsibilies will include..." and it went on describing her chore mission.  She had to try hard to keep the tears from breaking from her eyes, but she accepted her call with the best attitude she could muster.  We then took the book of scrolls around to Lily, grandma, and me (Steve actually read mine because I was video recording this), and we each one by one read our calls aloud and cheered for one another.

When all the calls were issued, we answered questions and laid out our expectations.  We then announced the opening of the Christensen Kingdom Store.  It is open on the 15th and last day of each month.  As daily chores are done, gold tallies are earned and may be spent on any number of goods at our store.  The kids helped come up with the store prizes themselves several months ago (when we tried a different chore system that was based online.  That worked for a whole week). We have our gold tally tracker and store prize sheets hung up on our wall in the kitchen. 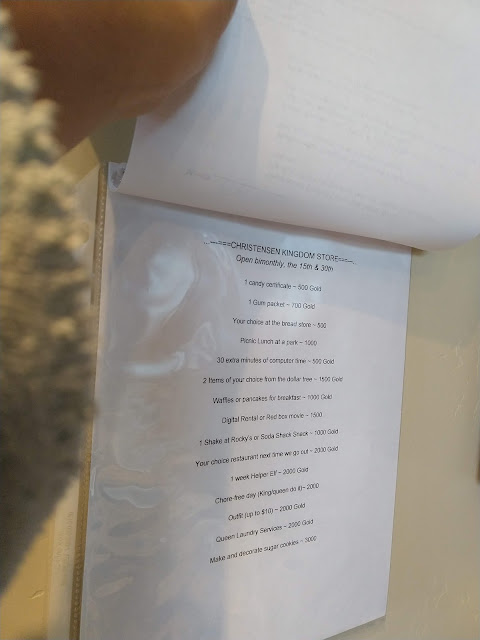 We started that day, so everyone got to work on their Saturday chores and did a phenomenal job cleaning!  I am happy to report that this system has been in effect for over a month now and it has been amazing.  My kids know their responsibilities for the day, and they do them because if they put it off, it's more work for them and no gold.

The first store opening was a hit.  Amara purchased a "candy certificate" for next time we were at the store, and a snow cone at the Soda Shack.  These are more special than before because we also have implemented a no sweets policy in our home unless it's a holiday.  Treats served at birthday parties or mutual are fine to eat a serving when you're there, but treats in our home are reserved for special occasions now.  We have even packed away the sugary sweets into a tote so they wouldn't be tempting.

Lily decided to save her gold tallies so she could accumulate enough for some new cute boots.

Another win is the fact that our house is definitely cleaner and my load has been lifted.  I'm also really proud of my kids for doing housework.  It's building their character whether they realize it or not.  It warms my heart to walk into my bathroom and smell the lingering scent of clorox wipes and see Steve's pajama pants neatly folded on his hamper.  I melt when I grab a pan from the dishrack and it shines my smile back at me or I open the microwave and it's clean.  But what really makes me happy is seeing my family willing to work together to make our home a happier one. 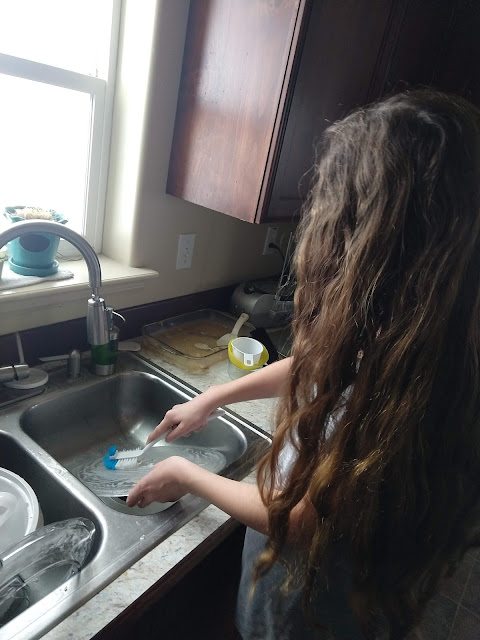 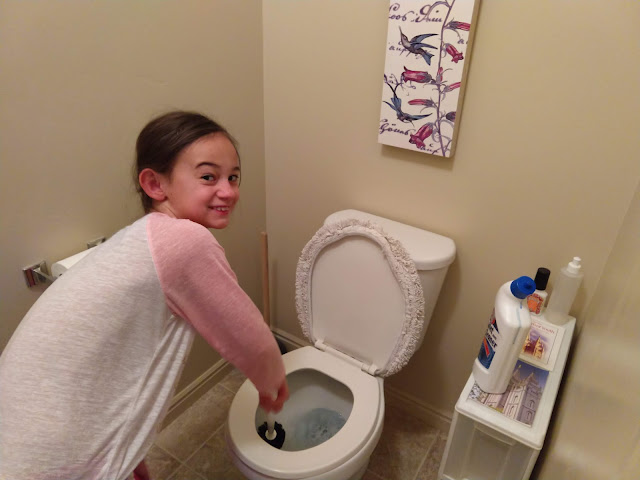 Posted by Lani Christensen at 7:30 PM