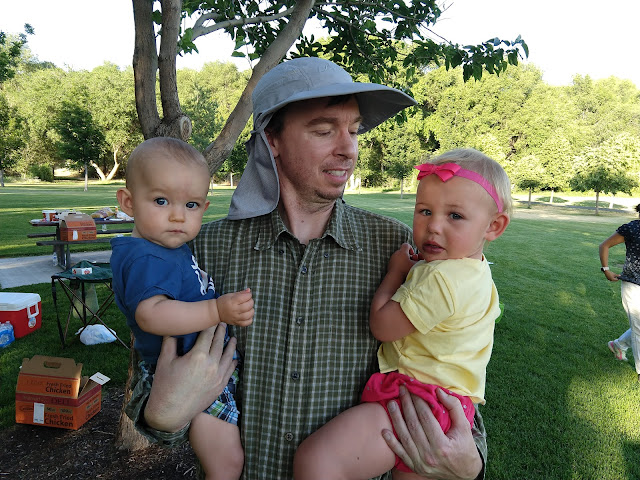 I made the suggestion to my mom that she should host a reunion this summer since my brothers that live far away would be here at the same time.  She loved the idea.  We kicked ideas around and gave everyone a heads up on the dates so we could be sure we could get everyone there.  We eventually  agreed upon a stay-cation-type reunion where we save money by not lodging together and just allowing people to sleep in their own beds at night.  We just planned day activities for everyone.  I came up with some ideas, ran them by mom, she changed a few things, and eventually a plan was set, we invited everyone via facebook and went with the flow.

Picnic dinner at the Park provided by Lani. Originally planned for JC Park in American Fork because it has grass, playset, ball field, shade trees, and is pretty secluded as long as there isn't a ball game scheduled that night.  When I took a jaunt over to that park in the morning I discovered they got rid of the port-a-potties- YIKES- no bathrooms was not an option for us.  So, I had to change the plan.  Steve and I drove up to Art Dye Park (also in American Fork) in the afternoon to see what it was like and it seemed perfect.  Tons of open space, some tall trees, even a disc golf course, and only 1 other car there.   I changed the location, told everyone to bring picnic blankets or lawn chairs and we were set for the Art Dye Park.
When we all arrived that night, so did the rest of the families in the valley.  The parking lot was loaded with cars, there were ball games and practices happening, and people were disc golfing right into our picnic area!  I was disappointed in the crowded location, but since we were all there and the table I wanted was available, we shrugged off the let-down and set up for our picnic and started our reunion kickoff.

We planned some activities after dinner:
-Family ball game (didn't end up having time/ energy for)

-Relay Races (fun times for the kids, but the best one was the adults race.  I can't believe I came in last place both times! Gotta check out the slow-motion video posted on Facebook under the reunion page.)
-Marshmallow shooters fun (I had Lowes cut up PVC pipe for me which became our shooters and we all ended up having a blast)  We started off with teams, but it was too hard to keep track of, so it became everyone for themselves.

Minor crisis: Tommy (3 years old) wandered off when we weren't watching and we stopped everything while adults all went hunting for him.  Devon was in tears because he missed his brother and he was worried.  I stayed and tried to keep track of the other little kids.  Maybe 10 minutes later, I got word they had found Tommy at a playground across the parking lot, near the restroom.  He probably followed one of us to the bathroom, but got distracted by the playground and decided to play.  We were all relieved to find him!

Major surprise: Who should show up as we were picnicking and partying?  It was Missy!  She was able to arrange sitters for her grandma and to fly here on standby from Hawaii and surprise us all!  It was a blessing she was able to come after all!  We were in the middle of games when a gorgeous woman starts walking towards our group and says something about the Lauret's really know how to party.  I saw she was with Debby (who picked her up from the airport and brought her to us), but it didn't register in my mind who she was.  I started walking towards her because it looked as though she wanted to talk.  When I got closer, it clicked!  I shouted, "Missy's here!"  We all came and gave her hugs and her kids were so happy to see their mommy.

We started off with lunch and hanging out.  Let it be known that the food was so VERY delicious!  There was an enormous amount of tasty food!  We were so glad there was plenty because we ended up using the leftovers for our dinner that night.  There was smoked briskit, chicken, and pulled pork, as well as chips, salads, fruit, corn on the cob, drinks, and probably a bunch of other dishes that have slipped my memory since that time.

Joe's family decided to do other things in the morning just with their family since Missy was only there for a short time.  They joined us later that evening at the church.

Afternoon-
Kids took naps and played while adults took naps and visited in the living room.  We role played job interviews with eachother building up Micah and Jake's skills since they were both on the hunt for work.

Later, we took a hike to Grotto Falls (short, shady, play in water) up Payson Canyon about 15 min drive.
It was pretty up there! 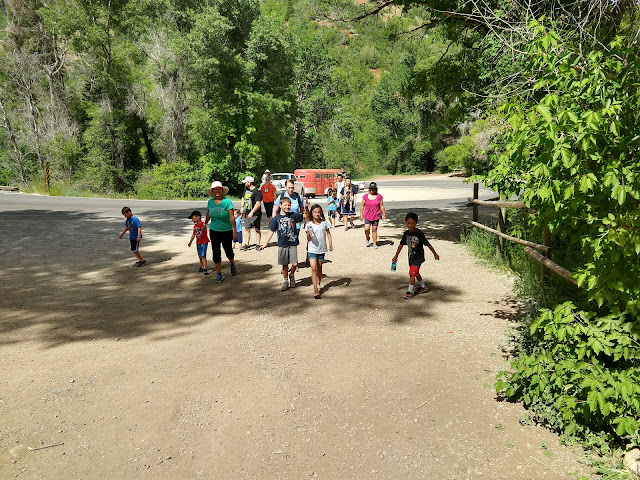 Steve made a short youtube video about our hike, which makes me smile.  Hopefully the following link works. 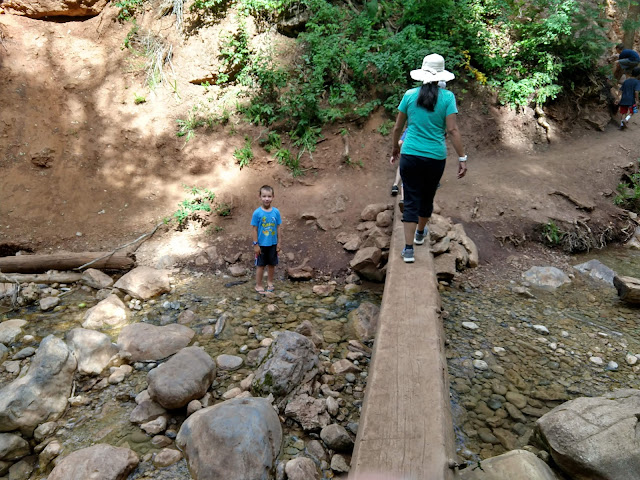 Evening- 5pm-8:30pm - At a reserved church in Payson (April will reserve).

We had originally planned a delivered dinner at the church provided by grandma, but that plan changed because there was so much plenty leftover from lunch, so we just brought the leftovers to the church and heated it all up.

After eating, we did our Friday Family Home Evening where "Gwamma" Bobbie shares a testimony to her kids/grandkids. Her 10 minute lesson turned into 45 minutes, reminiscent of our scripture/thought bedtime routine as kids.  She did make it fun though as she had the men of the families act out a scripture story of the crippled man who was carried by his friends and taken to see Jesus to be healed.  Jake got to be the crippled man and mom had made a stretcher of sorts out of a blanket and 2 brooms.  Mom shared the story and many truths that it teaches us, as well as her testimony.

We had planned the following other activities, but our time ran short:
Lily to lead us in family history game.
Paperbag Skits.
Family BBall game.

The following was the original plan:

***ALL CHILDREN OF JIM LAURET: PLEASE BE EARLY TO AVOID EXCESS HEAT AND WRATH (Spouses and Kids can come with you and help or later for the brunch depending on what you want to do)***

7am - 10am Early Morning Work Party @ Grandpa Jim's. He needs help with some yard work including removing certain bushes from the front yard, and cleaning out the garage.

After brunch-
Finish any "Daddy" projects if need be.
Play board games, hang out, rest.

Evening-
CRAZY Spaghetti Dinner- eat on grandpa Jim's side yard. Provided by Grandpa Jim and anyone willing to help.

What actually happened was this.  We showed up right on time at 7am and knocked on dad's door.  He answered with sleep still in his eyes and a croak in his voice as he said, "Wow.  I know you said 7am, but I didn't think you'd actually be on time."  I was pretty adamant about starting early because I can't work well in the heat of day without a POTS flair up.  We got to work right away.  It was a work party all day ripping out bushes and cleaning out the garage and taking loads to the dump.

Dad forgot to get makings for a spaghetti dinner, and everyone was too exhausted to cook that we just ordered pizza.

Take a look at our progress:

That concluded the reunion.  I'm so glad everyone chose to participate and make it happen because we all had a great time.
Posted by Lani Christensen at 7:46 AM